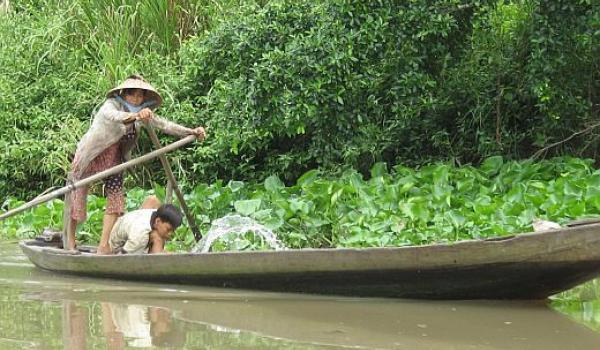 Freshwater ecosystems and species are a key feature of nature in Asia. Asia hosts some of the world’s greatest rivers; the Salween river is the seventh longest free-flowing river in the world; and the Meghna is one of the last remaining, long, free-flowing rivers globally.

The Mekong basin is the third most biodiverse river basin in the world. Freshwater ecosystems in Asia host a large number of globally important species, including (among many others) the gharial, freshwater turtle species (e.g. Yangtze giant softshell turtle), otter species, South Asian river dolphins, a large diversity of endemic fish (e.g. the Giant Mekong catfish) and hundreds of waterbird species.

Wetlands are also a key feature of ecosystems in Asia. The Meghna basin hosts more than 1,000 large wetlands (haors), whilst the Tonle Sap lake in Cambodia helps sustain the vital flood pulse of the Mekong. The region is also renowned for its large coastal wetlands, such as the Sundarbans and the Yellow Sea mudflats.

Despite their value in term of biodiversity and ecosystem services, freshwater biodiversity and ecosystems in Asia are experiencing unprecedented rates of degradation and conversion. As an example, it has been estimated that around 80 percent of the region’s wetlands are threatened with conversion to agricultural land and development. Freshwater fish make up over a third of all Critically Endangered vertebrate species in South-east Asia and many freshwater species are threatened by overfishing; population declines of more than 80 percent have been recorded over the last 20 years for some species. The increasing demand for energy in the region is driving the development of hydropower plants, significantly impacting water and sediment flow as well as fish migration.

These pressures, compounded by climate change, lead to increased water stress, negatively affecting economic growth and countries’ natural resource base, the collapse of inland fisheries and contributing to migration and regional instability. This stress is already evidenced in critical regions like the Mekong basin, the Ganges Brahmaputra Meghna basins and the Himalayas, which face frequent flood and drought episodes, putting human lives and livelihoods at risk.

Most of the country-led responses to water management are infrastructure-based (e.g. reservoirs and dikes, irrigation mechanisms) that only increase the pressure on freshwater ecosystems.

Cooperation frameworks on water, when they exist, are limited in scope, do not consider ecosystems, are outdated or lack the necessary legal strength to ensure sustainable use of the resource. As an example, to this day, Viet Nam is the only country in Asia to have ratified the United Nations Watercourses Convention (UNWC), enabling its entry into force. Despite a growing body of evidence demonstrating the weaknesses of the Mekong River Agreement, no efforts are being made by governments to strengthen their agreement.

Water management is highly political in the region and is often seen by governments as a matter of national sovereignty or belonging to the diplomatic track. As a result, water dialogues leave little space for communities, civil society and indigenous groups - who are often the most affected by infrastructure projects - to contribute and take part in the discussion and to make their rights to water prevail.

IUCN’s Regional Water and Wetlands Programme in Asia is designed to tackle the three pillars of water management, including: i) promoting the conservation and restoration of key freshwater ecosystems and species; ii) enabling effective hydro-diplomacy in the region, leading to inclusive and effective water governance frameworks; and iii) supporting investment in the potential of freshwater ecosystems to provide Nature-based Solutions to pressing societal challenges in the region (e.g., climate change, food security, water security).