Women and men in coastal communities are often closely connected to their coastal ecosystems and gender roles are often traditionally identified and clearly divided. Women and men differ in how they interact and depend upon mangroves – how they use the ecosystem, which mangrove products they choose, and the benefits they receive. 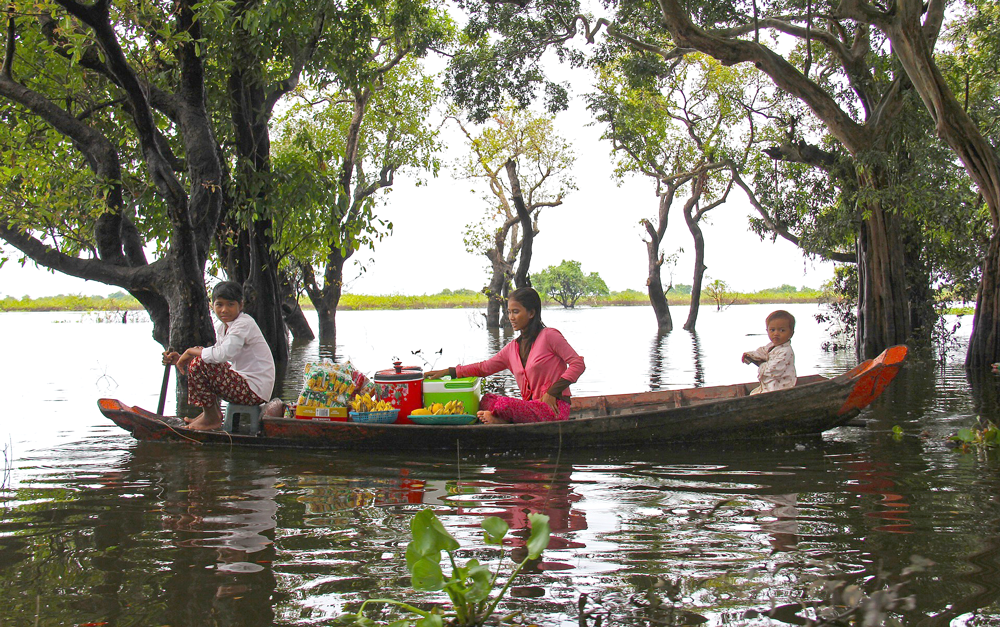 Mangrove forests are particularly rich in directly harvestable seafood, timber, firewood and other plant products such as tea and roofing materials. They also provide vital protection against floods and storms and buffer against sea level rise. Especially in developing countries, coastal communities are directly dependent on products and services gained from mangrove forest ecosystems.

Unfortunately, many years of unsustainable human use, largely driven by demand for resources and products on the international market, has led to large-scale overexploitation and destruction of mangrove forests. The consequences of disappearing mangroves have been particularly detrimental to the lives and livelihoods of the local people. Global conservation efforts are now engaging local communities in their actions to reverse this dangerous trend.

Acknowledging the different roles women and men have in the ecosystem and community is essential in any conservation initiative. It allows for their differentiated inputs and impacts and promotes specific responses women and men could, and should, undertake. Despite today’s widely applied concept of integrating local communities in conservation efforts, there is a great risk of overlooking the particular interests and potential contributions of marginalised community members such as women. This can happen all too easily because women often have less social, economic and political power. Due to entrenched inequitable structures and barriers, they have a reduced influence in the decision making process within their communities.

Fortunately, integrating a gender-responsive approach into conservation efforts is currently gaining global momentum with significant results toward empowering women and enhancing gender equality. For women some of the potential consequences of a gender-responsive approach are increased food and water security, gained leadership and voice, improved health, security, education and skills development as well as improved livelihoods and income. IUCN’s Global Gender Office highlights and supports this approach to ‘ensure gender equality is central to sustainable global environmental solutions’ in a range of issues. Particularly around the conservation and restoration of mangrove forests, IUCN, its partners and other organisations are active in several projects working to integrate gender considerations and responses.

Mangroves for the Future (MFF), an initiative co-chaired by IUCN and the United Nations Development Programme (UNDP), is running mangrove restoration and sustainable development projects with gender integration as a core strategy in several Asian countries. Participatory, community-based project approaches ensure that women’s and men’s voices are considered equally and aim to improve women’s social and economic empowerment. Some MFF projects have supported women through sustainable livelihoods and financial leadership training which provides them with alternative livelihoods and income opportunities. For example, where women have received training on the advantages of cultivating mangrove plants, the resulting increases in fish stocks have provided an additional income opportunity. Moreover, their newly acquired financial skills have ensured higher business success.

In Vietnam, gender integrated management in Xuan Thuy National Park allowed local impoverished fisherwomen to build sustainable livelihoods while actively contributing to the park’s conservation. Before, these women depended on increasingly scarce harvests of shells, molluscs and crabs, gathered illegally within the park’s mangrove forests. Although now the women continue to collect those products – through sensitisation, awareness raising and training for gender equitable management, women have become actively involved in the management and monitoring of the resources – contributing to sustainable harvests and securing a sustainable future for themselves as well as the park.

The Guyana Mangrove Restoration Project saw women take a central leadership role with their efforts to increase the resilience of Guyana’s coasts against flooding and coastal erosion – a threat which mostly affected women. Women were provided with resources for economic empowerment and capacity building trainings, which allowed them to set up various businesses including honey production, tourism activities and mangrove cultivation. The active participation of women even led to the establishment of a women-led volunteer organisation for mangrove awareness and restoration as well as the ‘Mangrove Cooperative Society’ to support other women with training and resources on beekeeping.

In Kenya, women engaged in ‘Mikoko Pamoja’, a mangrove conservation and restoration project co-ordinated by ACES, maintain ‘The Gazi Women Boardwalk’ to promote conservation education within the mangrove forest. Through this initiative the women have proven their effectiveness in contributing to ecotourism while generating income for their community’s schools as well as contributing to better health care and reliable water supply.

These positive examples show that integrating gender equality into conservation initiatives is not only key to the success and sustainability of projects but can contribute additional value to its outcomes in supporting both women and men with various benefits for their homes, communities and nations. A gender integrative approach recognises women not as passive project beneficiaries, but as active drivers of change toward conservation, sustainable development and their own sustainable livelihoods.

Today, July 26 is World Mangrove Day and IUCN will be announcing powerful new collaborations to protect and restore  the world's mangroves. Stay tuned!

This article series on mangrove restoration is written by IUCN's Global Marine and Polar Programme with the support of Germany's International Climate Initiative (IKI) through the IUCN Global Forest and Climate Change Programme.