An international panel of marine scientists, including IUCN experts, is demanding urgent remedies to halt ocean degradation based on findings that the rate, speed and impacts of change in the global ocean are greater, faster and more imminent than previously thought. 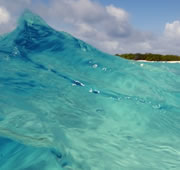 Results from the latest International Programme on the State of the Ocean (IPSO) / IUCN review of science on anthropogenic stressors on the ocean go beyond the conclusion reached last week by the UN climate change panel the IPCC that the ocean is absorbing much of the warming and unprecedented levels of carbon dioxide and warn that the cumulative impact of this with other ocean stressors is far graver than previous estimates.

Decreasing oxygen levels in the ocean caused by climate change and nitrogen run-off, combined with other chemical pollution and rampant overfishing are undermining the ability of the ocean to withstand these so-called ‘carbon perturbations’, meaning its role as Earth’s ‘buffer’ is seriously compromised.

Professor Alex Rogers of Somerville College, Oxford, and Scientific Director of IPSO said: “The health of the ocean is spiraling downwards far more rapidly than we had thought. We are seeing greater change, happening faster, and the effects are more imminent than previously anticipated. The situation should be of the gravest concern to everyone since everyone will be affected by changes in the ability of the ocean to support life on Earth.”

The findings, published in the peer review journal Marine Pollution Bulletin, are part of an ongoing assessment process overseen by IPSO, which brings together scientists from a range of marine disciplines. The body’s previous 2011 report, which warned of the threat of ‘globally significant’ extinctions of marine species, received global media attention and has been cited in hearings at the United Nations, US Senate and European Parliament as well as the UK Parliament.

IUCN’s Professor Dan Laffoley said: “What these latest reports make absolutely clear is that deferring action will increase costs in the future and lead to even greater, perhaps irreversible, losses. The UN climate report confirmed that the ocean is bearing the brunt of human-induced changes to our planet. These findings give us more cause for alarm – but also a roadmap for action. We must use it. “

Among the latest assessments of factors affecting ocean health, the panel identified the following areas as of greatest cause for concern:

• De-oxygenation: the evidence is accumulating that the oxygen inventory of the ocean is progressively declining. Predictions for ocean oxygen content suggest a decline of between 1% and 7% by 2100. This is occurring in two ways: the broad trend of decreasing oxygen levels in tropical oceans and areas of the North Pacific over the last 50 years; and the dramatic increase in coastal hypoxia (low oxygen) associated with eutrophication. The former is caused by global warming, the second by increased nutrient runoff from agriculture and sewage.

• Acidification: If current levels of CO2 release continue we can expect extremely serious consequences for ocean life, and in turn food and coastal protection; at CO2 concentrations of 450-500 ppm (projected in 2030-2050) erosion will exceed calcification in the coral reef building process, resulting in the extinction of some species and decline in biodiversity overall.

• Warming: As made clear by the IPCC, the ocean is taking the brunt of warming in the climate system, with direct and well-documented physical and biogeochemical consequences. The impacts which continued warming is projected to have in the decades to 2050 include: reduced seasonal ice zones, including the disappearance of Arctic summer sea ice by ca. 2037; increasing stratification of ocean layers, leading to oxygen depletion; increased venting of the GHG methane from the Arctic seabed (a factor not considered by the IPCC); and increased incidence of anoxic and hypoxic (low oxygen) events.

• The ‘deadly trio’ of the above three stressors - acidification, warming and deoxygenation - is seriously effecting how productive and efficient the ocean is, as temperatures, chemistry, surface stratification, nutrient and oxygen supply are all implicated, meaning that many organisms will find themselves in unsuitable environments. These impacts will have cascading consequences for marine biology, including altered food web dynamics and the expansion of pathogens.

• Continued overfishing is serving to further undermine the resilience of ocean systems, and contrary to some claims, despite some improvements largely in developed regions, fisheries management is still failing to halt the decline of key species and damage to the ecosystems on which marine life depends. In 2012 the UN FAO determined that 70% of world fish populations are unsustainably exploited, of which 30% have biomass collapsed to less than 10% of unfished levels. A recent global assessment of compliance with Article 7 (fishery management) of the 1995 FAO Code of Conduct for Responsible Fisheries, awarded 60% of countries a “fail” grade, and saw no country identified as being overall “good”.

As a matter of urgency, the marine scientists say that world governments must:
• Reduce global C02 emissions to limit temperature rise to less than 2oC, or below 450 CO2e. Current targets for carbon emission reductions are insufficient in terms of ensuring coral reef survival and other biological effects of acidification, especially as there is a time lag of several decades between atmospheric CO2 and CO2 dissolved in the ocean. Potential knock-on effects of climate change in the ocean, such as methane release from melting permafrost, and coral dieback, mean the consequences for human and ocean life could be even worse than presently calculated.

• Build a global infrastructure for high seas governance that is fit-for-purpose. Most importantly, secure a new implementing agreement for the conservation and sustainable use of biodiversity in areas beyond national jurisdiction under the auspices of UNCLOS.

Alex Rogers is Professor of Conservation Biology at the Department of Zoology, University of Oxford and a Fellow of Somerville College. He is a marine biologist with special expertise on deep-sea ecosystems, particularly cold-water coral habitats, seamounts and hydrothermal vents and has recently led scientific expeditions to the Indian and Southern Oceans. He also has a special interest in sustainable use of the oceans and human impacts on marine ecosystem. Alex is also Scientific Director of the International Programme on State of the Ocean, an NGO that is specifically analysing current impacts on marine ecosystems globally (see below).

Professor Dan Laffoley, IUCN Vice-chair, World Commission on Protected Areas is a key figure at the global scale on marine conservation, and widely recognized for his leadership on Marine Protected Areas and innovative conservation approaches. For over 25 years he has been involved in leading marine protection efforts at UK, European and global scales creating many of the key initiatives and concepts that underlie our modern approaches to protecting the ocean.

IPSO: The International Programme on the State of the Ocean is a unique consortium of scientists and other Ocean experts, including those from the legal, communications and political arenas, created to identify the current problems affecting the global ocean, project the future outcomes of these problems and develop workable solutions to alter the trajectory of degradation. www.stateoftheocean.org

IUCN: The International Union for Conservation of Nature is a global environmental network with more than 1,000 government and NGO member organizations, and almost 11,000 volunteer scientists in more than 160 countries. www.iucn.org

The Report:
The findings were published in Marine Pollution Bulletin Volume 74 Issue 2 and available at http://www.sciencedirect.com/science/journal/0025326X/74 and also at http://www.stateoftheocean.org