IUU fishing in Cu Lao Cham MPA: how to deal with it?

In April 2017, an IUCN team spent a week on Cu Lao Cham (CLC) in central Vietnam assisting negotiations between the management board and local fishing communities to expand the strictly protected zone of the Marine Protected Area (MPA) from less than 2% to 10% (the globally average is about 25%) in order to enhance fish stock recovery.  The strictly protected zone is so small because when the MPA was established in 2005 that was the largest area that was acceptable to all stakeholders. 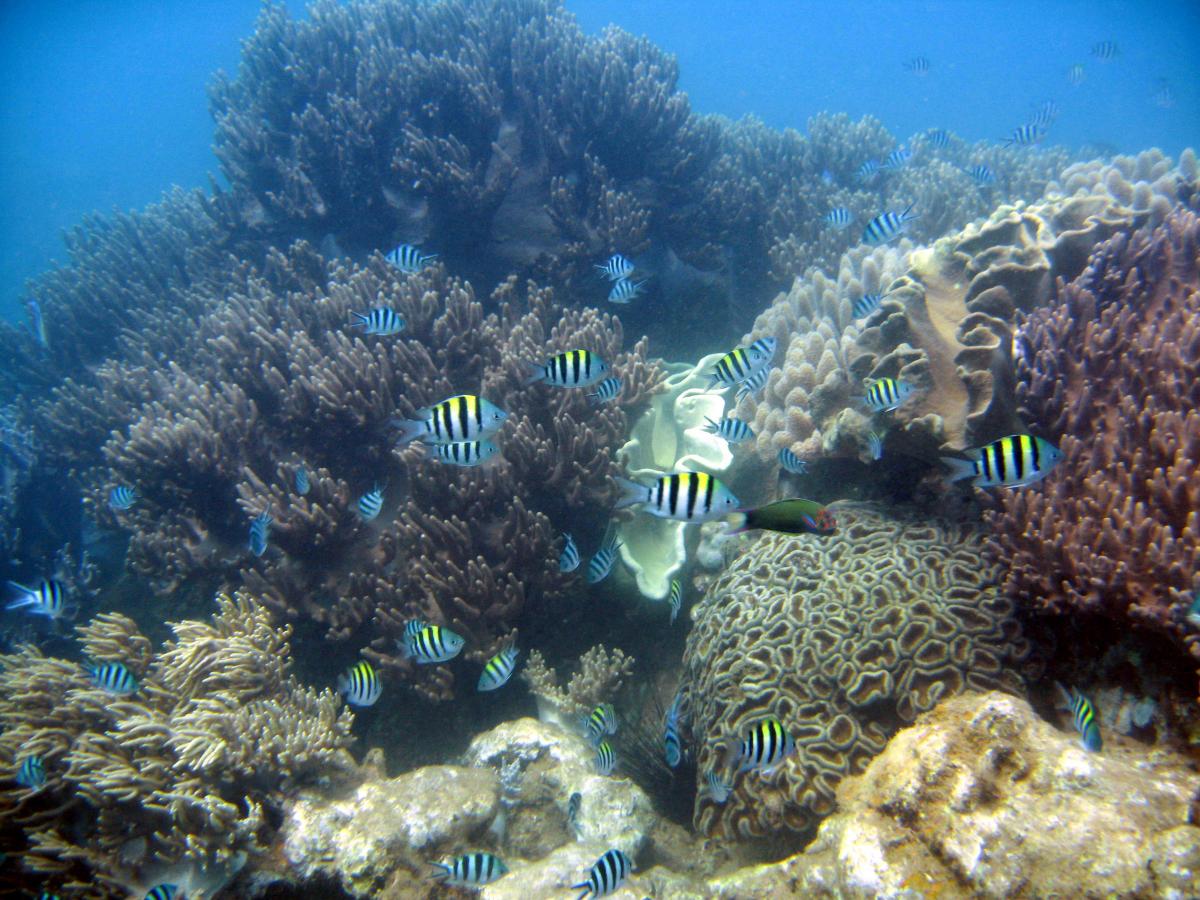 A 20-minute boat ride from Hoi An, CLC has become one of Vietnam’s major tourist attractions, receiving 500,000 visitors in 2017 and 150,000 in the first three months of 2018 alone. Many fishers now earn a living from tourism. 1% of the entrance fees, which in 2017 came to $1 million, are earmarked for community development in Bai Huong, one of the fishing villages we worked with on the southeast of the island. The management board believed the time was right to expand CLC’s strictly protected zone.

Bai Huong, which has formed a sub-MPA co-management group, was happy to cooperate. But the villages of Bai Lang and Bai Ong refused. They fully understood the long-term fisheries benefits of expanding the strictly protected area but they said that would not cooperate until trawlers and spear divers operating illegally inside the MPA were stopped.  Their position was understandable: why should they make a special effort to restrict fishing if the benefits were stolen by outsiders?

In April 2018, IUCN and MARD’s Directorate of Fisheries (DFISH) organized a workshop in Hoi An to discuss possible solutions. This followed the decision by the EU in October 2017 to issue Vietnam a “yellow card”, which is a final warning to the government to take action before all seafood exports to the EU are banned (https://www.ft.com/content/963c4aa8-e6c4-11e7-97e2-916d4fbac0da).  In 2017, these amounted to $1.5 billion, so the economic stakes are high.

DFISH presented steps that the government has taken to ensure that the yellow card is lifted.  The Prime Minister issued Directive 45 “On some urgent tasks, solutions to overcome the warning of European Commission about illegal, unreported, and unregulated (IUU) fishing” in December 2017, and Decision 78, an IUU Action Plan, in January 2018.  The action plan includes much higher fines for boat owners caught fishing illegally, up to 1 billion dong for the most serious offenses.  Provincial leaders are now personally responsible for handling IUU fishing cases and there have been campaigns to publicize the new rules. DFISH is drafting a new MPA decree as part of the updated fisheries law, which will come into effect in January 2019.

But at the workshop, speeches by four experienced CLC fishermen, Xa, Hung, Nam, and Huynh, highlighted the challenges the action plan will face. The profits from IUU fishing are so high that fines have no deterrent effect; they are considered the cost of doing business. Hence the large number of repeat offenders. A reliance on fines also risks moral hazard if generating revenue is seen as more attractive than preventing the offenses in the first place.

The fishermen said that outsiders are driving out local fishers and using increasingly aggressive, inventive, and destructive methods including electric fishing, nets with very small mesh size, and long-lasting fish traps. Even legitimate businesses can break the law with impunity. When local fishers confront boats bringing tourists to dive inside the strictly protected zone, they are told that the businesses have paid their fees to government and can do what they want.  As one fisherman put it, government seems to care more about the rights of outsiders than of locals.

And while tourism has boomed, it is tightly controlled by the Hoi An-based boat companies. Locals benefit relatively little. The fishermen expressed a desire to maintain their traditional livelihoods. They also observed that more tourists mean growing demand for the rarest and most expensive seafood. Once abundant, sea snails and abalone are now rare.

MPA management boards are inherently weak: they can only report IUU fishing; they can’t take action, reflecting the fact that government values MPAs almost exclusively for their tourism rather than their fisheries benefits. In CLC, the management board organizes joint patrols with the coast guard (Bien Phong). But these follow a regular timetable and are easy to evade.  Provided you fish out of office hours, you won’t get caught. As one fisherman said “we aren’t scared”.

The fishermen demanded practical solutions now. In wrapping up the workshop, IUCN argued that while “perfecting the legal framework” is necessary it won’t be sufficient to significantly reduce IUU fishing. What would have a decisive impact is the confiscation of boats (and the fishing gear) caught fishing illegally, a step that would require endorsement from the highest levels of government. The four fishermen eagerly agreed with this suggestion.

The EU’s yellow card is a unique opportunity for Vietnam’s political leaders to make fundamental reforms that move the fisheries sector to a more sustainable footing. Based on the workshop, key steps include: expanding the national MPA network with at least 10% of each MPA strictly protected; ensuring that levels of detection and punishment actually deter IUU fishing; and establishing fisheries co-management in which local fishers are confident that the state will protect them against outsiders. These recommendations aren’t new but given the risk of getting cut off from the lucrative EU market, the time for action is now.