With the support of IUCN-Med, GREPOM-BirdLife Morocco and the Moroccan Department of Waters and Forests, a team of experts from Spain and Morocco has joined forces to tag with GPS and satellite transmitters 12 specimens of Rüppell's vulture (Gyps rueppellii) from the Jbel Moussa Vulture Recovery Centre (CRV) in northern Morocco, near the Strait of Gibraltar. For reasons that are not yet fully understood, this Critically Endangered (CR) African species, which is native to the Sahel, is being recorded more and more frequently far from its breeding areas. Its migratory movements are now reaching North Africa and the Iberian Peninsula. 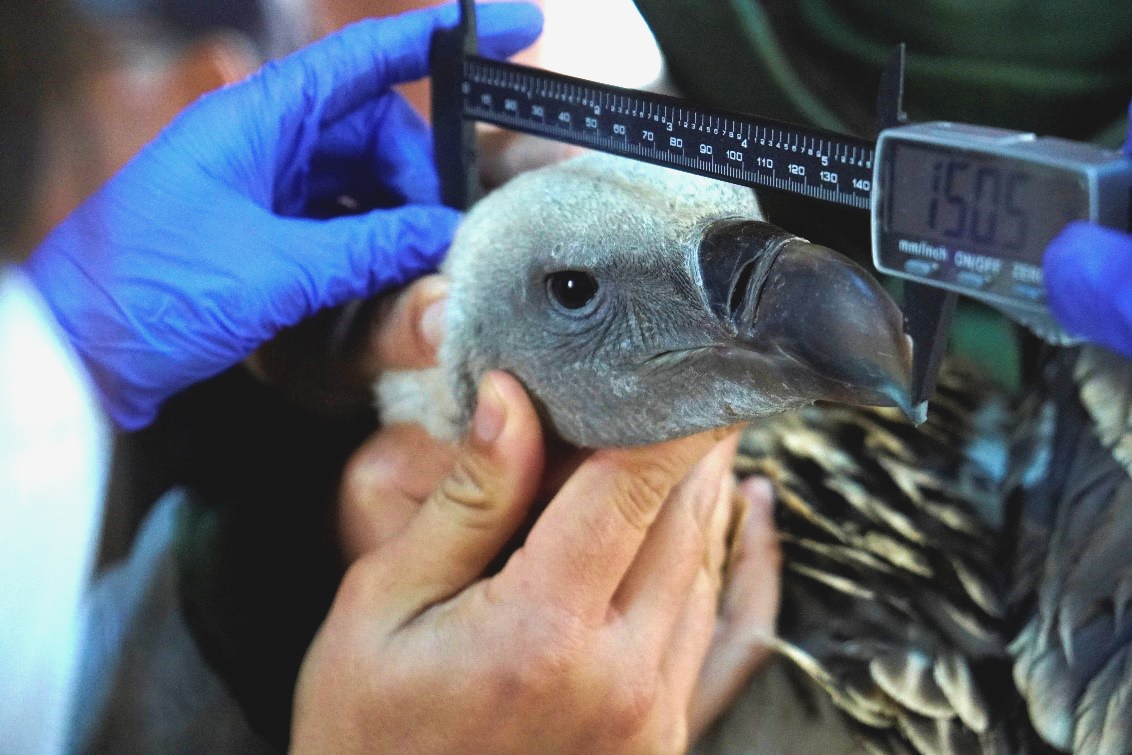 Key actions to improve knowledge on the species and its threats

The fieldwork, which took place last November, was made possible thanks to the voluntary participation and support of experts from GREPOM-BirdLife Morocco and CRV (center created by the Department of Water and Forests and co-managed in partnership with this association), GREFA and the Regional Government of Andalusia (Junta de Andalucía).

The Rüppell’s vultures were been provisionally kept at the CRV until favourable conditions for their return to the wild were given. After a health examination by a veterinarian expert in wildlife from GREFA, the vultures were equipped with transmitters provided by the Junta de Andalucía, the Migres Foundation/ Doñana Biological Station  and the NGOs GREFA and Wilder South.

The birds have now been released at the tagging site, during their autumn migration towards the south, and are expected to join the groups of griffon vultures who they usually migrate with. The data transmitted is expected to provide new information on the behaviour and ecology of this species, as well as the threats it faces and that require greater attention throughout its distribution range.

In recent months, the joint work of various conservation organisations has made it possible to make important progress in the knowledge of the species in the region. Although the Mediterranean is considered to be far from its historical distribution range, the visits of the species to the region are increasing.

The general need to increase monitoring efforts on the entire distribution range of the species through collaboration of experts and organisations was identified as a top priority at the First International Symposium on the Rüppell's vulture in the Mediterranean region (March 2021).

«Interdisciplinary work, collaboration and the exchange of experiences are essential to ensure the success of conservation actions. This initiative is an example of how IUCN and its members work to stop species extinctions." states Maher Mahjoub, Programme coordinator at IUCN-Med.

A species that could be seeking refuge in the Mediterranean

This specific action follows the Recommendations for the development of an action plan for the conservation of the Rüppell's vulture in the western Mediterranean. This African species is in continuous regression throughout its historical distribution range, the Sahel and the regions further south. The population decline in these areas can be linked to climate change, habitat degradation and various other conservation issues. As a result, the species is currently listed as Critically Endangered on the IUCN Red List of Threatened Species.

In recent years the Rüppell's vulture could be finding a new refuge area in the Mediterranean region, as its number of observations in North Africa and in the south of the Iberian Peninsula have been increasing. The causes of this displacement in their migratory flyways could be due to the search for more suitable regions to breed and survive. Nevertheless, more and better data, as well as a greater effort in scientific monitoring are essential in the near future to have a better understanding of the species, its ecology, the causes behind these changes in its behaviour and the threats it faces.

IUCN-Med would like to thank the experts from the partnering institutions for their participation and provision of the material needed to carry out this action, as well as for the logistical support provided by GREPOM-BirdLife Morocco, via its CEPF-Vautours Project.

The initiative is being developed within the framework of the “Safe Flyways - reducing infrastructure-related bird mortality in the Mediterranean” project, in which IUCN-Med is participating, funded by the Mava Foundation.