This concerns an invasive species in the Mediterranean with potential serious economic and ecologic consequences that has already caused damage in other regions such as the United States and the Caribbean. 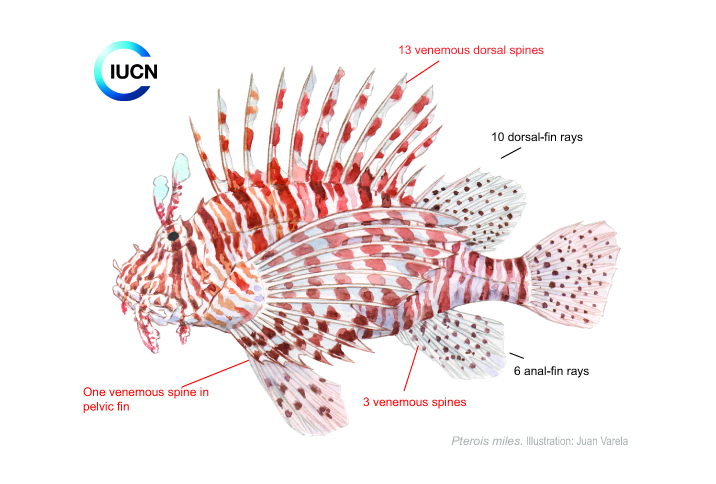 The International Union for the Conservation of Nature (UICN), under the comprehensive MedMIS plan to combat invasive species in Marine Protected Areas (MPAs) of the Mediterranean, has confirmed new sightings in Turkey and Cyprus of a highly potential invasive species: ‘Pterois miles’ also known as the lionfish Devil firefish. Away from the Mediterranean, the species has proved to be an aggressive invasive fish that has expanded in a gradual and spectacular manner on the eastern coasts of the United States and the Caribbean.

The Marine Protected Areas of Kas-Kekova (Turkey) and Cape Greco (Cyprus) have been the locations where sightings have taken place for the lionfish, a species that has already caused serious economic and ecological problems in other parts of the world due to its voracity. The first lionfish specimen sighted in the Mediterranean was in the Bay of Haifa (Israel) in 1991. Ten years later, the species was newly sighted in the northern part of the Lebanon (2012) and in Cyprus (2013), a location confirmed by new findings in Turkey, which also included Iskenderum Bay (Turkey) and in Tunisian waters outside of protected areas.  Dr Carlos Jiménez from ‘The Cyprus Institute’, marine biologist, claims that “this species could have a heavy negative impact on the ecosystems as well as on the local economies”.

Ecologically, the appearance of the lionfish also entails harmful effects to the native marine diversity. It is extremely aggressive and has the capacity to reduce the recruitment of juvenile fish and other species and could occasionally be at the top of the food chain. The ecological impact of the lionfish invasion can also include an increase in the growth of algae as there is a decrease of herviborous fishes, which, according to Dr Jiménez, can “attract the arrival of new invasive species because of the weakening of the local fauna and flora”.

Economically, the appearance of the lionfish can cause a serious impact on the local’s economy. Its presence in other areas has resulted in a reduction on the number of groupers and other commercial species, affecting the economies of the coastal fishing. The lionfish can also have an impact on artisanal fisheries and the nautical or diving tourism as it is highly toxic and its presence could inhibit tourists and divers alike. The lionfish sting should be treated as soon as possible as it can cause allergic reactions. On the other hand, some non-Mediterranean countries have begun to commercialize this fish as edible commercial species, which could be an alternative way, among other measures, to better control the populations.

The recent sightings are part of the comprehensive MedMIS plan, an online information system designed to keep track of invasive alien species in different Marine Protected Areas (MPAs) in the Mediterranean, since they are one of the biggest threats to the biodiversity of this unique ecosystem.

Thus, a large number of exotic fish species, mollusks, crustaceans and jellyfish became established in more than 180 marine protected areas distributed among 19 coastal countries. These exotic species locally threaten to displace the local flora and fauna and could hinder management efforts to maintain or restore their ecological integrity.

The local collaborators of this initiative may report casual sighting through the online platform (www.iucn-medmis.org) and by using the free mobile application for iOS and Android, thereby generating a dynamic map which will provide the exact location of the different species observed in the region and will help expand the information available on their distribution, spread and population density.