Glasgow, United Kingdom, 02 November 2021 (IUCN) – Today at the World Leaders Summit at the United Nations Framework Convention on Climate Change’s 26th Conference of Parties (UNFCCC COP26), a landmark announcement was made by a coalition of governments and stakeholders across public and private finance to commit US$ 1.7 billion over the next four years towards Indigenous Peoples and Local Community (IPLC) led climate solutions. The pledge recognises the proven role IPLCs have in preventing deforestation that is driving climate change. 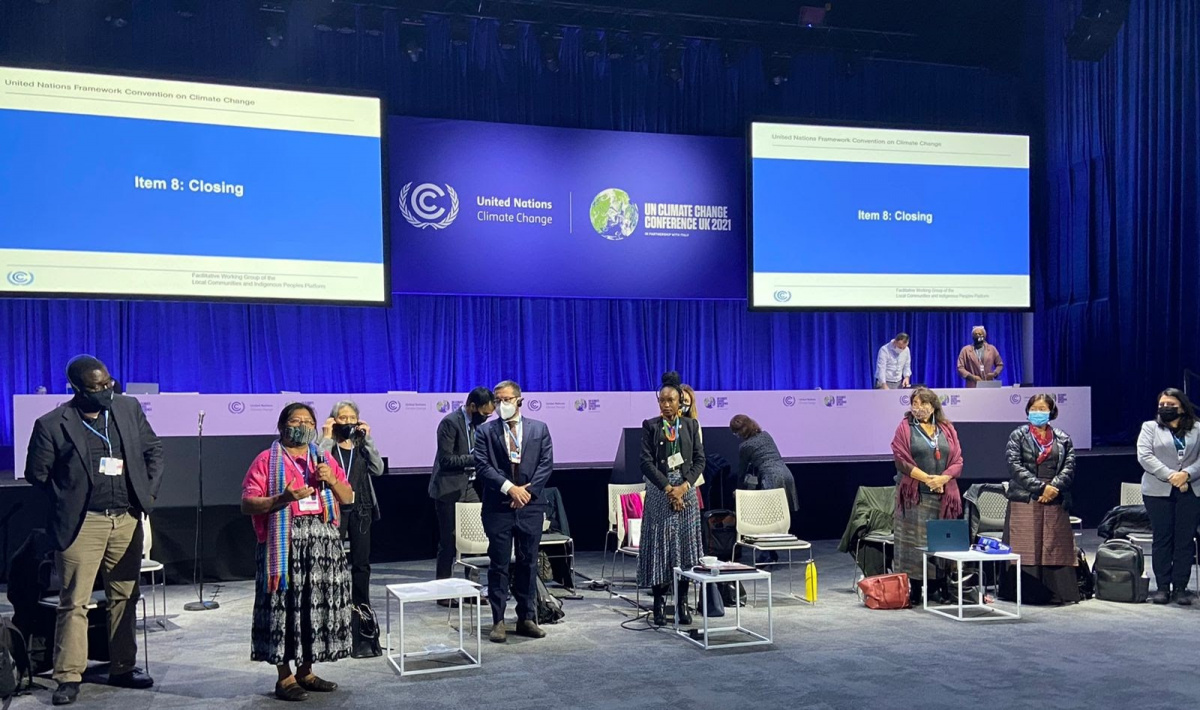 Doña Lola Cabnal from Ak’Tenamit, an IUCN Indigenous People Organisation member, conducts the closing spiritual invocation at the Local Communities and Indigenous Peoples Platform Facilitative Working Group Meeting in preparation for COP26 in Glasgow. Representatives from other IPOs are also on stage, including Hindou Oumarou Ibrahim from the Indigenous Peoples of Africa Committee and Dalee Sambo Dorough from the Inuit Circumpolar Council – among others.

The pledge will support Indigenous and local communities to protect their biodiverse territories and lands from not only climate change, but also biodiversity loss and pandemic risks. In a statement to IUCN, Graciela Coy, Maya Q’eqchi’ leader and President and Legal Representative of Guatemala’s Ak’ Tenamit, an IUCN Indigenous Peoples Organisation member (IPO) welcomed the finance pledge, emphasising that, “As a rural Indigenous woman, I recognise the importance of this commitment to channel resources directly to Indigenous Peoples, which will strengthen our essential work in mitigating the impacts of climate change on our Mother Earth and its inhabitants.” Graciela further underscored that, “Indigenous women suffer the impacts of climate change directly, we know the actions that are needed and we invite the support of this fund to join us in finding real and lasting solutions.” 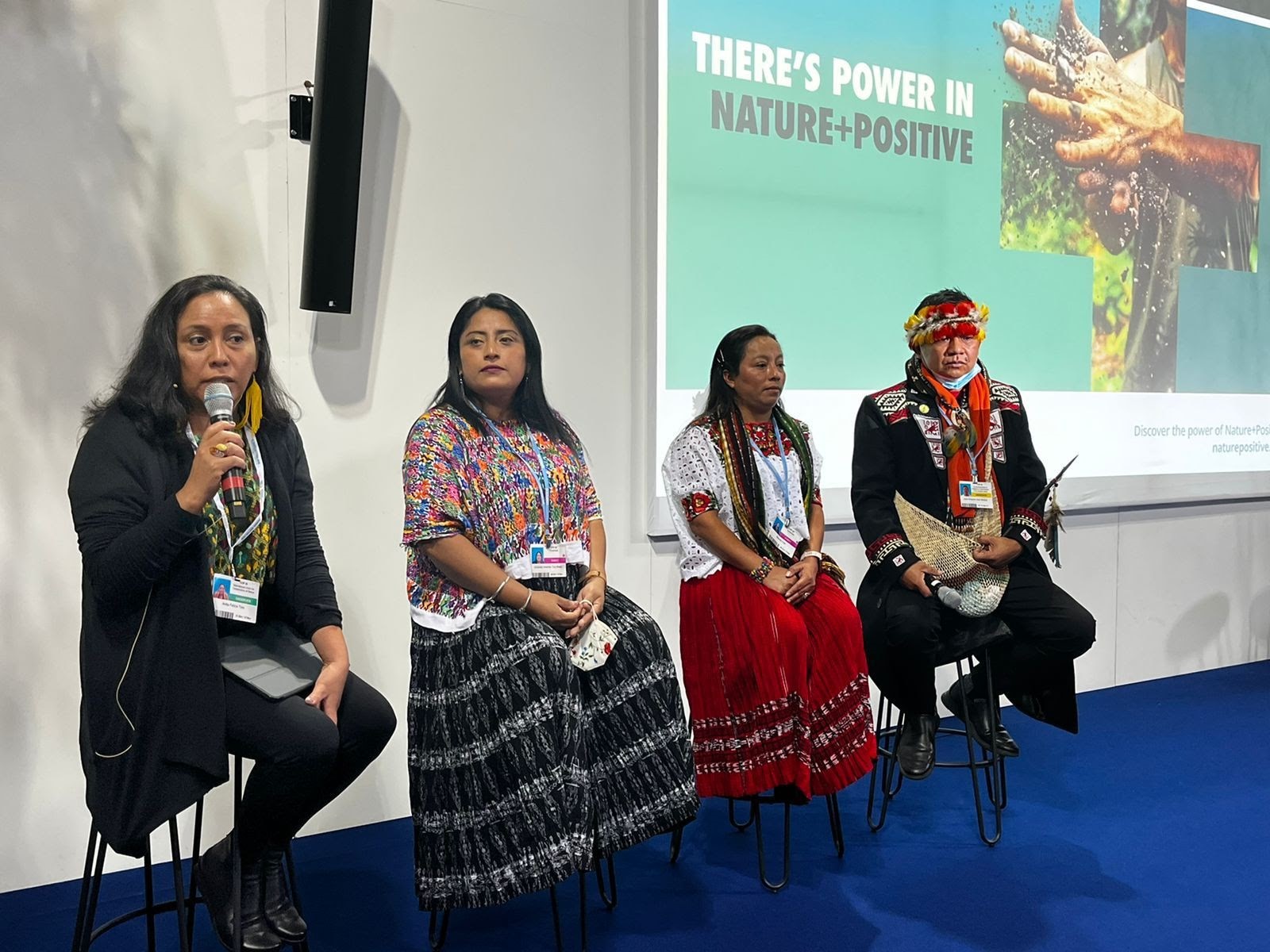 Today’s announcement is an important step forward as recent research shows that though IPLCs conserve and steward large areas of land and forest essential for climate resilience and biodiversity, they have received less than 1% of foreign assistance funds spent for climate mitigation and adaptation over the last 10 years.

Following the lead of Indigenous and local communities

The announcement also complements and strengthens what IUCN has long-held to be true, as recently stated by Dr Bruno Oberle, IUCN Director General: “Our global goals to protect the earth and conserve biodiversity cannot succeed without the leadership, support and partnership of Indigenous Peoples.” IUCN has long worked to include and advance the rights of IPLCs in conservation and climate solutions, including by amending its membership in 2016 to create a dedicated membership category for IPOs, making IUCN the first intergovernmental organisation to recognise and include Indigenous Peoples’ Organisations as a distinct membership constituency.

At the IUCN World Conservation Congress – held in September 2021 in Marseille, France, these Indigenous organisations presented their Global Indigenous Agenda for the Governance of Indigenous Lands, Territories, Waters, Coastal Seas and Natural Resources (English | Spanish) at the first-ever and IPO-led IUCN World Summit of Indigenous Peoples and Nature, which was supported by IUCN’s Global Programme on Governance and Rights together with its  Commission on Environmental, Economic and Social Policy, The Christensen Fund, Nia Tero and the Swedish International Development Cooperation Agency. The Global Indigenous Agenda calls upon the global community to provide concrete support for the realisation of the Agenda, including through increased direct financing. At the Congress, IUCN IPO Members also sponsored and voted on IUCN resolutions, including to protect 80% of the Amazon by 2025 – a call spearheaded by Coordinadora de las Organizaciones Indígenas de la Cuenca Amazónica (COICA).

These milestones also come at a time when direct and inclusive financing is critically important as IUCN briefs and studies demonstrate COVID-19 impacts on community resiliency while scientists have rung bells on unprecedented biodiversity loss and rising temperatures. 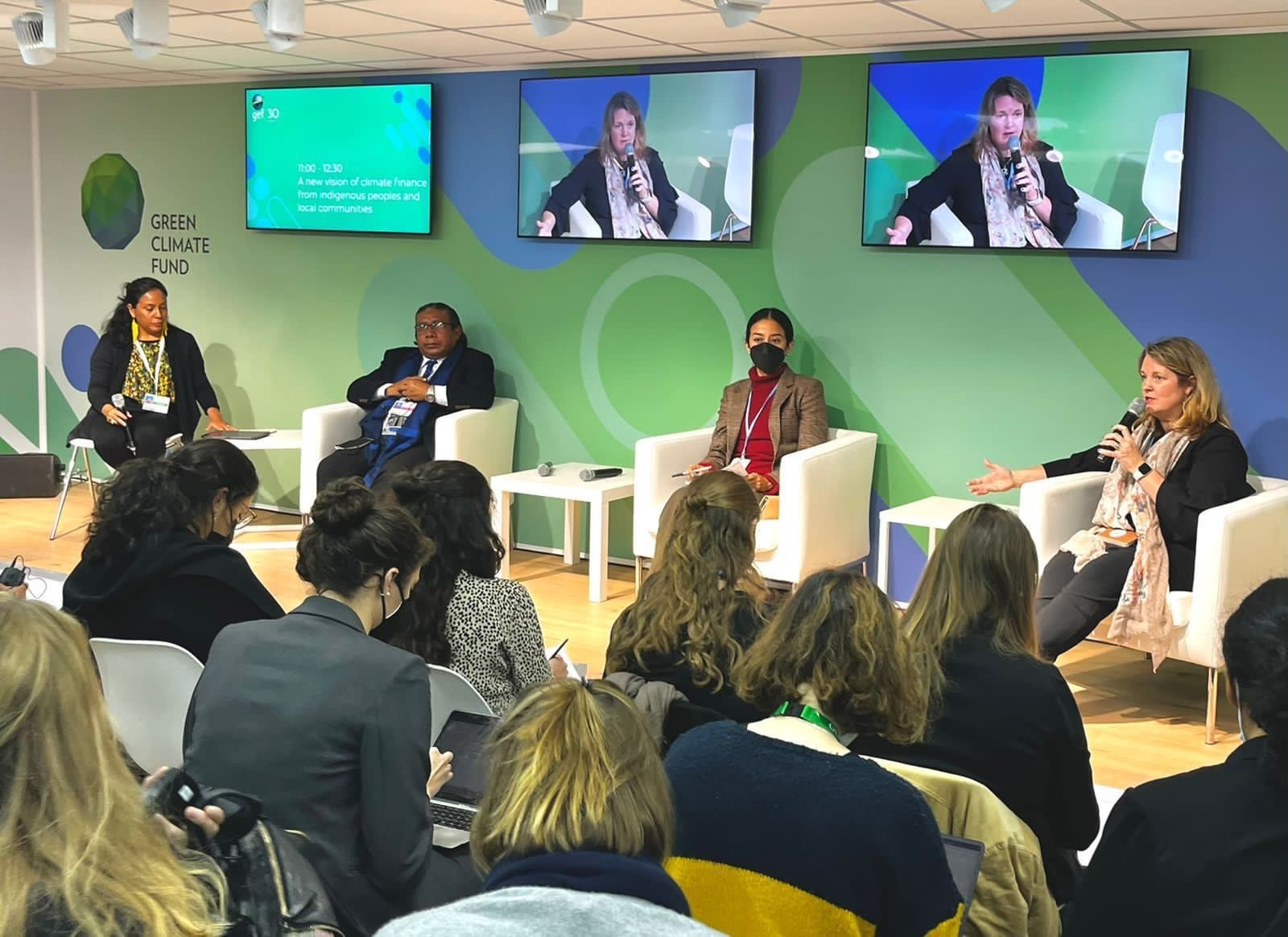 Onel Masardule, Kuna Leader and Executive Director of Fundación para la Promoción del Conocimiento Indígena (FPCI, an IUCN IPO) shared that: “We welcome this important commitment on climate finance directed at Indigenous Peoples, and urge that Indigenous Peoples' rights, interests and priorities are at the heart of it. At IUCN we, the Indigenous Member Organisations of the Union, have a Global Indigenous Agenda which highlights our priorities on nature conservation, biodiversity and climate change and can provide inspiration on the kinds of initiatives Indigenous Peoples are seeking financing for implementation. We know what the solutions are, and we invite support.”

A Union for inclusive conservation action

IUCN is already undertaking work through its Union and partners to place climate and conservation finance and decision-making into the hands of IPLCs, including through partnerships with the Global Environment Facility and the Forest and Farm Facility. David Kamowitz, Manager of the Forest and Farm Facility, shared that, “It is encouraging to see funders respond decisively to the growing evidence that community rights to forests can be a significant cost-effective way to stabilise the climate and protect nature,” with today's announcement also marking “the first time governments and foundations have jointly committed major funding to Indigenous Peoples and local communities’ tenure rights and forest management, and represents a large increase in total funding for those activities.” 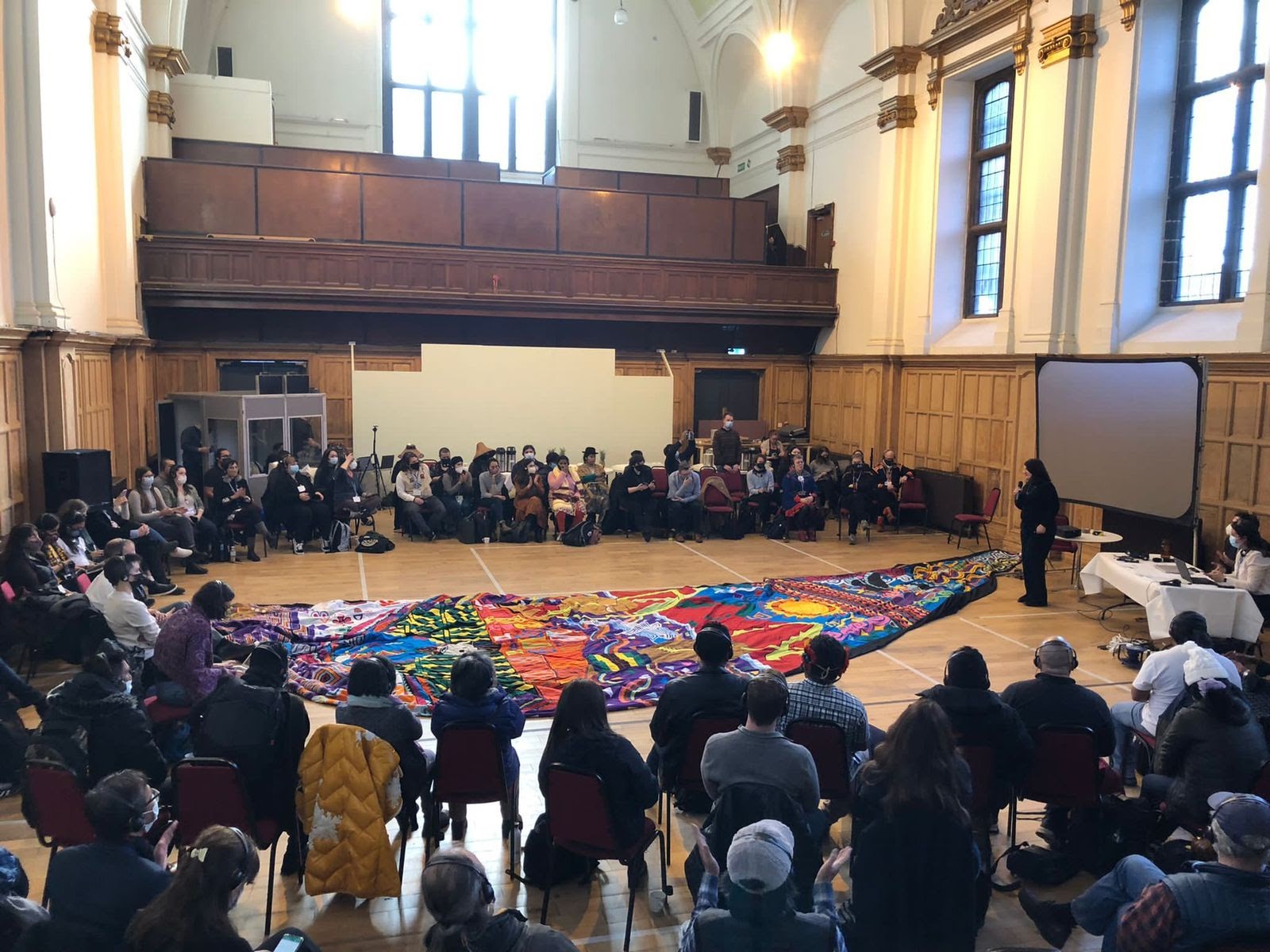 On Saturday 31 October, the Indigenous Peoples Caucus met ahead of this year’s climate COP in Glasgow, with Kuna leaders presenting a Mola made by 50 Panamanian Kuna women.  Photo: Kristen Walker, Conservation International and IUCN CEESP Chair

In the coming months, IUCN will continue its work alongside IPOs to implement and realise its Global Indigenous Agenda. Today’s decision shows that various stakeholders are not only listening, but investing in solutions like these – and more – is needed to continue to build momentum and impact.

As Chris Buss, Director of IUCN’s Centre for Economy and Finance states: "Today's announcement demonstrates that the future of climate finance is transformative and inclusive. More than ever, effective climate action that upholds and advances human rights is imperative for the globe – and investments in Indigenous and local led solutions will lead the way. At IUCN, we rely on our Indigenous Peoples Organisation members to inform and guide our support to their objectives and look forward to working with members to engage with this new financing initiative on the Global Indigenous Agenda to make Indigenous climate and conservation goals a reality for all people and nature."

Dr. Anita Tzec, Maya Yucatec leader from Belize and IUCN’s Programme Officer on Indigenous Peoples and Conservation, concurs, stating: “Together, we can ALL make a difference, and IUCN’s Union will stand alongside its members to answer the call. Change requires a movement – and we are a Union for change."