Nature may have solutions your city is looking for

The world’s cities cover only 3% of the Earth’s land but consume 60-80% of manufactured energy and are responsible for 70% of carbon emissions. However, cities and urban ecosystems have unparalleled potential to conserve biodiversity, preserve surrounding forest ecosystems and maintain health of the urban landscape. Cities can be made capable of reducing their outsized consumption footprints through nature-based solutions. 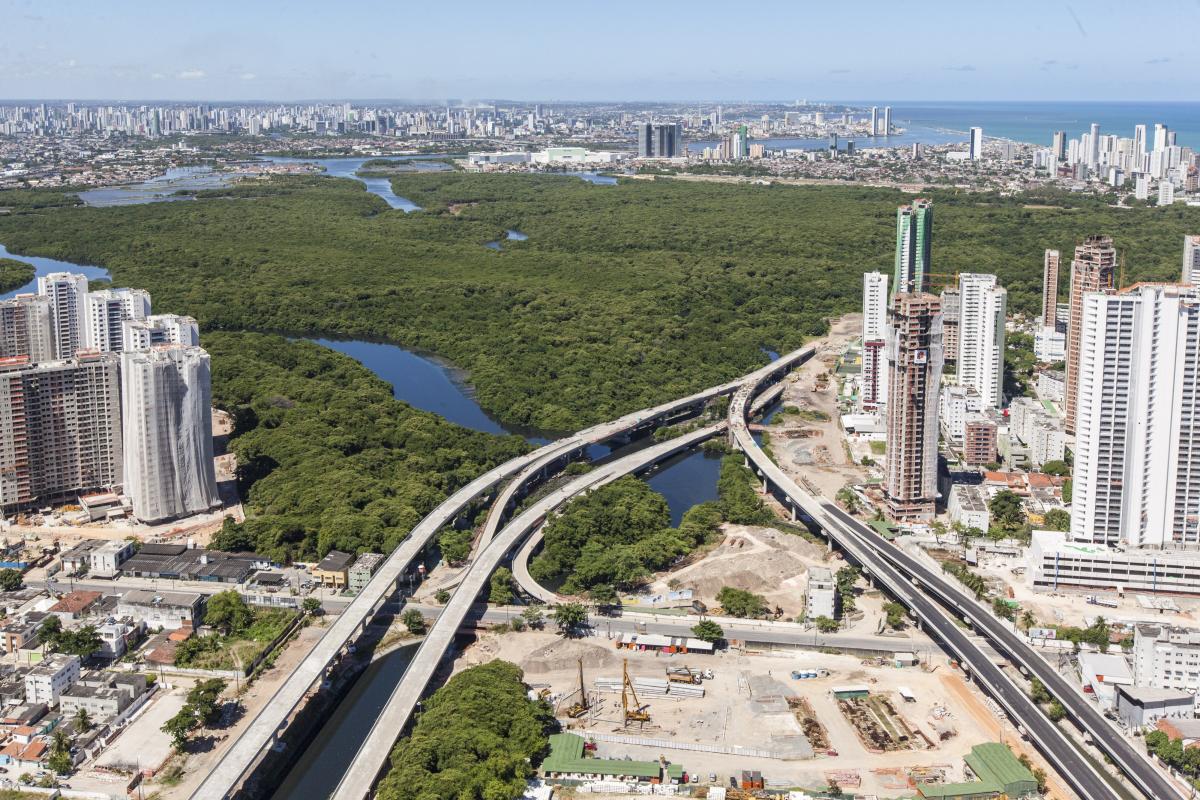 There is no doubt that urban areas are powerhouses of economic growth – contributing about 60% of global GDP. However, they also account for about 70% of global carbon emissions and over 60% of resource use. Key urban biodiversity areas and ecosystems that are experiencing negative trends, as per the Global Assessment Report by the Intergovernmental Science-Policy Platform on Biodiversity and Ecosystem Services, will need to be safeguarded to build sustainable cities that are resilient to climate change. The report makes clear that while the expansion of roads, hydroelectric dams, energy-use, and production and consumption is a significant part of the problem, these remain imperative for economic growth and poverty reduction.

City governments often have to make difficult decisions balancing the economic benefits from infrastructure investments and the environmental costs of these projects. However, in recent years, the negative economic and human impacts of favouring grey infrastructure have become evident. In 2005, Mumbai, the financial capital of India and a rapidly growing urban hub, experienced devastating floods that killed over 1,400 people. Although rainfall levels were higher than anticipated, two factors contributed to the severity of the floods: (1) between 1995-2005 over 40% of the city’s mangroves were cleared for coastal development; and (2) its natural drainage system – the Mithi River – was reclaimed.

The developed world is by no means immune to the devastation caused by natural disasters. In much of the United States, urban flooding is becoming commonplace and is a growing source of significant economic loss, social disruption, and housing inequality. In 2018 alone, urban flooding resulted in over 176,000 insurance claims or flood losses, at a cost of US$ 660 million. According to the National Hurricane Center, Hurricane Harvey, a Category 4 storm that hit Texas in August 2017, caused US$ 125 billion in damage. Within a week, one-third of Houston, the nation’s fourth largest metropolis with 6.6 million residents, was underwater.

What if these and other cities had made slightly different decisions, and chose to ally more closely with nature? Green and blue infrastructure and other nature-based solutions can play an essential role in urban planning – addressing the demands of growing cities while increasing resilience.

Thriving coastal habitats have proven to reduce the risk of coastal hazards such as flooding and erosion during storms. For example, healthy watersheds purify water but also absorb rainwater and reduce the intensity of flash flooding. Mangroves reduce the impact or fully eradicate coastal flooding while providing habitat for biodiversity and have livelihood benefits for local communities.

The benefits of conserving and restoring these vital ecosystems are being increasingly recognised. In the Philippines, mangroves saved the small town of General MacArthur from devastation caused by Super Typhoon Haiyan while the nearby unprotected city of Tacloban was completely devastated. Learning from this experience, the government of the Philippines is investing US$ 8 million in mangrove restoration across the country. Other countries with coastal mangrove resources are following suit with Sri Lanka becoming the first country to pledge to protect all its mangroves, while Pakistan has been restoring its mangroves since the 1990s with over 30,000 hectares conserved to date.

Still, rapid urbanisation continues to threaten this vital resource. The UN estimates that by 2030, urban growth could threaten 29 million hectares of natural habitat that stores an estimated 4.35 billion metric tonnes of CO2.  To make matters worse, as urban areas expand 40% of strictly protected areas are projected to be within 50 km of a city.

The provision of ecosystem services depends on the quality and quantity of urban green infrastructure ­– parks, gardens, urban forests, as well forests and wetlands surrounding urban areas. These areas host rich biodiversity and are essential ecosystems that cannot be disconnected from cities’ sustainability strategies. Nature-based solutions and forest landscape restoration should not replace existing strategies, but rather be implemented in conjunction to make cities more resilient and sustainable. There are invaluable lessons to be learned from cities’ forest restoration projects emerging around the world. The climate action programme in Portland (United States) for example, focuses on increasing urban forest canopy to cover at least 31% of the city. The value of the trees and green spaces are increasingly recognised by urban governments such as: Melbourne (Australia), Philadelphia (United States), Beijing (China), Bangkok (Thailand), Halifax (Canada), Nairobi (Kenya), Lima (Peru), Brussels (Belgium) and Niteroi (Brazil) – where urban forests are managed sustainably and degraded urban areas are restored to enhance ecosystem services.

Nature-based solutions such as forest landscape restoration and ecosystem-based adaptation are smart, climate-resilient solutions that offer a range of benefits to urban societies. Restoring coastal forest ecosystems compliments conventional engineering approaches to coastal cities and is more cost-effective in enhancing resilience to natural disasters. Increasing tree cover and enhanced management of urban forests protects public health from air pollutants and saves energy by reducing urban heat. For example, the US Environmental Protection Agency has found that green roof temperatures can be 30–40°F (16-22°C) lower than those of conventional roofs and can reduce city-wide ambient temperatures by as much as 5°F (2.8°C). Vertical greenery plays a critical role in providing habitat for birds and cooling buildings, thereby reducing dependency on fossil fuel-intensive cooling systems and increasing recreational space. Urban tree cover captures rainwater and protects against inner city flooding. Restoring slope areas also protects cities from landslides. Surrounding forested landscapes can generate cost savings in water treatment and provide clean water supply to cities.  For example, the city of Seattle (United States) gets its water from the Cedar and Tolt rivers that rely on the surrounding forests for water quality.

The role of cities in conserving biodiversity is twofold. First, city residents can have direct positive impact on many plants and animals through their own actions. They can contribute to the protection and recovery of threatened birds and insects by planting native flowers and fruit species in their back yards. An additional benefit to this approach is the creation of urban food systems that, by their very nature, are less carbon intensive and use less water and pesticides than traditional agriculture. The second layer to the biodiversity discussion is the role cities can play in species’ conservation. The Sanjay Gandhi National Park, located within Mumbai city limits, is home to more butterfly species than the entire United Kingdom. The park also supports a thriving population of leopards and most recently, acted as a corridor for a tiger. While the onus here falls on wildlife management authorities, nature-based solutions such as forest landscape restoration can play a critical role in (1) creating or improving connectivity between city forests and larger protected areas, and (2) reducing pressure on these last remaining natural strongholds.

In addition, urban forests and surrounding forested landscapes are cost-effective pathways to mitigate and combat climate change. Investing in conservation and restoration of cities’ ecosystems is not only ecologically desirable but also economically viable.

Cities have already started to take action toward greener and resilient urban landscapes. During the Global Climate Action Summit in California in 2018, 45 cities joined the global Cities4Forests initiative to conserve and restore forests within and outside city boundaries. A non-profit organisation pioneered by the Rockefeller Foundation called 100 Resilient Cities is supporting cities to become more resilient to physical, social and economic challenges through nature-based solutions. Under the C40 Cities umbrella, a network of mayors of some of the world’s megacities have committed to bold climate actions. And on a national level, in June 2019, the UK launched The Future Parks initiative – a first of its kind multimillion pound project to secure urban parks and green spaces totaling over 20,000 hectares in eight urban areas.

IUCN recognises that urban areas are disproportionately affected by the impacts of environmental change and recognises the role that nature plays in helping city-dwellers be resilient to the worst impacts of climate change, while enabling residents of cities to lead healthy lives. In 2018, IUCN launched the IUCN Urban Nature Alliance to bring together a diverse group of experts to raise awareness of the value of ecosystems in urban areas, and how these ecosystems can help address urban challenges. 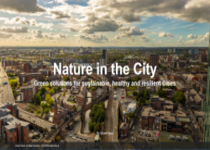 The Annual Global Forum on Urban Resilience and Adaptation recently held in Bonn, Germany provided an opportunity for open dialogue among governments, practitioners, businesses and civil society to share knowledge and expertise for the advancement of urban resilience. Nature-based solutions and restoration was at the heart of discussions to tailor solutions that are sensitive to social, economic and ecological contexts, addressing challenges like food security, climate change, water security, disaster risk, and social and economic development. Integrated city-specific and landscape-level planning can be invaluable in conserving and restoring biodiversity and ecosystem functions and services.

Forests are shaping the future of urban resilience. Urban planners can integrate nature-based solutions and forest landscape restoration strategies into the design and planning of an innovative and inclusive urban nature agenda, particularly by:

The challenges cities face can be overcome in ways that allow them to continue to thrive and grow, while improving resource use and reducing pollution and poverty. The future we want includes cities of opportunities for all, with access to basic services, energy, housing, transportation and more. – UN on Sustainable Development Goal 11

At next year’s IUCN World Conservation Congress, states, NGOs, the private sector and others from around the world will come together to reflect on current strategies and discuss nature-based solutions to  the challenges we face. IUCN and its hundreds of member states and organisations will build from these challenges and explore real-world opportunities to address biodiversity, climate change and other environmental stressors at all levels.

The World Conservation Congress is an excellent opportunity to come together to seek and advocate for urban-centric nature-based solutions such as forest landscape restoration and ecosystem-based adaptation, and promote evidence-based best practices for wider adoption. Join IUCN and the global conservation community in Marseilles, France in June 2020 to create momentum for stronger collaboration at the global, national and local levels and share your stories and best practices that will inspire action to achieve inclusive, safe, resilient and sustainable cities.