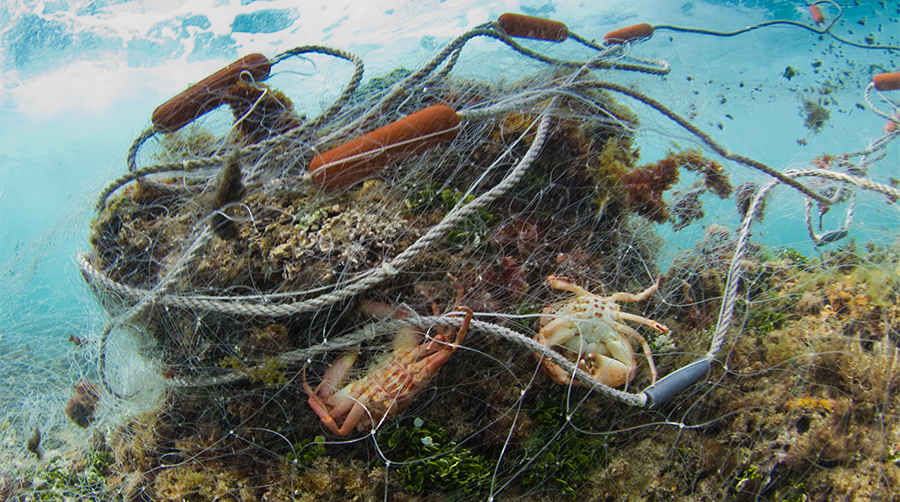 IUCN Commission on Ecosystem Management is conducting a study to estimate annual rates and levels of derelict fishing gear that is inputted into global seas annually.

The amount of marine litter has been substantially increasing over recent decades. Most marine debris is now made of synthetic plastics, some readily visible, some microscopic. The United Nations Sustainable Development Goal 14.1 aims to, “by 2025, prevent and significantly reduce marine pollution of all kinds, particularly from land-based activities, including marine debris and nutrient pollution”. Most debris is from land-based sources, but at a local-scale, sources of marine debris are highly variable. Currents and wind can move floating debris long distances, in some locations accumulating into large garbage patches. Some floating debris washes ashore or sinks. Many plastics are persistent, and take hundreds of years to degrade at sea, and may be largely impervious to degradation once it sinks to the seafloor. Marine debris causes a variety of ecological and socioeconomic problems, including obstructing navigation, altering and damaging habitat, transporting and spreading species, transferring toxins into marine food webs, causing injury and mortality when ingested by marine life, and causing ghost fishing.

There is relatively limited information available on levels of marine debris, including from abandoned, lost and discarded gear (ALDFG), also called derelict fishing gear. The Food and Agriculture Organization of the United Nations made a back of the envelope estimate in 2009 that 6.4 million tonnes of marine debris are inputted to global seas annually, mainly from land-based sources, and that ALDFG composed less than 10% of this total by volume at a global scale. The amount, distribution and effects of ALDFG very likely have risen, substantially, over past decades with the rapid expansion of fishing effort and fishing grounds, and the transition to synthetic, more durable and more buoyant materials used for fishing gears. However, no robust estimates have been made of the amount of ALDFG that is inputted to global seas annually – there is no benchmark against which to assess the efficacy of initiatives to curb this component of marine debris. This study will contribute to addressing the gap in knowledge of the amount of derelict gear that is produced annually, by gear type and region.

Using data compiled from a literature review, public domain data held by regional fishery bodies, observer program data, and a survey of fisheries observers and other experts, we will conduct a global meta-analysis to estimate:

The expert survey will fill gaps in information on rates of producing derelict gear for priority gear types and regions for which no available estimates are currently available. We will survey at-sea observers and analysts of fisheries electronic monitoring data, fleet managers and other stakeholders, on rates that commercial marine fishing vessels produce derelict gear. Detailed estimates of rates of abandonment, loss and discarding of individual gear components will be compiled, a level of detail typically not collected in fisheries observer programs. Gear-specific survey forms will be available in several languages. Nonresponse will be assessed using individual-specific covariates to determine if the nonresponse group differ in characteristics from the response group. Nonresponse bias will be estimated using multilevel (hierarchical) logistic regression modelling in a Bayesian framework. We will also compare estimates from the survey with estimates from published studies for the same fisheries in a meta-analysis framework that accounts for the precision of those estimates. The current survey estimates will then be formally compared to the weighted meta-analysis estimate of all studies.

“Please assist with the project by asking relevant experts to complete a survey by August 1, 2019. The survey form, which is available in 20 language versions, is available from this website - https://tinyurl.com/survey-forms-derelict-gear - for the following gear types: gillnet, pelagic longline, pot and trap, small pelagics purse seine, tuna purse seine, bottom otter trawl, handline, troll, and squid jigging.”

For more information, and to assist with the expert survey email FisheriesResearchGroup@gmail.com