In Shyamnagar, Bangladesh, approximately 17,000 hectares of land (nearly the area of Washington D.C.) are being used for shrimp cultivation. 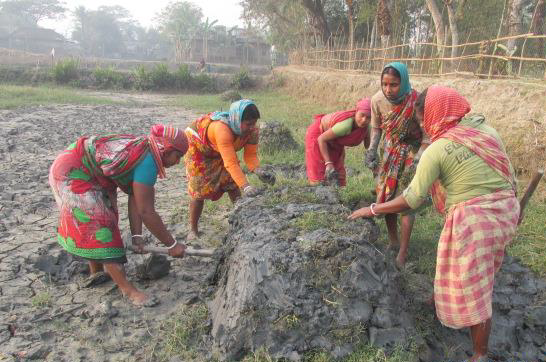 Most farmers in Shyamnagar cultivate shrimp using toxic fertilisers and pesticides from local shops, damaging the region’s soil, groundwater and local ecosystems. This leads to mangrove degradation, sedimentation, saltwater intrusion and disease outbreaks, which then have severe socioeconomic impacts such as loss of land and food security, marginalisation, rural unemployment, loss of traditional livelihoods and the resulting social unrest.

“I didn’t know that my farming methods were bad and harmful to the environment. All I knew was that the only way I could earn a living was by using these techniques that nearly everyone else was also using,” said Abdus Sattar, a farmer from Shyamnagar who has been cultivating shrimp nearly all his life.

To motivate farmers to adopt environmentally sustainable practices, non-governmental organisation (NGO) Shushilan and Mostafa Organic Shrimp Products Ltd. (MOSPL), a local business, partnered with MFF to initiate the ‘Road to resilience of Shyamnagar’ project. The project trained farmers in integrated mangrove shrimp-farming methods, which provided higher economic returns compared to farms in areas where mangroves had been cleared. The higher economic value of shrimp, produced using organic methods based on criteria set by the Naturland Association for Organic Agriculture (Naturland), would serve as a financial incentive to reverse the environmentally harmful trends and, in the process, contribute to building the resilience of coastal communities.

Naturland criteria for organic aquaculture include the location and size of shrimp ponds, the presence of an improved water management system, vegetation cover, breeding and hatching practices, humane transport and slaughter, post-harvest handling, market analysis, etc., as well as the elimination of child and involuntary labour, gender inequality, and all type of sexual harassment on the farms.

As part of the project, Shushilan trained 100 farmers in mangrove plantation and husbandry, mangrove aquaculture, water management, marketing, and value addition techniques such as sorting shrimp by size, keeping them on ice, and avoiding chemical fertilisers. The NGO also developed a mangrove-based shrimp farming guideline to build farmers’ capacity to become certified organic, and brought mangrove seedlings to the community through the Bangladesh Forest Department and local nurseries. MOSPL and Naturland coordinated the process to document the farmers’ progress, and MOSPL collected what the farms produced. 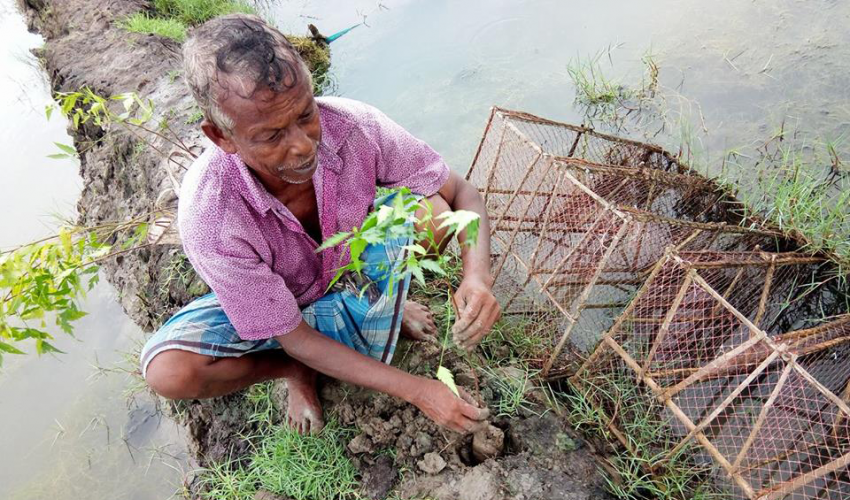 Sattar was one of the farmers who participated in the project, and worked towards preparing his farm for organic shrimp production by planting various species of mangroves around shrimp ponds.  The farmers also fenced off the farm dykes to protect the area from cattle and other livestock, as per Naturland specifications, and monitored and recorded the steps they took to making and maintaining the suitability of their ponds for organic cultivation.

“After receiving the certificate and farming organic shrimp, my earnings are much higher than before,” says Sattar, whose income has risen from TK 32,760 (US$ 390) to TK 39,450 (US$ 469) in the past year. “I only have to work one job to provide my family with three meals a day, and I can send both my daughter and son to school, instead of just my son. I’m also happy to know that I am helping to protect the land from natural disasters like Sidr and Aila,” he adds, referring to the cyclones that caused devastation in Bangladesh in 2007 and 2009.

Approximately half of the 100 farmers that were trained by the project, including Sattar, had already recognised the financial benefits of selling organic shrimp and had begun working toward organic cultivation before Shushilan offered their support; Shushilan encouraged more systematic efforts towards the goal of certification, building on what had already been achieved and streamlining the rest of the process. The other half of the project’s trainees, who started from scratch, have yet to achieve certification; Shushilan has been working with these farmers to reach the minimum 25% vegetation coverage required for certification, so they can become certified during Naturland’s next visit at the end of this year and benefit from the premium prices of certified organic shrimp.

Moving forward, Shushilan and MOSPL plan to expand organic shrimp cultivation to more farmers in Shyamnagar. They also hope for further innovation in organic farming procedures, as this will lead to improved livelihoods for the shrimp farmers, as well as enhanced resilience to natural disasters for the region’s communities.