Blog: How do young biologists dream the future of conservation in Bangladesh? 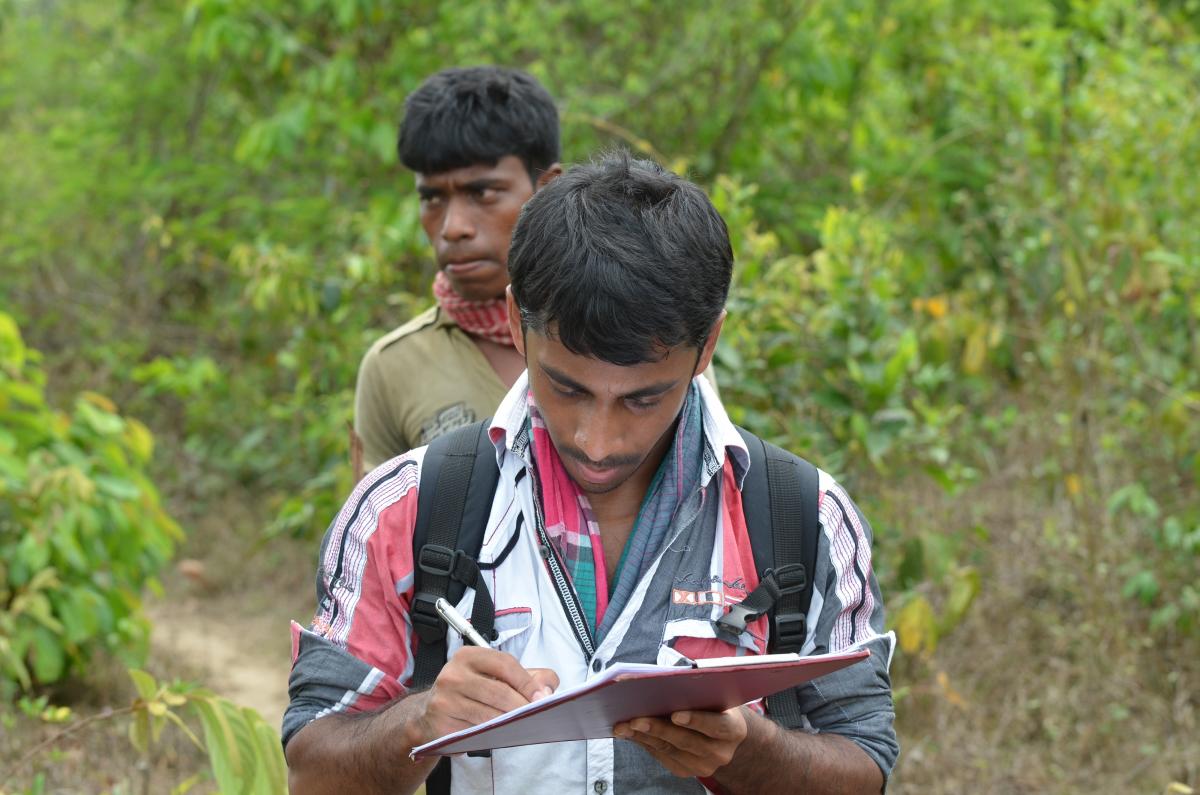 A volunteer engaged in a status survey of Asian elephants in Bangladesh.

Over the past three months, I have been listening to mid-level to senior officials from government departments, academics from universities, and representatives from civil society at a series of workshops held all over Bangladesh. These workshops were organised to share knowledge and seek opinions so as to validate and finalize the national the National Conservation Strategy (NCS) for Bangladesh. In these events, participants often brought up conservation challenges the country was facing.

About a year ago, on a completely unrelated occasion, 27 young Bangladeshi biologists took part in a training on IUCN Red List assessment. I took that opportunity to ask these scientists three questions to understand their views on wildlife conservation in Bangladesh.  Taking a break from the NCS rush, I decided to go back to what those young biologists − most of which have a Master’s degree and are of an average age of 26 years old − wrote me last year, only to be amazed, one more time.

Challenges and opportunities through young eyes

My first question to them was, ‘What are the three biggest challenges of wildlife conservation in Bangladesh?’

Inadequate or lack of awareness from the general mass as well as concerned authorities topped the list. It was followed by inadequate funding for wildlife conservation and research, and destruction, degradation and deterioration of wildlife habitats.

Besides these clear leads, the young biologists identified another 20 odd challenges,  including the pressure of over-population on natural ecosystems and over-exploitation of wildlife by the people. The respondents also listed climate change, and natural disasters, including wildlife diseases, as natural challenges.

Challenges associated with wildlife research included limited opportunity to do field work; limited collaborative work; and mind set of the people working in the conservation sector. The last two were further elaborated by one respondent highlighting tension among researchers and organizations, and quoting “[Some] people are likely to give priority [to themselves] than the wildlife.”

My second question was ‘What are the three most exciting opportunities for wildlife conservation in Bangladesh?’

Once again expressing their personal views, about half of the respondents identified research opportunities as the top most opportunity in Bangladesh. They said so since the country still had many unexplored areas − both geographically and scientifically speaking. More than one-third of the respondents saw increasing employment opportunity in the conservation field had created scope for young biologists to join wildlife protection. Almost the same proportion of respondents also noted an increase in conservation initiatives by the government and the non-government organizations in recent years.

Despite its small area, Bangladesh does have diverse ecological settings: Forests, aquatic habitats, the coastal and marine ecosystems, and of course the unique Sundarban. Therefore, conserving these natural ecosystems, by declaring more protected areas, and by stopping destruction and obstructions, is a great opportunity for Bangladesh.

From an economic point of view, wildlife conservation can benefit through employment generation, trading, and ecotourism. Conserving marine and coastal biodiversity has implication in taking ‘blue economy’ forward, as one respondent pointed out.

Proper implementation of existing laws to protect animals and habitats is an integral part of conservation governance. To do so, there is a great opportunity to create sufficient and skilled manpower within the government. Above actions could eventually create opportunities for Bangladesh to make its environment better and balanced.

In the final question, I asked the respondents ‘If they were in the year 2030, what three fantastic achievements they would expect to see in wildlife conservation in Bangladesh.’

Most of the youths dreamt of a Bangladesh where the people, the government and all concerned stakeholders were aware, concerned and enthusiastic about wildlife and its conservation. It is a straight forward expectation, but very important given the prevailing challenges.

Keeping species conservation in mind, the young respondents pictured a country where all threatened species would be out of IUCN threatened categories. In 2030, they wanted to see all the species that they could see in 2016 − that is, no more extinction. This brought their expectation about ecosystems. Every district has at least one forest; more than 25% of Bangladesh has forests; and all species roaming in their own healthy habitats in sufficient numbers – were a few dreams of the respondents. They also anticipated declaration and proper long-term management of many new protected areas, often focusing on umbrella species.

Dreaming about wildlife research in 2030, the respondents hoped that universities and research institutions would create many excellent wildlife researchers. Quality research outcomes would directly contribute to wildlife conservation. To create such a research-friendly environment, funding is crucial. It was hoped that the government and national and international organizations would fund conservation more than ever and engage researchers to play their due roles. Several respondents envisaged that distribution of research funds would be fair to all wildlife groups. Another aspect of research is knowledge management. The respondents repeatedly pointed out creation of complete database on species and ecosystems. A respondent expected “a [mobile] app that can identify and give important and interesting information immediately [just by uploading] photos”, making best use of ICT and mobile phone technology.

Finally, most of the young respondents wanted stronger, proper, inclusive, and accountable conservation efforts by 2030. They expected more political will for conservation; stronger implementation of laws; and “everybody [would] do their job perfectly and with their best level of dedication”. By the next 15 years, they hoped that the new generation, who were already very much interested in wildlife, would lead the conservation effort and would manage biodiversity in a better way. They envisaged “Bangladesh [becoming] a role model of wildlife conservation.”

In 2010, the world leaders agreed on 20 Aichi Biodiversity Targets under the Convention on Biological Diversity (CBD). These targets are expected to be achieved by 2020 to improve the grim condition of global biodiversity. Six years on, a recent report on Asia and the Pacific has shown this region’s struggle to achieve those Targets. Progress of specific countries, like Bangladesh, is not much different from the regional or similar global assessments.

The conservation challenges shared by the young Bangladeshi biologists are well-known and often in-built within country’s political and governance systems. The NCS workshops have also highlighted many of those. Despite that, the youth showed tremendous positiveness while describing the conservation opportunities and, more importantly, their dreams. They hoped for fairness, accountability and inclusiveness in different areas of conservation. They emphasised importance of research and knowledge creation to take wildlife conservation forward in Bangladesh. They were enthusiastic and passionate, but at the same time realistic. Although these young minds cannot always join in, we should always appreciate their optimism in national conservation discourses.