Six out of the world’s eight species of bears are threatened with extinction, according to recent assessments by the IUCN Bear and Polar Bear Specialist Groups. Asia and South America are revealed as the areas most in need of urgent conservation action 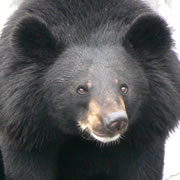 The world’s smallest species of bear, the sun bear (Helarctos malayanus), has been classed as Vulnerable, while the giant panda (Ailuropoda melanoleuca) remains in the Endangered category on the IUCN Red List of Threatened Species.

The sun bear’s new status has been accepted for inclusion in the 2007 IUCN Red List. The sun bear lives in mainland Southeast Asia, Sumatra and Borneo and was previously listed as Data Deficient, meaning that not enough was known about the species to give it a status on the IUCN Red List.

Rob Steinmetz, co-chair of the IUCN Bear Specialist Group’s sun bear expert team, said: “Although we still have lot to learn about the biology and ecology of this species, we are quite certain that it is in trouble. We estimate that sun bears have declined by at least 30% over the past 30 years (three bear generations), and continue to decline at this rate.

“Deforestation has reduced both the area and quality of their habitat. Where habitat is now protected, commercial poaching remains a significant threat. We are working with governments, protected area managers, conservation groups and local people to prevent extinctions of the many small, isolated sun bear populations that remain in many parts of Southeast Asia.”

The only bear presently considered Endangered is the giant panda. That status remains unchanged despite enormous efforts in China directed towards its conservation, including the establishment of nearly 60 panda reserves, a ban on logging, and widespread reforestation programmes.

Dave Garshelis, co-chair of the IUCN Bear Specialist Group, said: “Quite a bit is now known about the ecology of giant pandas and substantial work and expense has been aimed at trying to estimate total numbers of these animals. However, these estimates are imprecise and prone to significant error.

“Even though some people have claimed that panda populations are on the rise, we still consider them Endangered because too much uncertainty exists to justify changing their status to Vulnerable. It would be unwise to assume that in less than 10 years under the new habitat improvement policies in China that panda populations could have dramatically increased.”

Although hunting bears is illegal throughout Southern Asia, bears suffer heavy losses from poachers, who risk the small chance of being caught against lucrative gains from selling parts.  Bile from the bear’s gall bladder is used in traditional Chinese medicine and their paws are consumed as a delicacy. Additionally, bears are often killed when they prey on livestock or raid agricultural crops. Bears simply roaming near a village may be killed because they are perceived as a threat to human safety.

Dave Garshelis said: “Although we do not have any reliable population estimates for the sun bear, or any of the other Asian bears for that matter, we fear that bears in Southeast Asia are declining at a particularly rapid rate due to extensive loss of forest habitat combined with rampant poaching.”

The Bear Specialist Group concluded a meeting in Monterrey, Mexico, on November 10 and has updated the status of the seven species of terrestrial bears.

Sloth bears live on the Indian subcontinent, where habitat loss has been severe. They have found sanctuary mainly in reserves set up to protect tigers. The IUCN Bear Specialist Group indicated that this species might have disappeared entirely from Bangladesh during the past decade.

In 2006, the polar bear was listed as Vulnerable on the IUCN Red List. Technically a marine mammal, the polar bear is distinct from the other seven terrestrial bears and has a different specialist group.

Bruce McLellan, co-chair of the IUCN Bear Specialist Group, said: “An enormous amount of effort and funding for conservation and management continue to be directed at bears in North America where their status is relatively favorable. It is unfortunate that so little is directed at bears in Asia and South America where the need is extreme. We are trying to change this situation but success is slow.”

For more information or to set up an interview, please contact:

Photos available on request from sarah.halls@iucn.org

About the IUCN Species Survival Commission (SSC) and Species Programme

The Species Survival Commission (SSC) is the largest of IUCN’s six volunteer commissions with a global membership of 7,000 experts. SSC advises IUCN and its members on the wide range of technical and scientific aspects of species conservation and is dedicated to securing a future for biodiversity. SSC has significant input into the international agreements dealing with biodiversity conservation. Web