Reuters Foundation and IUCN, the International Union for Conservation of Nature announce today the regional winners of the 2008 Reuters-IUCN Media Awards for Excellence in Environmental Reporting, who will vie for the global prize of US$5,000. 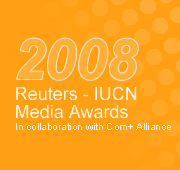 The regional winners have been selected from some 350 print entries from all five continents.

This year’s regional winners competing for the global prize are:

English-speaking Africa and the Middle East: Ochieng’ Ogodo for IslamOnline vividly illustrates the “Hidden Costs of Valentine’s Day”. More than 50 flower farms around Lake Naivasha in Kenya are polluting and reducing the lake water to the extent that it could disappear within 10-15 years.

Europe: Philip Bethge, Rafaela von Bredow and Christian Schwägerl for Germany’s Spiegel magazine depict the current revolution in conservation: the discovery of nature as a marketplace. Meticulously researched, the article shows how pricetags are being put on corals, rainforests and rare plants for producing food, CO2 sinks and drugs. Our planet may be saved, because “destroying nature will no longer be profitable while protecting it will.”

Francophone Africa: Ramata Soré for the magazine “L’Evénement” portrays how the pilot farm of Guié located in the Sahel in Burkina Faso is successfully turning desert-like landscapes into flourishing farmland. This model is now spreading throughout the country in the fight against desertification and to enhance development.

North America, Oceania & the Caribbean: Noémi Mercier for Québec Science reveals the toxic story behind e-waste recycling. Exported to India for their supposedly eco-friendly recycling, computers are dismantled under the poorest conditions, poisoning thousands of people and the environment.

At the global awards ceremony, co-hosted by Reuters, IUCN and Com+ Alliance of Communicators for Sustainable Development, on 7 October 2008, the six regional winners will receive a trophy in recognition of their excellence in environmental journalism and the global winner will be announced.

The Awards, established in 1998 by Reuters Foundation and IUCN, aim to help raise global awareness of environmental and sustainable development issues, by encouraging high standards in environmental reporting worldwide. The next Reuters-IUCN Environmental Media Awards will take place in 2010.

About IUCN
IUCN, the International Union for Conservation of Nature, helps the world find pragmatic solutions to our most pressing environment and development challenges by supporting scientific research; managing field projects all over the world; and bringing governments, NGOs, the UN, international conventions and companies together to develop policy, laws and best practice.
IUCN is the world’s oldest and largest global environmental network. IUCN is a democratic union with more than 1,000 government and NGO member organizations, and some 10,000 volunteer scientists in more than 150 countries. IUCN’s work is supported by 1,100 professional staff in 62 countries and hundreds of partners in public, NGO and private sectors around the world. www.iucn.org

About Reuters Foundation
Reuters Foundation was created by Trust Deed in 1982 to support media in developing countries and to share Reuters fact-based reporting skills. It is a UK-registered charity (number 1082139) and is governed by Trustees appointed in accordance with the articles of association. It is also a company limited by guarantee (number 4047905).
To date more than 5,000 journalists from 172 countries have benefited from fully sponsored training provided by the Foundation on international media, business journalism, environmental and health issues, television coverage, conflict reporting and crisis-response. More information can be found at www.foundation.reuters.com