Gland, Switzerland, 24 April 2019 - IUCN’s Director General has appointed a team of distinguished scientists to examine the impacts of oil and gas development and other threats on endangered whales found off the coast of Russia’s Sakhalin Island, IUCN announced today. 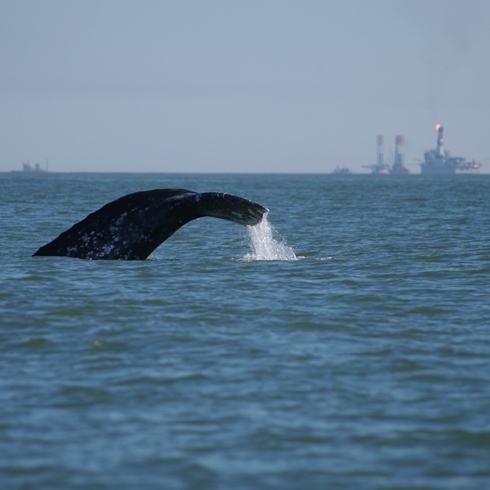 These experts will serve for three years on the Western Gray Whale Advisory Panel (WGWAP), where they will continue the efforts of previous panels to: (i) explore ways of assessing and managing cumulative impacts from industry activities; (ii) evaluate new approaches and technologies for monitoring this endangered population; and, (iii) study underwater noise-related issues, for example the effects of seismic surveys and vessel traffic in the region. Furthermore, the Panel will collaborate with the International Whaling Commission (IWC) to update the IUCN/IWC Gray Whale Conservation Management Plan and contribute to a stakeholder consultation on the implementation of that plan, involving IUCN Members, IUCN Commissions, range-state governments, NGOs and industry.

As confirmed by IUCN’s Director General Inger Andersen in December 2018, the Panel continues to be chaired by Dr Randall Reeves of Canada, who also chairs the Species Survival Commission’s Cetacean Specialist Group. The IWC has also re-appointed Dr Greg Donovan, its Head of Science, to co-chair the Panel and serve as an official liaison with the IWC.

The other Panel members are:

The Panel members were selected through an open and competitive process in line with relevant IUCN Policies and Procedures and the WGWAP Terms of Reference. See the bios of all the Panel members here.

“The scientists joining this well-established independent advisory panel bring exceptional skills and experience that will support the Panel’s deliberations and recommendations,” says Dr Reeves. “The ultimate aim is to assist Russia in its efforts to limit the impacts of offshore industries on these endangered whales, and ensure the best available tools and approaches are applied to protecting both the whales and the biologically rich marine environment off Sakhalin.”

In the last century, gray whales (Eschrichtius robustus) were severely overexploited in the western Pacific. During the 1980s, a few of these whales were ‘re-discovered’ feeding off Sakhalin Island, where there are large offshore oil and gas deposits and other natural resources. For the past 15 years, WGWAP has provided scientific and technical advice on the conservation and recovery of this gray whale population to Sakhalin Energy, one of the main oil and gas operators in the region, as well as other stakeholders.

Sakhalin Energy looks forward to continued collaborative and constructive working with the WGWAP.

From 2004-2015, the Sakhalin gray whale population increased around 3-4% per annum. As a result, in 2018, the population was moved from Critically Endangered to Endangered on the IUCN Red List of Threatened SpeciesTM.  However, WGWAP and its partners have warned that the further cooperation and involvement of all industries in the region – from oil and gas operators and fisheries to shipping and tourism – is essential for assessing cumulative impacts and encouraging continued population recovery.

Note: IUCN will host a series of WGWAP Task Force meetings in Gland from 26-29 April 2019 to address several key issues, including cumulative impacts, underwater noise, as well as new and emerging technologies for monitoring whale distribution, movements and other aspects of the whale behaviour and life history.  In November 2019, the Panel will meet with Sakhalin Energy and representatives from financing institutions, NGOs, the Russian government and other stakeholders at the 20th WGWAP meeting in Moscow.

WGWAP is managed by IUCN as an independent scientific advisory body. The core principles for such IUCN panels are independence, transparency, accountability and engagement.

For more information about WGWAP, please visit the website.