On International Gibbon Day, IUCN Save Our Species announces it is launching a new Gibbon conservation initiative this year to save four Critically Endangered and Endangered gibbon species. 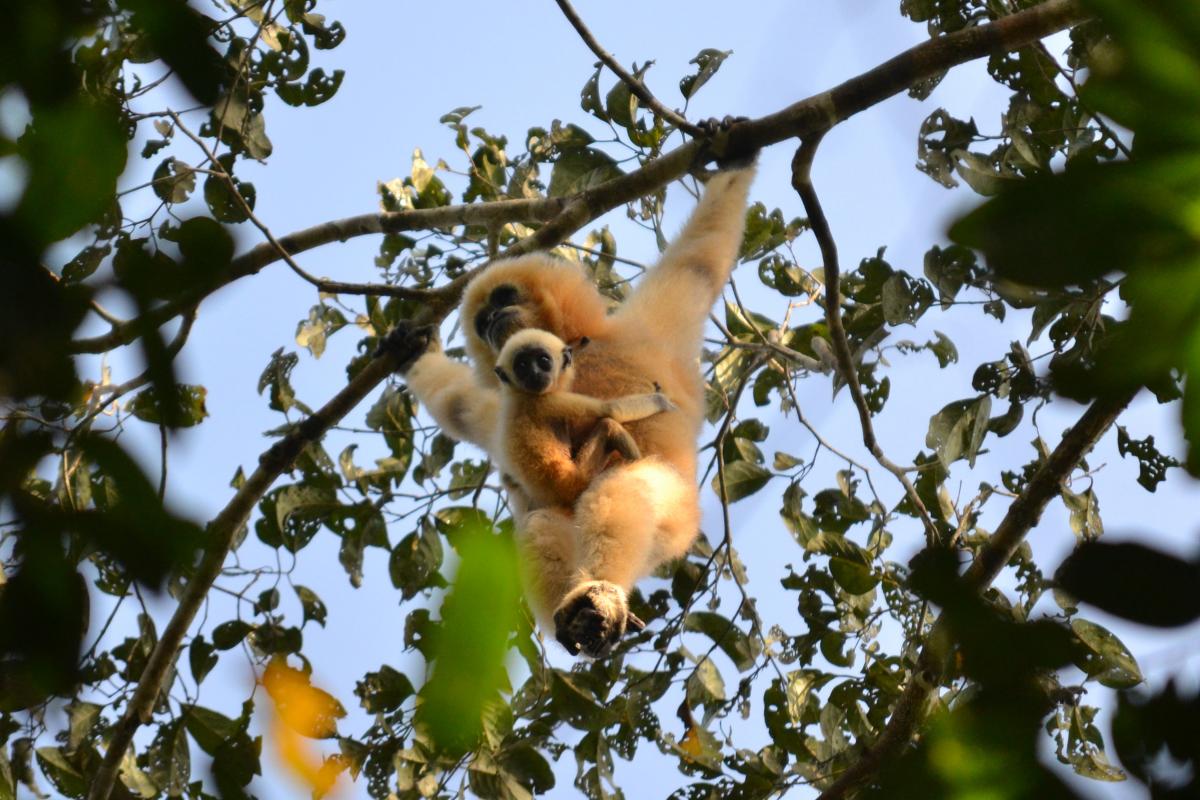 This International Gibbon Day, IUCN Save Our Species announces its support to conservation initiatives in Asia to save four gibbon species:  the Critically Endangered Cao Vit gibbon (Nomascus nasutus) in Viet Nam and Northern white-cheeked gibbon (Nomascus leucogenys) in Lao PDR as well as the Endangered Northern yellow-cheeked crested gibbon (Nomascus annamensis) in Cambodia and the silvery gibbon (Hylobates moloch) in Indonesia.

Some CHF 500,000 (EUR 466,524) for the four projects was donated by Private Foundation from the Netherlands.
The IUCN SOS Gibbons initiative is implemented in collaboration with the IUCN Asia Regional Office.

Known for their vigorous vocal displays, gibbons are unique small apes, with 20 species, all of them endemic to South and Southeast Asia. Gibbons play an important role in seed dispersal, which contributes to maintaining the health of the forests they call home, and benefit the communities that also use forest resources.

“I believe the presence of gibbons in the forest is contributing to the maintenance of the forest cycle — in particular, their role in seed dispersal, which keeps the forest healthy and sustainable,” said Dudi Denci, Coffee farmer, West Java, Indonesia.

Gibbon populations continue to dwindle because of poaching, one of the major threats to these small apes whose bones are commonly used in traditional medicine as ‘monkey bone balm’ or tonic additives. The decrease in gibbon population is also largely due to habitat loss as a result of urban expansion and land conversion, mostly for agriculture.

Globally, gibbons are one of the most threatened families of primates; five species are considered Critically Endangered, 14 Endangered and one Vulnerable on the IUCN Red List of Threatened Species™.

This means they are all at significant risk of extinction. Conserving these small apes seems a daunting task. However, interventions are underway in Cambodia, Indonesia, Lao PDR and Viet Nam, through the support of IUCN Save Our Species.

“Time is running out to conserve gibbons and their habitats. We need to act now and ensure that people and gibbons can live in harmony,” said Alexander McWilliam, Programme Coordinator and Project Manager, Natural Resources Group, IUCN Asia.

In Indonesia, the Endangered silvery gibbon suffers from illegal pet trade and hunting, as well as habitat loss and fragmentation. They are highly sought after as pets and face high demand on the global black market. Conservation action will ensure the rehabilitation and release of rescued silvery gibbons while protecting their natural habitats.

In Viet Nam, the conservation of the Critically Endangered Cao-Vit gibbon, the world’s rarest ape, will be addressed through the consolidation and enhancing of sustainable, transboundary conservation efforts. Primates are targeted in the region for use in traditional medicine and this potential threat remains a concern.

Another intervention is the securing of corridors to connect gibbon populations across the landscape of Nam Et-Phou Louey National Park in Lao PDR. This is to address the growing impact of habitat fragmentation due to infrastructure development and forest degradation.

The IUCN Save Our Species Gibbons initiative is a three-year project focusing on improving management plans of the conserved areas covering gibbon habitats as well as enhancing law enforcement, capacity development, awareness raising and initiating livelihood opportunities for local communities to promote healthy co-existence between humans and gibbons.

To learn more about the IUCN Save Our Species Gibbons initiative, see here: https://www.saveourspecies.org/our-work/sos-gibbons