Third update in 2017 of the IUCN Red List of Threatened Species is announced in Tokyo, Japan

IUCN revealed the conservation status of Japanese and global species at a press conference in Tokyo on 5th December, 2017 to a full house of Japanese and international media correspondents. Many of the new assessments have been possible thanks to a strategic five-year partnership between IUCN and Toyota Motor Corporation, which aims to increase knowledge on the extinction risk of more than 28,000 species – including many that are key food sources for a significant portion of the global population. 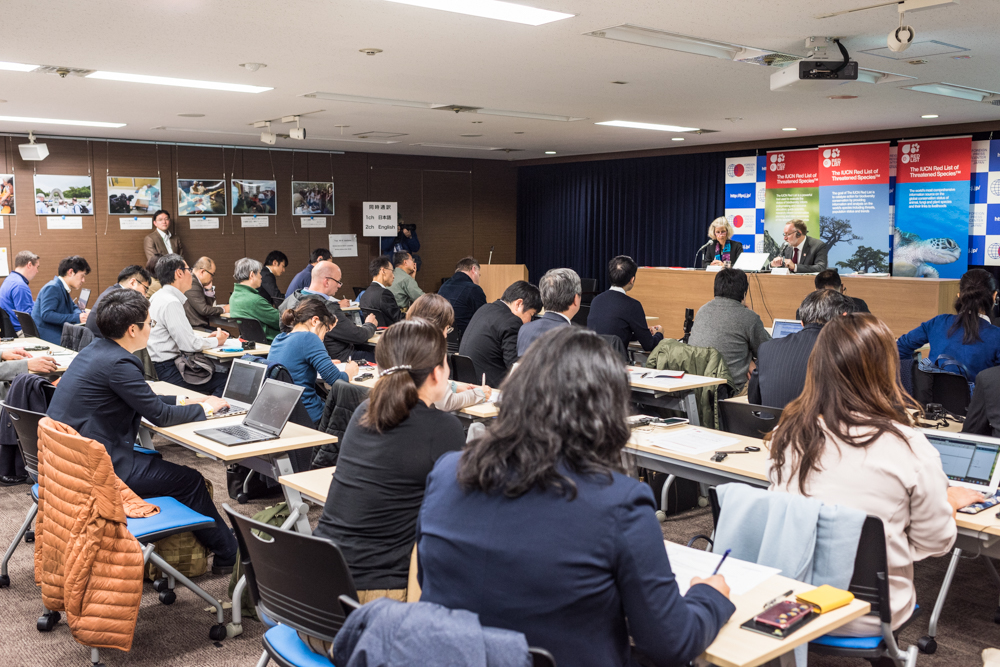 Dr Jane Smart, Global Director, IUCN Biodiversity Conservation Group, opened the press conference by announcing the results of the first global assessment of crop wild relatives (CWR) and why the status of CWR’s affect everyone’s daily bowl of rice or slice of toast. Mr Craig Hilton-Taylor, Head, IUCN Global Species Programme Red List Unit, spoke about the other species in the update that are highlighted in the IUCN press release, including news that 33% of Japan’s endemic reptiles are sliding towards extinction. He also highlighted the IUCN Red List’s critical role in demonstrating that we are living in the age of a 6th mass extinction.

“This time, the threats pushing species to extinction come from humans, but this means that we can do something about the situation. There has never been a greater need to understand the current status of the species on which our own survival depends,” said Hilton-Taylor.

Comments on the Red List update were invited from representatives of the Ministry of the Environment of Japan, Japan Committee for IUCN and Toyota Motor Corporation. The importance of conserving CWR’s for food security featured heavily, and Mr Naohisa Okuda (Ministry of the Environment) highlighted how the news directly relates to the Aichi biodiversity targets 12 (on preventing species extinctions) and 13 (on the need to conserve genetic diversity).

Mr Tsunao Watanabe (Japan Committee for IUCN), pointed out the cultural resonance that reptiles have to Japanese people, and called on Japan to create plans to protect these species. Mr Takao Aiba (Toyota Motor Corporation) reiterated this and rallied a call to action to “keep our foot on the pedal and ensure that knowledge for conservation continues to flow faster than ever.”

The Road Ahead: TOYOTA and THE IUCN RED LIST OF THREATENED SPECIES

From CBD COP 10, Nagoya, Japan to COP15, Beijing, China: the power of stakeholder engagement for biodiversity conservation in the final years of the International Decade of Biodiversity

Following on from the press conference, IUCN and Toyota hosted a panel discussion about the power of stakeholder engagement for biodiversity conservation in the final years of the UN Decade on Biodiversity. Representatives from the private sector, government and NGOs, were brought together to review what has been done for biodiversity conservation through stakeholder involvement and what can be achieved in the final years of the current CBD Strategic Plan for Biodiversity 2011-2020, with a look ahead to the post 2020 Framework.

Dr Jane Smart (IUCN), Mr Takao Aiba (Toyota Motor Corporation), Mr Naohisa Okuda (Ministry of Environment, Japan), Mr Tsunao Watanabe (Japan Committee for IUCN) and Mr Sadayoshi Tobai (WWF Japan) each presented their ideas and plans for the way ahead and answered an array of questions from both the panel and the audience.

The key message from the panel discussion was that engagement and investment from all stakeholders in conservation is critical if we are to achieve the biodiversity targets and sustainable development goals agreed to by governments and essential to securing the life support systems of the planet towards 2020 and beyond.

Progress towards the Aichi Targets was illustrated, but it was clear from the presentations and discussions that there are huge gaps remaining in their implementation. For the post 2020 period, Dr Smart highlighted the challenge of implementing the SDGs in a biodiversity-conscious manner. “To meet this challenge, we need to increase meaningful engagement with the private sector, and need to figure out a way to do business unusual and work towards a new 2050 Vision that is ambitious, forward looking and enabling – a call to action for a positive paradigm shift in the conservation of biodiversity.”

IUCN experts from the Red List Unit and the Freshwater Biodiversity Unit led an intensive Red List Assessor Training Workshop in Tokyo from the 4th to 6th December. The 14 participants, with expertise on plants, marine and freshwater fish species, invertebrates, and coastal resources and ecosystems, are now equipped with the skills to assess Japanese species for the Red List. Representatives from the Japan Ministry of Environment, National Research Institute of Far Seas Fisheries, National Research Institute of Fisheries, several Japanese universities and museums were present.