What does the new trade ban mean for pangolin conservation?

Pangolins gained the highest levels of protection under CITES with the decision to bring in a ban on international trade. Dan Challender from IUCN’s Global Species Programme and Co-Chair of IUCN’s SSC Pangolin Specialist Group looks at what this means for the conservation of these ‘scaly anteaters’. 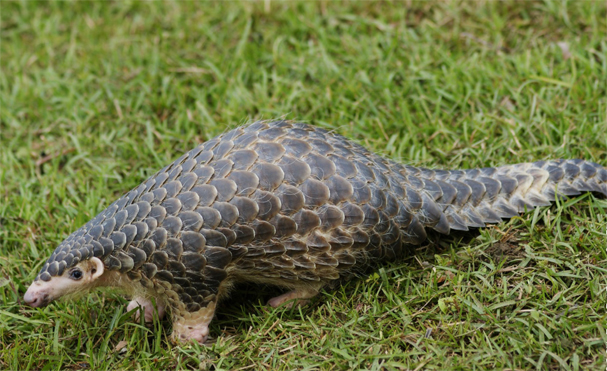 Until recently, pangolins were little known, arguably forgotten species, receiving little conservation attention and investment. Their profile has grown enormously over the last five years thanks to efforts from pangolin range states, the IUCN SSC Pangolin Specialist Group and its members, and other countries and actors.

Poaching of pangolins for international wildlife trafficking is a major threat to the species. It is estimated that since 2000, more than 1 million pangolins have been traded illegally at the international level, which would make them the most trafficked wild mammal in the world. Since 2014, all eight pangolin species are classified as threatened with extinction on The IUCN Red List of Threatened SpeciesTM.  The Chinese and Sunda species are now listed as Critically Endangered, the Indian and Philippine pangolins as Endangered, and the four African species as Vulnerable.

Pangolins were one species group hitting the headlines at the recent IUCN World Conservation Congress (Hawai‘i, 1-10 September), where a motion was passed urging greater support for pangolin conservation. This enthusiasm carried over to the 17th meeting of the Convention on International Trade in Endangered Species (CITES CoP17), which brought in an international trade ban for all eight pangolin species.

A question being posed by some is, what impact will this have given that most trade in pangolins is illegal? It is true that an Appendix I listing will not automatically stop the trafficking of pangolins, but there are some benefits to the above decisions. They should mean that enforcement will be prioritised in some countries, for example China, where confiscations of pangolins will have to be dealt with at a national level as opposed to regional level.

It also means penalties for trafficking pangolins should increase in a number of countries including Brunei Darussalam, Hong Kong SAR and the Philippines. And, it will also help simplify regulation by removing confusion caused by zero quotas, with international trade in wild-caught animals for commercial purposes being unambiguously prohibited.

These decisions have hit the headlines around the world and have been celebrated by many. However, while the above benefits should be welcomed, these decisions do not comprise conservation victories. The CITES Parties only include species in Appendix I when they are considered to be threatened with extinction and as a last resort. If anything, these listings more accurately reflect a failure of the Parties and the conservation community collectively in recent decades to address the threats pangolins face.

There are also potential costs to these listings that need to be considered. For instance, will the introduction of an international trade ban lead to increasing prices for pangolin derivatives and higher incentives to poach and traffic the animals, and will this expedite the overexploitation of populations? This is what happened when rhinos were listed in Appendix I in 1977 with the black rhino going locally extinct in at least 18 range states as a result. There is therefore a need to monitor the impact of these listings on markets, trade dynamics and populations. Thankfully, decisions taken at the CITES conference are supportive of such monitoring.

A Resolution on pangolin trade and conservation also adopted at the conference urges all Parties to take a range of measures pursuant to conserving pangolins, including improving law enforcement efforts, ensuring adequate control of any pangolin stockpiles that exist, reducing demand for illegal pangolin specimens, and working with local communities to manage pangolin populations. Two Decisions were also adopted which direct the CITES Secretariat to liaise with ICCWC (the International Consortium on Combating Wildlife Crime) partners and regional law enforcement agencies and ask them to include pangolins in their work programmes; and, subject to funding, prepare a report on the status, trade, stockpile management, demand management and inter alia current captive pangolin populations for the 69th meeting of CITES Standing Committee in 2017.

It is generally well recognised that a suite of multifaceted interventions are necessary to ensure the conservation of pangolins and CITES is one tool that can be used. Importantly, the aforementioned reporting will allow the Parties a first opportunity to evaluate the costs and benefits of the listing decisions made at CoP17 and make recommendations on how to further ensure pro-pangolin conservation outcomes are the result of decisions made in South Africa.