Preliminary findings of a comprehensive scientific survey examining the impact of the climate change-related 2016 mass bleaching in the Maldives indicate that all reefs surveyed were affected by the event. Approximately 60% of all coral colonies assessed – and up to 90% in some sites – were bleached. 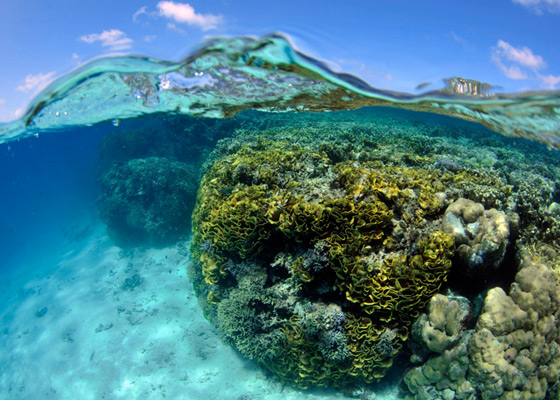 The survey – conducted by the Maldives Marine Research Center (MRC) and the Environmental Protection Agency (EPA), in partnership with the International Union for Conservation of Nature (IUCN) – brought together coral reef and bleaching experts from 11 national and international institutions and universities to assess the impact of the mass bleaching on coral reefs in the Maldives.

“Bleaching events are becoming more frequent and more severe due to global climate change,” says Dr. Ameer Abdulla, research team leader and Senior Advisor to IUCN on Marine Biodiversity and Conservation Science. “Our survey was undertaken at the height of the 2016 event and preliminary findings of the extent of the bleaching are alarming, with initial coral mortality already observed. We are expecting this mortality to increase if bleached corals are unable to recover.”

The Maldives contains approximately 3% of global coral reefs and is one of the most vulnerable countries to climate change impacts given its mean land height of 1.5m.

Funded by the U.S. Agency for International Development (USAID), the survey was undertaken in Alifu Alifu Atholhu (North Ari Atoll), a representative atoll of the Maldives.  It examined both inhabited and uninhabited coral reef islands in sheltered and exposed locations.  The main purpose of the survey was to document the extent and severity of the bleaching in the Maldives, which occurred as a result of unusually high temperature exposure and local human stressors, using Alifu Alifu as a case study.

“This survey was a key component of the Government´s Bleaching Response Plan,” says Dr. Shiham Adam, the Director General of the MRC.  “It has provided us with unique insight into the effects of this coral bleaching event, and helped us understand the implications of climate change for our nation. Understanding the pattern and impacts of bleaching in Maldives will help us guide local management of highly vulnerable sites.”

Bleaching results from the expulsion of symbiotic algae living in coral tissues due to stress caused by extreme and sustained changes in temperature, light, or nutrients.  This process causes coral to turn completely white and can occur at large spatial scales spanning entire reefs and countries. Bleached corals are at risk of death if conditions do not return to normal.

To coordinate a national response to the phenomenon and provide guidance to reef users on how to manage the impact, the Maldives government has created the Maldives National Bleaching Task Force. Led by the MRC, the Task Force includes the Environmental Protection Agency and is supported by IUCN. A national monitoring program has also been developed by MRC and IUCN to evaluate recovery of reefs across the country.

The program enables resort marine biologists, citizen scientists, and divers across the Maldives to contribute data that will help understand the national effects of the global bleaching event.  Reported data are currently being analysed in order to strategically identify vulnerable and resilient reefs across the country that should be managed or protected.

“As part of our management guidance to local communities and resorts, we have emphasised the importance of reducing local stressors such as sedimentation, pollution and overfishing of herbivores,” says Mr. Naeem Ibrahim, Director General of the Environmental Protection Agency.  “Local management actions can build the resilience of coral reefs thus helping them to survive this national bleaching event.”

Practices such as dredging, sand replenishment, and fishing or purchasing of herbivorous fish such as parrotfish and surgeonfish – which are essential for reef recovery – are strongly discouraged.  Reef users are urged to minimise adverse impacts to corals during this sensitive and critical time.

“Initiatives such as the coral bleaching survey are just one example of USAID’s commitment to mitigating the effects of climate change in Maldives. The U.S. Government is taking a lead role in addressing this phenomenon through mitigation, adaptation and financial assistance,” says Thomas Bayer, Acting Mission Director for USAID Sri Lanka and Maldives.

Ocean and coral reef conservation will be among the issues highlighted in the IUCN World Conservation Congress 2016 taking place from September 1-10 in Hawai´i.  The United States of America is the host of the IUCN Congress.