The Isla San Pedro Mártir Biosphere Reserve is one of the best-preserved sites in the Gulf of California (Sea of Cortez), has great scientific relevance and should be considered a natural laboratory of adaptation and evolution. This marine protected area has great biological richness, with 292 species of flora and fauna, both marine and terrestrial, of which 42 species are protected under Mexican law (NOM ECOL-059 2001), 30 on the IUCN Red List, and 36 in CITES. 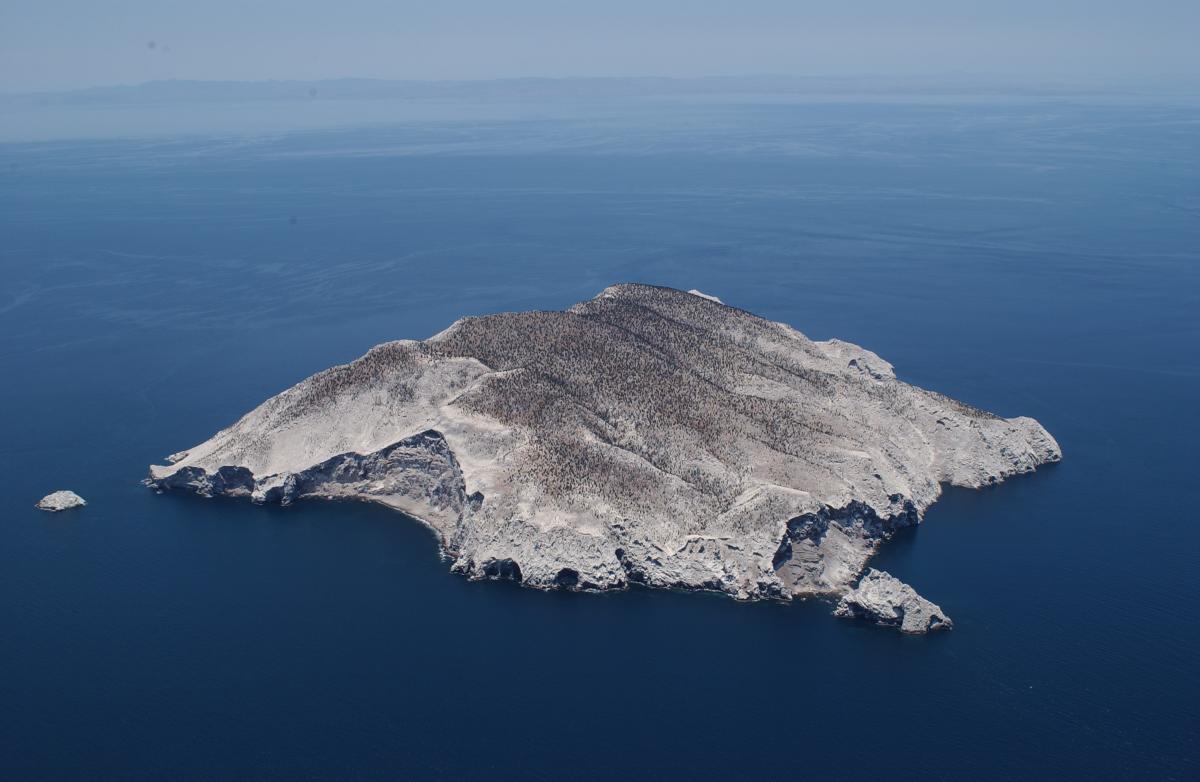 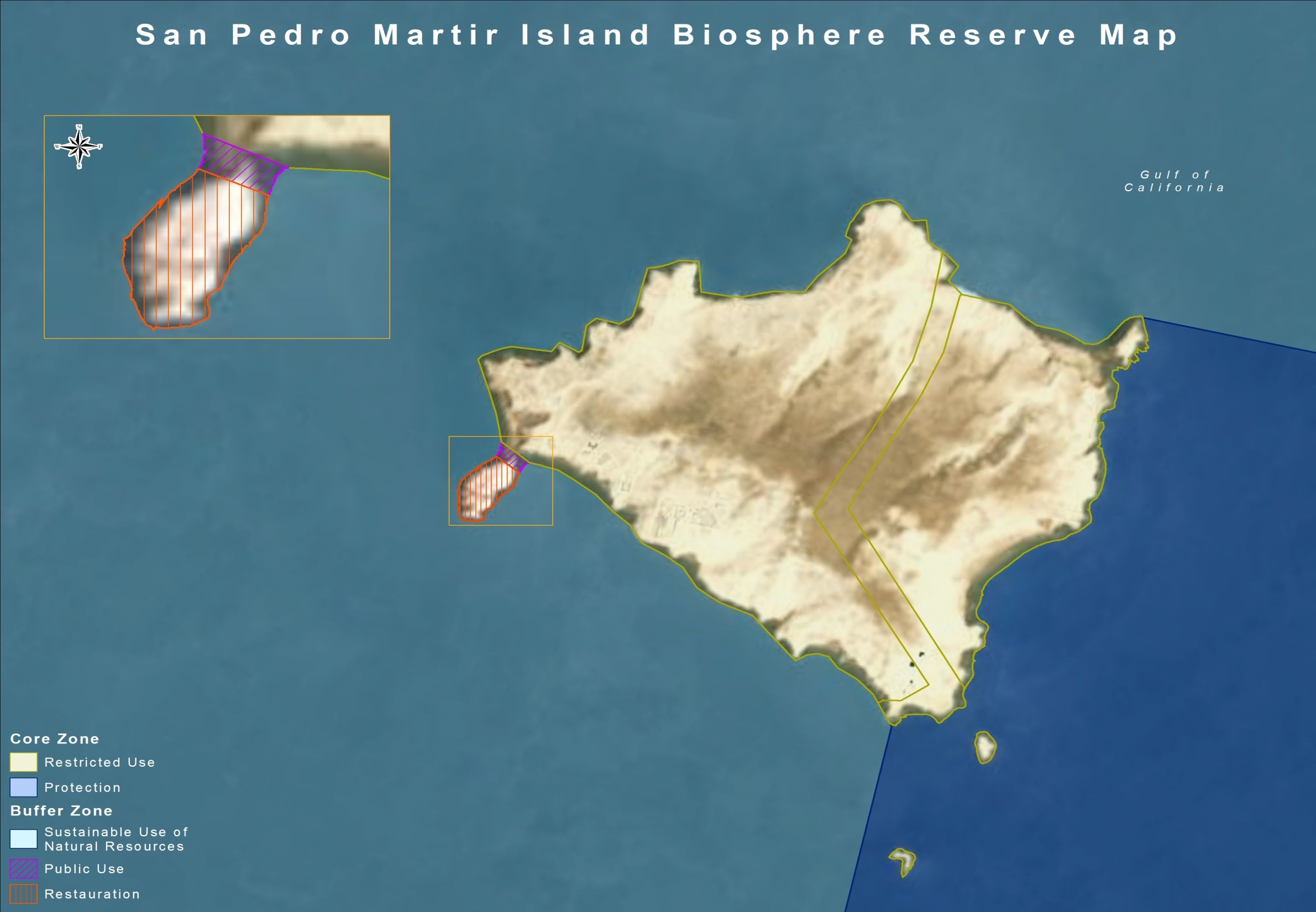 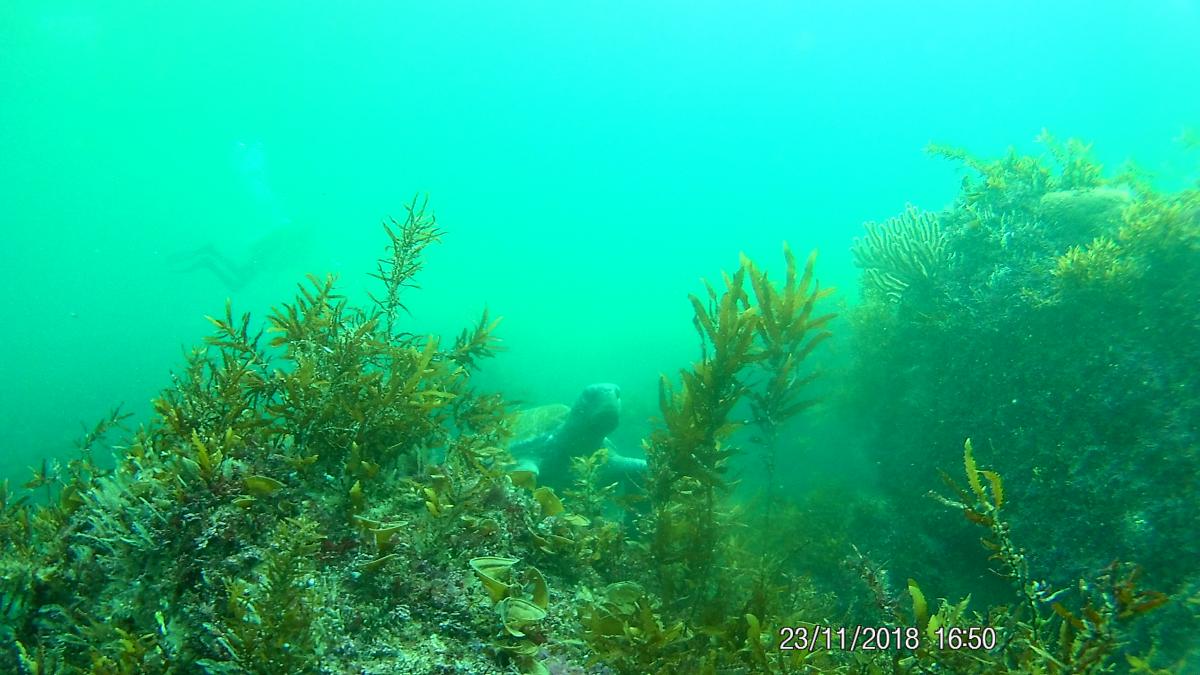 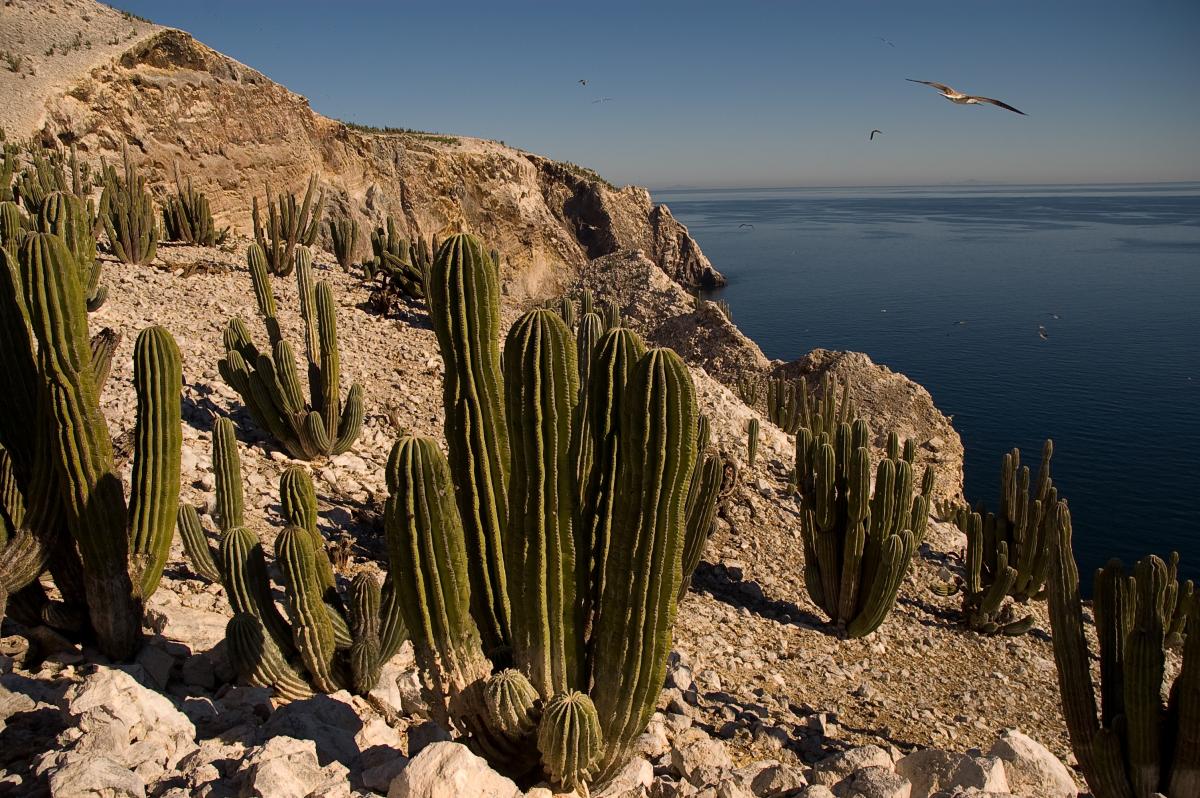 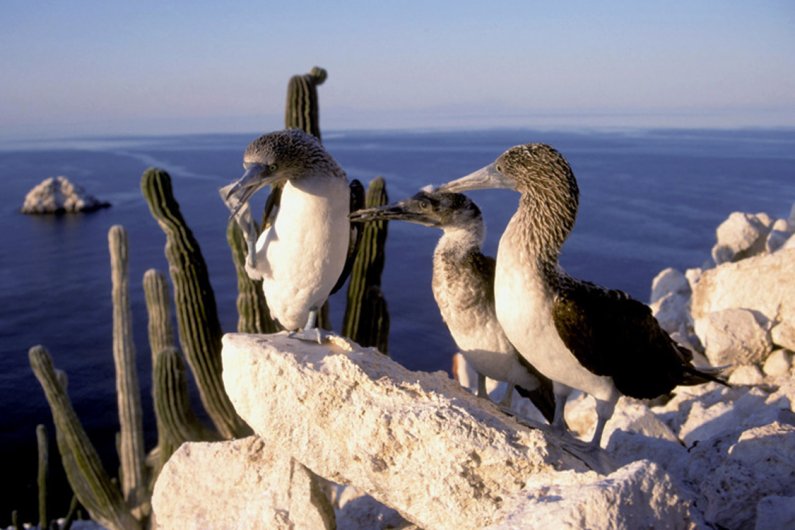 This island is home to the world´s largest nesting colonies of blue-footed boobies (Sula nebouxii) and brown boobies (S. leucogaster), one of the largest colonies in Mexico of brown pelicans and probably the largest colony in the Gulf of California of the red billed tropic bird (Phaethon aethereus). It also houses the fourth most important breeding colony of sea lion (Zalophus californianus) in the Gulf of California. In the surrounding waters there are 14 species of marine mammals, including a resident group of sperm whales (Physeter macrocephalus) often being seen on the western side of the island.

In the insular habitat there are two species of endemic reptiles: the whiptail lizard (Aspidoscelis martyris) and side-blotched lizard (Uta palmeri); while the black king snake (Lampropeltis nigritus) is restricted to just a few islands in the Gulf. The fishing bat (Myotis vivesi), which is endemic to the Gulf of California, also lives on this island. Black rats (Rattus rattus), were introduced to the island during the extraction of guano in the nineteenth century but the island is currently free from exotic species, due to an extensive eradication program in 2007. The top of the island is covered by a forest of columnar cacti, considered among the best-preserved portions of the Sonoran Desert. The coastal waters of the reserve are home to five types of marine habitats, including black coral (Antiphates galapagensis) and rodolith beds, which both sustain a rich diversity of invertebrate and fish species. There are also Sargassum forest, sandy areas, and significant rocky habitat coverage that is home of many species.

Photo: CONANP
Because of the ecological importance and unique features, the reserve was recognized as a Biosphere Reserve as part of the UNESCO Man and Biosphere Reserve (MAB), a UNESCO World Natural Heritage Site and also a RAMSAR site. It is included in the priority marine regions of Mexico. Because of its fair governance and effective management approaches that are delivering successful conservation outcomes, the reserve is also recognized by being one of the newest sites admitted to the IUCN Green List of Protected and Conserved Areas (March 2019).

Within the Gulf of California (Sea of Cortez), the region known as the Midriff islands acts like the resonance chamber for the complex ecological processes that sustain the region's immense biological wealth. The narrowness imposed by the 45 islands accelerates the currents and produces intense mixing of waters, bringing nutrient rich deep waters to the surface. Surrounded by places with ominous names which give away the intensity of the currents and the difficulties and risks faced by former explorers in the region - Canal del Infiernillo (Little Hell Channel), Canal de Salsipuedes (Get out if you can Channel) - the mythical richness of the waters of the Gulf reaches it epitome here. Around the islands, marine productivity is among the highest in the world, resulting in small-pelagic fish (e.g. sardines, anchovies) densities hardly imaginable in another regions. For this reason the area is a favorite place for whales and countless seabirds, where they can spend the winter and spring season in the productive abundance of the marine upwelling.

In the context of these wonderful islands, Isla San Pedro Mártir appears as one of the most extraordinary places. Along with Isla Rasa, it is the most important bird sanctuary in the Gulf of California. The desert and the sea meet in Isla San Pedro Mártir. The terrestrial portion of the island has been protected since 1978 by a decree declaring it part of the Migratory Bird and Wildlife Reserve and Refuge Zone. On June 13, 2002, a decree was published declaring Isla San Pedro Mártir a Biosphere Reserve, along with a neighboring marine belt. The declaration of Isla San Pedro Mártir as a Biosphere Reserve was the result of one of three pilot projects initiated in the Gulf of California in 1999, as part of an effort to extend the protection of the land portion of the islands to their surrounding waters. The implication of this new management regime is an example of community-based proposals and management reaching international forums. 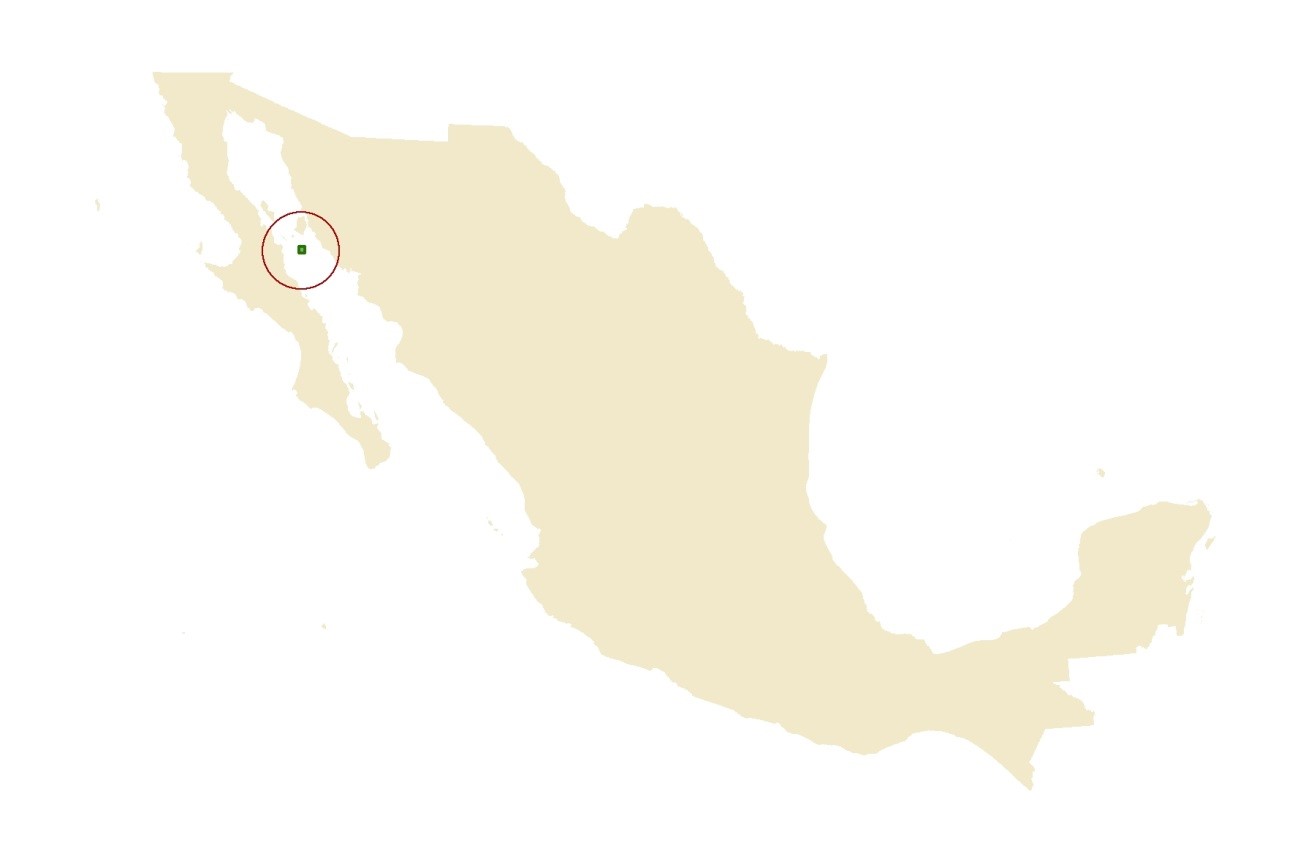 Photo: CONANP
San Pedro Mártir is located off the coast of the Municipality of Hermosillo in the state of Sonora. It is the most oceanic island of the Gulf of California. The distance from the island to the nearest point on Sonora´s coast is 61 km (to Punta Kino also known locally as Punta Hueso de Ballena or Punta San Nicolás). To the coast of the Peninsula of Baja California the distance is 64 km (to Punta San Gabriel or Punta San Francisquito). At a distance of 37 km to the northwest is the coast of San Esteban Island, 39 km north of Tiburón Island and 37 km northeast of Date Island (also called Turner Island). The nearest port facilities are in Bahía de Kino, Sonora.

In the Midriff Islands Region, during the winter algae grow in high densities, covering a significant percentage of the surface of the intertidal and subtidal zones. Sargasso forests form around the islands, serving as refuges for larvae and juveniles of invertebrates and fish species.

The list of monitored invertebrates in island includes one species of coral, 16 mollusks, two lobsters, and 17 species of starfish, sea urchins, and sea cucumbers. Approximately, 900 species of fish (including lampreys, sharks, rays, and bony fish) are present in the Gulf, including rocky reef top predators such as large groupers (Mycteroperca spp.) and snappers (Lutjanus spp). In the island over 80 fish species had been monitored annually since 2005, observing cycles of high and low densities approximately every 5-6 years. In some years is common to observes large number of small leopard groupers (5-20 cm), and during El Niño year tropical species arrive to the island.

Among the pelagic fish that visit the waters adjacent to the island, sharks, such as the hammerhead (Sphyrna lewini), manta rays and smaller pelagic fish are common. The small pelagics are of great importance for marine food webs and the sea birds inhabiting the islands of the Gulf of California. It is common to observe in the pelagic zone of the island groups of large fish, sea birds and common and bottlenose dolphins in feeding of sardines and anchovies.

The pelagic zones of the Gulf of California are home to five of the world´s seven species of sea turtle and it is common to observe two species (Chelonia mydas and Caretta caretta) close to the island. The island is a place to find juveniles sea turtles in transit from coast to coast of the Gulf of California.There are also occasional records of the yellow-bellied sea snake (Pelamis platurus).

On Isla San Pedro Mártir, 24 species of vascular plants have been reported. The flora is dominated by a cardon (Pachycereus pringlei) forest that covers almost the entire area, including the upper parts of the island and whose shape presents a considerable phenotypic differentiation with respect to the populations on the continent. This species is mainly pollinated by a subspecies of bee (Diadasia rinconis petrinus).

The main threats identified that can influence the conservation outcomes of the Reserve include: overfishing caused by sport and small-scale fishing; Night diving illegal fishing; Human presence on the island. By meeting the strict requirements of the IUCN Green List standard, these threats are generally being addressed, and will continue to be assessed as part of the monitoring requirements of the IUCN Green List process.