The Governments of Vanuatu and the Solomon Islands on 7 October signed a landmark Maritime Boundary Treaty to officially demarcate the mutual border of each Island State’s Exclusive Economic Zone (EEZ). 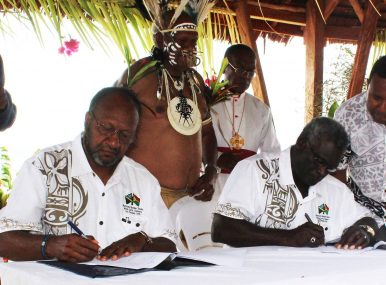 The signing ceremony took place on Moto Lava Island of Vanuatu’s Toba Province with the Prime Ministers of both nations taking part. The decision was a milestone for the two Nations, concluding some 33 years of negotiations, which began in 1983, acting as clear demonstration of the capacity that exists in the region to overcome such challenges. Furthermore, the decision is also a major win for conservation.

The International Union for Conservation of Nature (IUCN) Project Liaison Officer, Vatumaraga Molisa, based in Vanuatu, explained the significance of the outcome.

“The process has been part of the government’s mandate under foreign affairs as well as fisheries to delineate definite national borders. Now definite boundaries have been established we can start process of marine planning.”

Vatu also elaborated that the decision is exciting as it comes only a month after Vanuatu’s Ocean Policy passed approved through the Council of Ministers. The new policy sets out a clear management strategy for all marine use.

“In regard to the recent launch of the Oceans Policy, having definite boundaries will be beneficial for the implementation process. They clearly outline responsibilities and provides regulatory certainty over the jurisdiction of Ocean space. This will enable us to properly manage our marine resources as well as enhance cooperative efforts.”

While IUCN wasn’t involved in the negotiation process, the news is welcomed by the organisation who is indirectly linked to the areas involved through project funding and work with legislative development, including the recent Ocean’s Policy. To add to the conservation outcomes, it was also announced as part of the proceedings that Vetande, an uninhabited island on the new boarder, would become a “Cultural Marine Park.”

Vatu also noted that the decision is significant for the region in setting a precent in which other Island states can follow to secure the future of their Oceans.