Celebrating Mangroves – the super ecosystem of the tropics

On the occasion of World Mangrove Day, let’s hear it for mangroves the super ecosystem of tropical and subtropical latitudes! 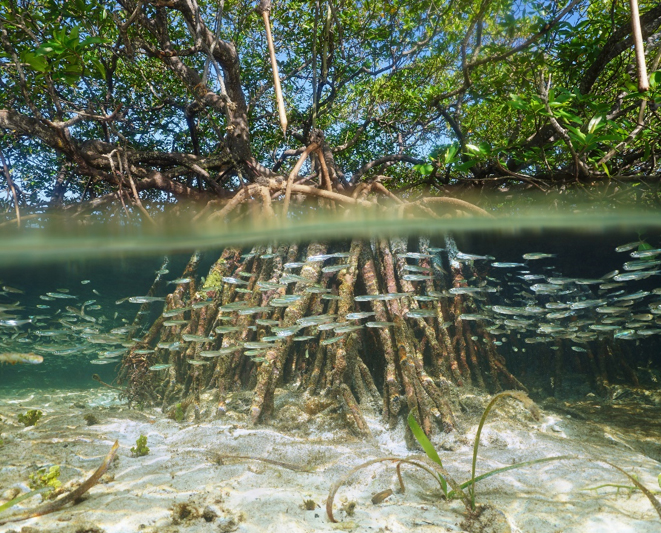 Life under the mangrove canopy

These forests have a special place in my heart, making the work I have done on this ecosystem very personal and rewarding. Between university years, I did fieldwork in the so- called “mosquito-ridden and muddy” mangroves of northern Madagascar and absolutely loved it. The soothing scent of rich silt is the prevailing aroma of the mangroves, and the mud provides an excellent and free spa treatment. Furthermore, numerous marine species, including fish and shrimp are known to use the shelter provided by mangroves as nurseries while they mature. They feed on leaf scraps and microorganisms, all while hiding from predators in the thick tangles of roots. Due to the alien and unusual characteristics of the mangroves, I found my attention constantly divided between appreciating the trees and their intertwined roots and marveling at the vibrant world of crabs and mudskippers living under and above the surface. Knowing that mangrove populations are dwindling, I recall feeling bittersweet as I ventured through the beautiful ecosystem that could be so much more.

I am not the only one who finds these forests amazing and valuable. According to UN estimates, over 100 million people live in proximity to mangroves. These dynamic ecosystems provide approximately US$33-57,000 per hectare per year of income to national economies in services like coastal protection, food and medicines. Furthermore, although this ecosystem covers less than 1% of our planet's surface, they pack a punch when it comes to dealing with climate change control. For example, a 10km2 area of mangrove forest can store the same amount of carbon as 50km2 area of tropical upland forests, essentially meaning mangroves are five times more efficient at storing carbon; even when compared to one of the most productive ecosystems on our planet. Unfortunately, the annual carbon emissions resulting from mangrove loss and degradation have been calculated to exceed the carbon emissions from the entirety of Austria[1]. Statistics like this alone give us all the more reason to preserve these forests.

There are other ecosystems that play similar roles in temperate regions, including salt marshes and seagrass meadows. It is estimated that under the right conditions, these ecosystems can store even more carbon than mangroves. When found together, healthy mangroves, seagrass, marshes and coral reefs support each other towards higher productivity and benefits for climate-threatened local communities that are dependent on the resources and biodiversity these ecosystems bring.

But how are mangroves so efficient at what they do? For those who have seen them, you will have noticed that this group of plants boasts a range of alien-like adaptations to their coastal and highly transitional environment. The roots of some mangrove species resemble stilts, while others are buttress shaped, causing the trees to raise stay stable in the mud and remain high above the water. This is because the mud these trees grow in is rather anaerobic, so the roots must expose themselves to the air and breathe in the oxygen as if they were living snorkels. Whilst most plant groups are intolerant to excess salt and waterlogging, mangroves manage these issues in a way that has even inspired the mechanisms of desalination plants in Denmark. Mangrove seedlings, properly known as propagules, are also very sophisticated in how they find a site to colonise. Different species of mangroves have a variety of strategies, but many are viviparous - meaning they are able to germinate while still attached to their parent tree and already able to photosynthesize through their casings. Moreover, most propagules are buoyant, and when ready to root, they will change their density to float vertically rather than horizontally. If conditions remain favourable, the newly sunken vertical propagules will lodge in the silt and root. If not, they can change their density once again to allow the seed more time to drift. Some species seeds can survive over 300 days waiting for advantageous conditions.

Why else do we need mangroves? The answer stems from the resilience of these trees. Disaster Relief and Reduction (DRR) is a growing issue brought to light by the increasing frequency of powerful cyclones like Idai and Kenneth that wreaked havoc across the Western Indian Ocean region early in 2019, severely affecting nations like Mozambique and Zimbabwe. Here is where mangroves come in. A belt of mangroves 100 metres thick has the ability to reduce wave height by two thirds[2], greatly reducing the damage to an area. On top of that, the protection and maintenance of existing mangroves is five times more cost-effective than the construction of traditional grey infrastructure (seawalls etc.)[3]. A cost analysis from the Philippines showed that protection was not only less expensive than erecting a seawall (without even accounting for maintenance costs), but also provided local communities with fisheries-related benefits worth over US$170,000. In the same country, one hectare of mangroves are estimated to save US$3200 per year in flood prevention benefits[4]. These studies show that nature-based solutions with DRR potential, where both nature and people benefit, are the most effective, both financially and in depth of impact. Therefore, with climate change making this a more immediate concern; governments should feel the loss of their protective line of mangrove cover as keenly as do the locals.

Unfortunately, mangrove populations have declined by 35% compared to their pre-1980 global coverage. While the rate of loss is slowing due to the increased recognition and awareness of mangrove benefits, the global rate of loss continues at approximately 1% per year. Those who lose out the most are local communities who depend on the mangrove forest for their livelihoods and the biodiversity living within the forest.

Studies by Save Our Mangroves Now!, a project jointly implemented by the IUCN, WWF-Germany, and funded by the German government, show that often there are overlapping jurisdictions and a lack of coordination within government ministries that cause these inefficiencies and conflicts. In both cases, experience tells us that community participation should be key to effective implementation and enforcement, since the primary users (locals) tend to have the greatest motivation in managing their ecosystem.

Nature-based solutions are increasingly recognized as the preferred approach to meet the needs of people and nature while addressing climate change risks. Several international institutions, including the European Union and IUCN, have programmes and projects adopting this approach.

Given the recent release of the IPBES report on the global state of biodiversity, which identified the changing climate as a potential major driver of future extinctions, it seems reasonable for policy makers to push for new and improved legislation combining climate change and biodiversity conservation. As such, nature-based solutions to these issues fit best and, of these, mangroves with associated ecosystems should certainly feature in their considerations.

Save Our Mangroves Now! Is an initiative that focuses on mangrove conservation as a nature-based solution in the Western Indian Ocean region by working with local experts, officials and communities to develop capacity and awareness of the importance of mangroves.

Thanks to Bora Yagiz (Rutgers University) for his contributions to this piece.