Around the world, rooted in discriminatory gender norms and shrouded in impunity, gender-based violence (GBV) occurs in all societies as a means of control, subjugation and exploitation that further feeds gender inequality. 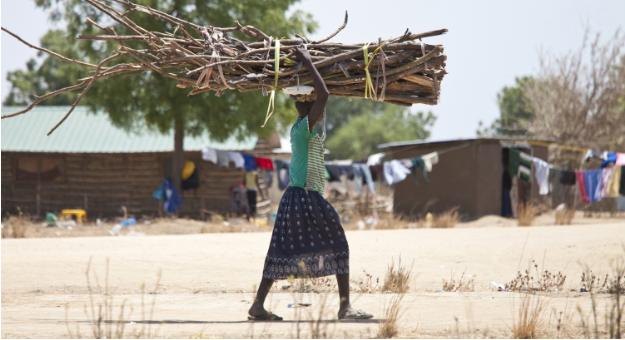 In South Sudan, a woman carries a heavy load of firewood on her head. As with many parts of the world, women and girls are responsible for collecting water and firewood, facing the risk of gender-based violence en route.

At 16 years-old, Hiba1 carries a heavy but important burden above her head: the firewood that is essential for her family, who needs it to cook meals. In South Sudan, deforestation forces Hiba to venture further and further away into isolated areas to collect firewood. During one of these excursions, three armed men happened upon Hiba, and they gang-raped her.

Under a partnership with the United States Agency for International Development (USAID) called Advancing Gender in the Environment (AGENT), the International Union for Conservation (IUCN) has gathered and published experiences from across the world to provide environmental policymakers and practitioners with evidence of the multiple types of interlinkages between GBV and environmental issues. The study, Gender-based violence and environment linkages: The violence of inequality, reviewed over 1,000 sources of information, gathered nearly 100 case study submissions, and analysed survey responses from over 300 practitioners along with numerous expert-informant  interviews, finding three major areas where GBV-environment linkages act as barriers to equitable, effective, rights-based conservation and sustainable development. Understanding and addressing these issues will be essential to achieve the Sustainable Development Goals (SDGs).

In Zimbabwe, a woman clears a field while carrying a baby on her back. As in many places in the world, women have the double burden of income generation and household work.

GBV is a means of control, enforcing and protecting existing privileges related to natural resources. Sometimes, changes in access and control over resources creates tensions within families that result in Intimate Partner Violence (IPV). For example, when attempting to enter into agricultural markets, women can experience domestic violence as their partners seek to control finances to maintain women’s economic dependence on them.2 In addition to risks at home, women entering into agricultural markets may also experience risks outside the home, such as sexual exploitation, particularly where national and customary laws, societal gender norms and traditional gender roles dictate who can access and control natural resources.

In Zimbabwe, a renewable energy plant company promised community development and jobs in exchange for use of community lands. Instead, the plant development created pressures on land rights, forcing women like Tsitsi3 into precarious situations, particularly when infrastructure works breached allocated boundaries onto land owned by community members. To prepare for the plant’s construction, her grandmother was required to help remove tree stumps. Being unable to do so, she was forced off her land, so Tsitsi and her grandmother went to a nearby village. There, when it was time to give out new plots, “the headman said we were too new to receive land and if I wanted land, I must have sex with him.” With no money, resources or land, Tsitsi was forced into survival sex.

Near the Andes, regions like La Rinconada (pictured) and the Madre de Dios region of Peru experience high levels of  illegal gold mining and sex trafficking.

Threats to the environment, including from illicit and illegal activities, are also linked to GBV. Actors involved in illegal resource extraction have used GBV to exert control over communities. Both illegal wildlife trade activities and militarized anti-poaching responses have negative impacts on communities that can include GBV.

In other cases, GBV has been used by armed military and security forces to pressure local communities into participation in environmentally destructive extractive activities. Meanwhile, in climate disasters, LGBTQI (Lesbian, Gay, Bisexual, Transgender, Queer/Questioning and Intersex) people have been left out of shelters, increasing their exposure to death on the basis of their gender identity. In illegal, environmentally destructive industries, such as illegal logging and mining, sex trafficking is used to enable activities.

In Peru, Azucena4 paints her 15-year-old face with make-up - exactly the way she was taught to. In the Madre de Dios, the heart of the country’s illegal gold mining region, women and girls like Azucena are deceived with promises of housework and sold to brothels to supply male miners with sex. “At first it was just drinking and dancing with the miners but then it was sex.”

In the fishing sector, forced labor trafficking also exposes men to the risk of sexual harassment and violence. Out at sea, off the coasts of New Zealand, Banyu5 was trafficked into slavery on a South Korean fishing boat where he experienced sexual harassment many times from the chief officer on the boat. “I often thought about asking for help but I didn’t know who to ask.''

Two Nepalese women carry heavy loads of firewood on their backs along the mountain road in Upper Mustang, Nepal.

Environmental action to defend and conserve ecosystems and resources

In environment-related activism, GBV is used to violently discourage and stop women from speaking out for their rights, and their communities’ rights, to have and benefit from a safe and healthy environment. In these contexts, Indigenous women face multiple layers of discrimination and violence.

In Guatemala, Itzel6 defends her Indigenous lands and territories from extractive interests, and faces the threat of sexual violence in addition to the threats of murder that other defenders experience. “When they threaten me, they say that they will kill me, but before they kill me, they will rape me. They don’t say that to my male colleagues. These threats are very specific to indigenous women. There is also a very strong racism against us. They refer to us as those rebel Indian women that have nothing to do, and they consider us less human.”

In environmental and conservation organisations, as in many workplaces, patterns of gender-based inequality and discrimination are often surrounded by a culture of acceptance. As noted by the International Labour Organization these situations can create assumptions of impunity that not only reinforces workplace inequalities but  can also increase the likelihood of violence and harassment. In the United States, June,7 who works for a conservation organisation, reflects on the sexual harassment she has experienced: “I’ve thought about reporting it and then I was like, why? He won’t be held accountable for change. It would be on me, and it would be something like, ‘You need to take that less personally.’”

Environmental initiatives, like others, can also unintentionally exacerbate local conditions and contribute to GBV. For example, according to one case reviewed, women dropped out of a project's activities when their husbands beat them over their participation. The activities, many of which had been developed for the women, threatened gender roles and took time away from household chores - conditions that the project had not fully considered.

Gender-sensitive water and sanitation facilities are an important consideration. Depicted is a women’s shower in Vanuatu.

An imperative to act

While issues are vast, they are not insurmountable. Moreover, understanding and addressing GBV-environment linkages are fundamental to realising a rights-based approach. Numerous entry points exist to prevent and respond to these linkages, from addressing policy gaps to strengthening means for justice, to integrating specific attention throughout the project cycle. For the environmental and sustainable development community, focused attention is necessary. For women like Hiba and Tsitsi, violence is not a single occurrence, but entails a lifetime of consequences. In Hiba’s case, the trauma and consequences of her attack have multiplied and extend into many areas of her life. When she discovered that her rape resulted in pregnancy, her family cast her out and her fiancé abandoned her. At eight-months pregnant, the police burst into her hut, arresting her. At the station, under interrogation, she recounted her story. As a result, the police whipped her chest and back and imprisoned her as she was not married and would deliver the baby illegally. For Tsitsi, the village authority continued to pressure her for sex - expecting indefinite sexual exploitation in exchange for land rights. When Tsitsi refused, she was thrown out of the village.

Progress has already begun. Upon reviewing the evidence base, USAID has launched a Global Challenge to address these issues. The Resilient, Inclusive, and Sustainable Environments (RISE) Challenge will fund select organisations to apply innovative and promising interventions to prevent and respond to GBV across programmes that address the access, use, control and management of natural resources. RISE strategies will not only show that action is possible, but also inspire connections and improvements across sectors.

IUCN has taken steps, too, to catalyze action from this research, by raising awareness, building capacities and partnerships, and empowering its members and constituencies. IUCN has curated select reports, toolkits and articles, and will soon launch a GBV-Environment Knowledge Platform. This library aims to create a knowledge base, providing a place to gather strategies, promising practices and a community for transformation. To stay in touch, join a community of practice, and share your own strategies, tools and stories, subscribe for updates.

For more on the RISE Challenge, please click here.

[7]  Real names are replaced for anonymity. June’s story is documented by Jone and Solomon, 2019. Jones, M.S. and Solomon, J. (2019a). ‘Women and rising in the conservation movement, but still face #MeToo challenges’. The Conversation (19 June 2019). Available at: http://theconversation.com/women-are-rising-in-the-conservation-movement-but-still-face-metoo-challenges-117071