Excerpt from the special issue of the CEESP publication Policy Matters, focusing on the stories and voices of environmental defenders; by WoMin African Alliance

The COVID-19 pandemic has presented new layers of strain to the pre-existing burdens faced by women in communities across South Africa (and the continent). Even though the virus knows no boundaries affecting both women and men- women are more at risk because of the role they play in their families and communities. Their livelihoods have been adversely impacted by the lockdown regulations. The situation in local communities is desperate. Women are fighting to protect their lives, dignity, integrity, and tend to their immediate needs to survive. They have been doing so by organising through various ways such as providing food parcels, hand sanitisers, baby clothes and blankets to support vulnerable community members. 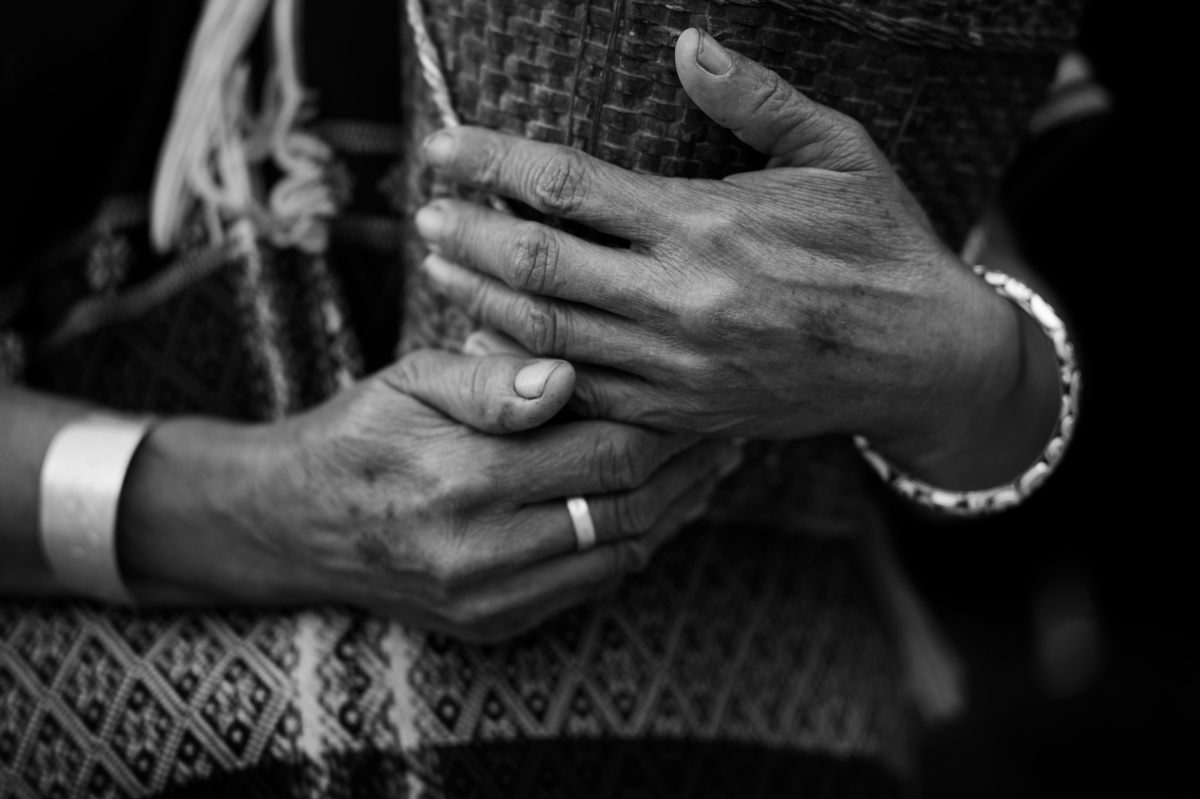 Close up of a woman with a traditional basket

Women in the communities have shared their stories through WhatsApp messages, voice notes, SMS and phone calls. These submissions have been compiled and edited by WoMin African Alliance (Caroline Ntaopane, Lorraine Kakaza and Connie Nagiah) as part of a wider project to amplify the voices of women as they find ways to navigate the complex context.

Photo: Womin
These stories aim to bring to the fore the absence of women’s voices and struggles in mainstream coverage, put pressure on national and local government to respond and act timeously to some of the requests by communities and most importantly provide a platform for women to actively engage and speak in their own voices about their struggles.

The following are a few of the women’s personal accounts that have been collected thus far. More are available in Volume III of Policy Matters 22 - Special Issue on Environmental Defenders:

I was scared and frustrated wondering what tomorrow will look like. We thought the world was coming to an end. This is a sign that we must take care of our nature.  Nature doesn’t need people, but people need nature to survive. All in this crisis may not agree, but it has been created by the capitalist system which forced its way into pushing a rapid economic growth but forget that we are people and we depend on nature. We need to live in harmony with the ecosystem. Government should learn from this crisis and move to putting in measures to curb the spread of the virus but also to start dealing with another crisis that may arise because of climate crisis beyond this pandemic.

The consumption that has been fuelled by capitalism is the one that has led us into this crisis. I was frustrated about the economy of South Africa because it’s already in a mess. Children are missing out on schoolwork because not all parents have smartphones to help their kids with school and data is also expensive. It’s on a women’s life because most of the women are informal traders, they can’t sell now because of the lockdown. For some people it’s hard to even get to town to buy food because we are scared, and of others in the taxis. In the township the price of food is becoming expensive.

Yes, we as women must strengthen our educational workshop through social media and WhatsApp groups. We encourage each other to be hygiene friendly to wash your hands every time and comfort our kids and families that fear these pandemic viruses. That it shall all pass when we work together as a nation. People are facing hunger and poverty- especially hawkers, domestic workers, street vendors and entrepreneurs. I feel like the testing is also moving really slow, Phola is not big but now only few people have been tested.

Imbabala Mine is an underground coal mine which closed for over 10 years, it was left rehabilitated posing a lot of danger to surrounding communities. Since then young
men in the communities used it for generating income because of being unemployed, through illegal mining activities which has taken a number of lives. They have been digging coal and selling in the communities. This has been very dangerous because as they were digging, they were also breaking the supporting pillar which led into rocks falling and claiming lives. Also a number of women have been going there to collect coal for cooking and heating.

Khuthala Environmental Care Group had a number of meetings with the Department of Mineral Resource and Energy (DMRE) discussing proper rehabilitation of the area so that it can be used for houses and agricultural purposes. Repeatedly communities and people who have lost family members and those whose houses cracked during the operation engaged with DMRE about the high risks and dangers that they are facing daily because of the mine. DMRE promised urgent action to rehabilitate but nothing is happening so far.

Now to our surprise there is a new mining company claiming to be holding a prospecting right which they obtained since 2017. The name of the new company is called Amatala Mining Service. We are confused by DRME lies because we are trying to rehabilitate and on the other side, they are giving prospecting rights to further destructions considering that Imbabala is situated right to an informal settlement called Nomzamo. The negative impact of that will further be caused if the mine opens again are few, there is already an existing mine that is causing houses to crack. When Mbabala was still operational there were also houses that were cracked, and it left without compensating owners.

Nomzamo has about 600 households, Steve Biko about 500 and Inkanyezi has 800 households. Now they want to start prospecting and if the mines commence it will impact 2,000 households because they will need to relocate to another place. This will also add negatively to climate change, air and water pollution. Already some of the mine are struggling for water and communities. We are also concerned about water contamination because this mine is also situated next to the stream that is used by communities for water access. There is also a school close to the areas, the school cracked already because of the previous mining activities.

This is our immediate concern that mining companies should not use this lockdown and prevent people to not to participate in decisions affecting their lives. The mining companies are benefiting, not us. As we speak many workers have been retrenched increasing the high rate of unemployment- now who’s going to benefit? The place is also a protected area, it was not even meant to be mined in the first place.