The work of the Intergovernmental Science-Policy Platform on Biodiversity and Ecosystem Services (IPBES) has direct relevance to CEESP at many different levels and offers some direct ways for CEESP members to engage.

In March, 2018, I attended the IPBES-6 Plenary in Medellin, Columbia, as a representative of CEESP and participated as a member of the IUCN delegation, alongside the Secretariat and Commission members from SSC and CEM.  I also attended meetings of the Indigenous Caucus and the Stakeholder Day. 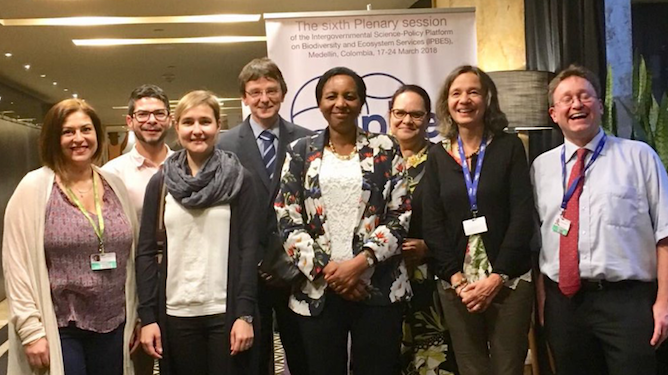 The work of IPBES has direct relevance to CEESP at many different levels.  IPBES has made clear that inclusion of indigenous and local knowledge in ecosystem assessments is essential. In the IPBES conceptual framework there is also explicit recognition of multiple values of nature and of valuing nature and in utilising a multidisciplinary approach to all aspects of its work. Of the various international processes, to my mind, IPBES stands out as the process that is really pushing the understanding of what ‘good science’ means in 2018 through actions. CEESP’s two knowledge baskets, the Natural Resources Governance Framework and People in Nature have direct relevance to IPBES and vice versa.

This 6th meeting of IPBES set the ambitious task of approving four regional and sub-regional assessments of biodiversity and ecosystem services for Africa, Asia and the Pacific, the Americas, and Europe and Central Asia, as well as a global thematic assessment on Land degradation and restoration. Of particular interest to me was the degree to which indigenous and local knowledge was accessed and incorporated into the IPBES assessments, as well as the willingness for the authors to embrace multiples values of nature and valuing nature.

In my experience, it is surprising what issues become controversial at IPBES meetings. For example, at the IPBES-4 meeting in Kuala Lumpur in February 2016, some delegations objected to the use of the word ‘biocultural’ in the IPBES assessment on Pollinators. The reasoning given by objecting states was that biocultural was ‘new’ knowledge. They argued that member states had agreed that IPBES assessments had to be based on current existing knowledge. No amount of reasoning or providing bibliographic references to published peer reviewed papers on biocultural heritage/conservation could alter the objection. As a result, all references to biocultural were either deleted or bracketed in that report.

The contentious issue at IPBES-6 was the use of the term ‘nature’s benefits to people’, with some arguing that this term was being used to replace ‘ecosystem services’.  As explained in the IPBES-4 report, “Nature’s benefits to people” refers to all the benefits that humanity obtains from nature. Ecosystem goods and services are included in this category. Within other knowledge systems, nature’s gifts and similar concepts refer to the benefits of nature from which people derive a good quality of life. The notion of nature’s benefits to people includes the detrimental as well as the beneficial effects of nature on the achievement of a good quality of life by different people and in different contexts. Trade-offs between the beneficial and detrimental effects of organisms and ecosystems are not unusual and they need to be understood within the context of the bundles of multiple effects provided by a given ecosystem within specific contexts. In spite of some States threatening to not approve assessments using this term, all assessments were subsequently approved using both nature’s benefits as well as nature’s contributions to people.

Ten years after the UN General Assembly adopted the UN Declaration on the Rights of Indigenous Peoples, meetings throughout the UN systems are still troubled with objections by some states to the term “indigenous peoples’.  At IPBES-6, France insisted the term peoples not be used and held out until the very end of the meeting when it was clear they were on their own before reluctantly conceding. As was rightly pointed out, this particular discussion should have been put to rest with the UNGA adoption of the Declaration.

Ways for CEESP members to engage:  IPBES has issued a call for nominations for experts (authors) to work on two new areas. These are (1) the undertaking of a methodological assessment regarding the diverse conceptualization of multiple values of nature and its benefits, hereafter referred to as “the assessment on values”, (2) the undertaking of a thematic assessment of the sustainable use of wild species. The Call for nominations closes 1 June 2018.  (There will be a separate call for nominations of experts for the assessment of invasive alien species, later this year.) IPBES is seeking experts in indigenous and local knowledge, science/policy interface, multidisciplinary research and diverse values of nature.  The next IPBES Plenary will be 29 April – 4 May 2019 in Paris.

To find out more about the IPBES work programme and the call for nominations process refer to: https://www.ipbes.net/about