A nexus assessment of the 3S river basins: initial results and feedback

Over the last 18 months, IUCN, ICEM, and IWMI have been preparing a water-food-energy-environment (WFEE) nexus assessment of the Srepok, Sesan, and Sekong (3S) River Basins in Cambodia, Lao PDR, and Vietnam on behalf of the US State Department’s Nexus Futures Program and SDC’s Building River Dialogues and Governance (BRIDGE) Program.  The 3S are the largest tributaries of the Mekong. 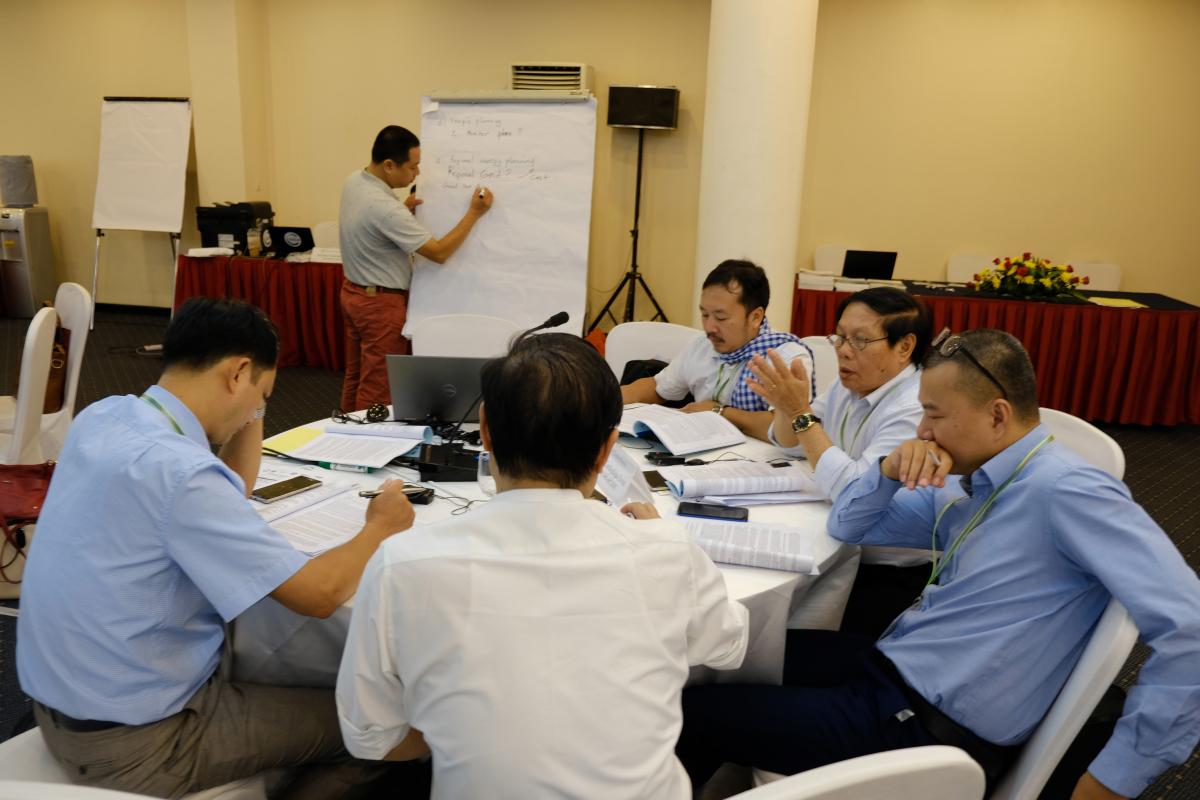 Photo: Participants were discussing in the meeting © IUCN Viet Nam

The draft report was presented at a workshop in Phnom Penh on November 19-20, 2018 with members of a regional Technical Advisory Group (TAG).  This was the fourth time that the TAG had met since the start of the project.  The workshop was opened by officials from the US Embassy in Bangkok and SDC in Phnom Penh.

The assessment took longer than expected for two reasons.  One was the rapid changes in context, particularly the emergence of affordable non-hydro renewable energy generation technologies, and changes in regional power supply and demand that have called into question the viability of some large hydropower projects.  The other was the need to focus the assessment on nexus solutions rather than on traditional conservation measures such as improved protected area management.

What is the nexus?  Adapting the FAO definition, the WFEE nexus is about understanding and managing often-competing interests while ensuring the integrity of ecosystems.  By brokering trade-offs, synergies and/or compromises between competing sectors, the nexus facilitates the identification of non-traditional pathways toward traditional sectoral objectives, while encouraging a “problemshed” (i.e., solutions may lie outside the river basin and have nothing to do with water per se) rather than a watershed perspective.

A nexus solution relevant to the 3S would be the installation of a hydrometeorological monitoring system upstream of a hydro-dam cascade that allows the operators to operate their dams at less than full supply level thereby reducing the risk of catastrophic flooding without compromising power generation.  Another might be agribusiness investments in soil stabilizing industrial crops that protect watersheds while introducing opportunities for value addition and diversified livelihoods both on and off-farm.  A third would be the use of paddy fields to attenuate floods as an alternative to expensive flood control infrastructure.

Nexus solutions can involve investments in both built and natural infrastructure.

The study followed a structured approach.  First, over 50 plans and policies for Cambodia, Lao PDR, and Vietnam were reviewed and objectives and targets related to WFEE extracted.  These were then assessed in terms of possible threats that an objective for one sector might impose on another sector’s objectives; we call these threats “Red Flags”.  Using an exhaustive set of sector studies that ICEM and IWMI completed as inputs to the assessment, these threats were articulated as nine generic threats.  Finally, a structured analysis identified potential nexus solutions for each combination of sector, objective and threat.  The result is summarized in the table, which ranks these solutions by threat and the number of ways that the solution can be applied. 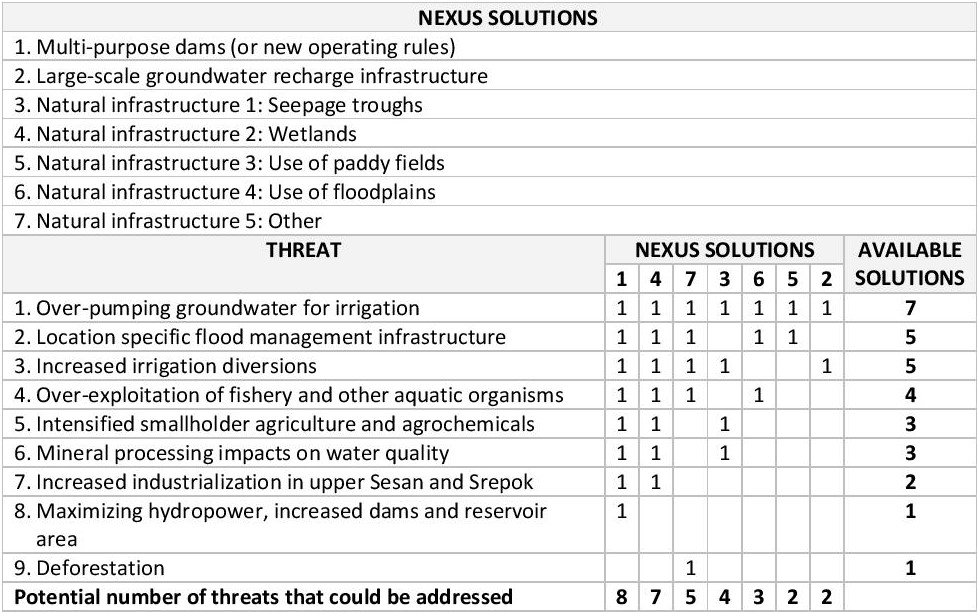 What is striking is that while multi-purpose dams have the potential to generate the greatest benefits, five of the seven nexus solutions are natural infrastructure or nature-based solutions.

Phil Riddell, who drafted the nexus study and who spent four years working on water resources management in the Central Highlands in the 1990s, observed that as competition intensifies both for water resources and the funding needed to develop them, multi-sector nexus solutions have the potential to establish win-win outcomes while single sector solutions are more likely to result in conflict.

TAG members provided a lot of feedback.  A recurring question was the difference between the economic efficiency of a project vs. the river basin.  Nearly all dams in the 3S are designed and operated to maximize power production.  This maximizes plant profitability but imposes downstream costs in terms of rapid variations in river level, reduced dry season flow, etc.  A dam that also managed floods, provided water for irrigation and maintained environmental streamflows would provide multiple economic benefits across the river basin.

TAG members also asked about how a nexus approach would work politically.  It has certainly been picked up faster in Africa than in Asia.  One reason is that there appears to be more scope for institutional innovation in Africa.  For example, because irrigation is typically the largest water using sector and where ministerial self-interest dominates, in several countries responsibility over irrigation is being transferred from the relevant line ministry to non-line ministries or even the president’s office.

Another reason why the nexus has made more headway in Africa is the presence of regional organizations such as SADC in Southern Africa and OMVS in West Africa that actively promote a nexus approach to planning and investment that optimizes regional projects for national and local benefits.  No such organization exists in the Mekong region; neither the MRC nor ASEAN has the mandate or technical capacity to lead nexus negotiations.

The revised nexus assessment report will be released in early December 2018.