On 5 September 2019, IUCN Asia led a thematic dialogue on Nature-based Solutions (NbS) for ocean ecosystems and water resources during the Asia-Pacific Climate Week. 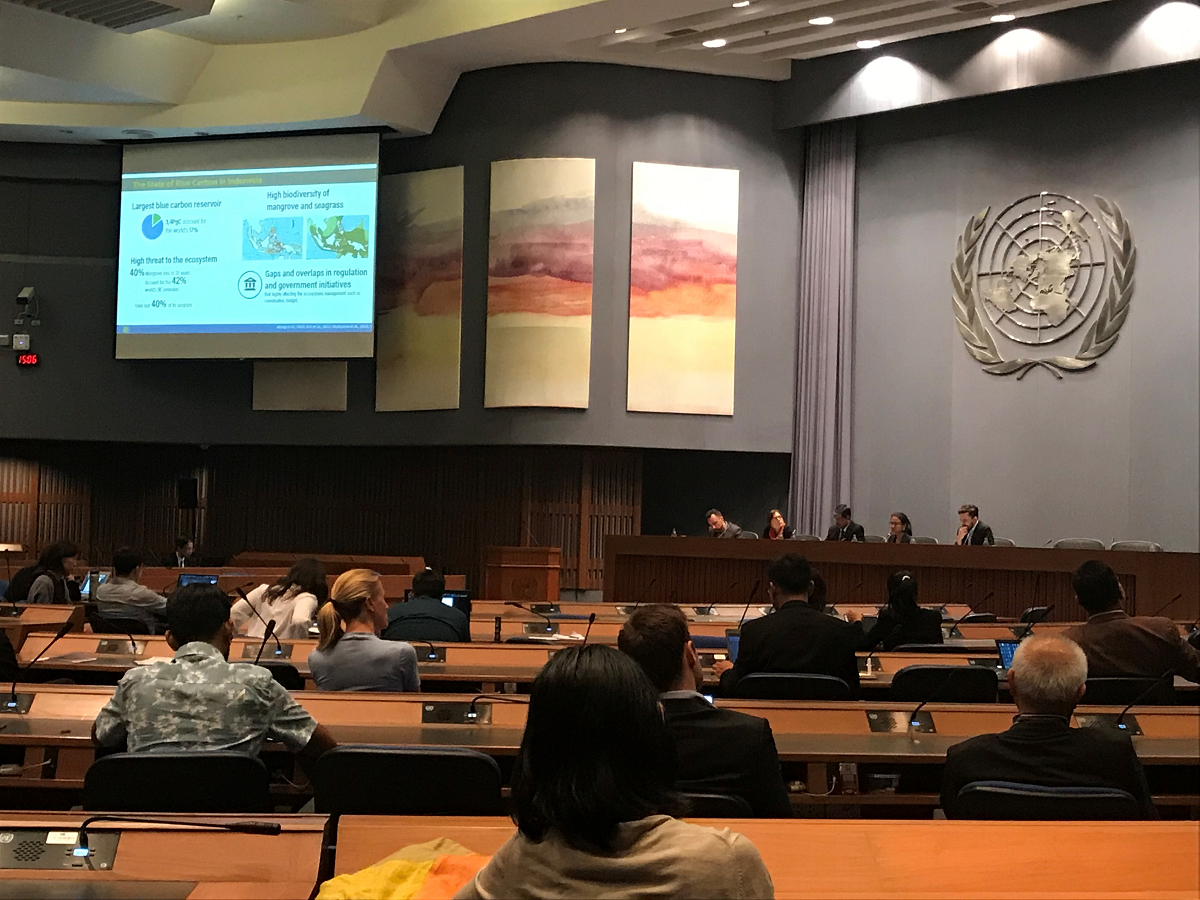 Held at the UN Convention Centre in Bangkok, Thailand, the event was attended by approximately 120 representatives of government agencies, intergovernmental organisations, NGOs and academic institutions.

The dialogue reaffirmed the need for a global standard to quantify and define NbS, and reiterated the need for improved specificity of NbS targets within the Nationally-Determined Contributions (NDCs). The event also identified some gaps: international organisations could better support national governments with their NbS strategies, and there could be more robust scientific data to support the integration of NbS within climate change policy frameworks.

These recommendations will be included in a report to contribute to discussions at the UN Climate Action Summit on 23 September 2019 in New York. The summit aims to boost ambition and accelerate actions to implement the Paris Agreement on Climate Change.

“We can unlock nature’s full potential by enhancing international and regional cooperation on NbS, especially where there are synergies with other issues, and particularly with a view to delivering the SDGs.  Maintaining high environmental integrity is really important in this area,” said James Anderson, Deputy Head of Mission at the New Zealand Embassy in Bangkok, in his opening remarks.

At the dialogue, IUCN presented the draft IUCN Global Standard for Nature-based Solutions -   a recently developed tool, which aims to create a common understanding about NbS amongst practitioners. It was introduced together with supporting case studies on agriculture, forests and oceans from the United Nations Environment Programme (UNEP), the Food and Agriculture Organization (FAO) and the World Resources Institute (WRI) Indonesia.

“Global standards are critical as they help to inform the planning, design and implementation of a NbS. They also help determine whether, and to what degree, an intervention can be considered a NbS. Additionally, global standards allow practitioners to assess the efficiency, effectiveness, affordability and sustainability of the NbS.”, said Raphaël Glémet, Senior Programme Officer, IUCN Water and Wetlands during his presentation of the draft IUCN Global Standard for Nature-based Solutions.

Applications of NbS include its use in protecting food systems and preventing negative environmental impacts such as soil degradation and pollutant runoff. These applications were presented by Beau Damen of FAO Asia. Ines Ayostina, from the World Resources Institute Indonesia also suggested integrating Indonesia’s blue carbon reservoir from mangroves and seagrass in its NDCs to strengthen NbS implementation in the country.

Other presentations at the event included an introduction to the Nature-Based Solution Coalition, by Mozaharul Alam, Regional Coordinator for the Climate Change Programme of UN Environment. Supported by the UN Environment Programme, with New Zealand and China as lead countries, the Coalition has three focus areas: forests and other terrestrial ecosystems, ocean ecosystems and water, and agriculture food systems. By mainstreaming NbS into governance and economic planning, the Coalition aims to increase resources for investments in nature, thereby benefitting biodiversity and local communities.

Some examples of NbS interventions were also presented. For example, Nina Raasakka, Programme Officer from UN Environment, talked about the Chulalongkorn University Centenary Park in Bangkok. The park, an example of a Sponge City Initiative, is designed to collect and treat water and decrease flood risks.

IUCN encourages organisations and individuals to participate in the global NbS standards’ online public consultation and submit case studies to feed into the standard’s design. The consultation is open until 14 October 2019.

The IUCN Global Nature-based Solutions Standard will be launched at the IUCN World Conservation Congress 2020 in Marseille, France in June 2020.