Every day, 5,500 tourists on average take cruises through the spectacular landscape of Ha Long Bay. Rising from the sparkling green waters, steep, densely forested karst hills never fail to impress. These days, however, the waters aren’t so sparkling and visitors are becoming less inclined to revisit an area plagued by pollution. In response, IUCN and Marine Conservation and Development (MCD), a local NGO and IUCN member, have established the Ha Long-Cat Ba Alliance (HLCBA), a partnership of government, business, and grassroots organizations. Funded by the U.S. Agency for International Development (USAID), the Alliance supports multi-stakeholder initiatives and innovative governance arrangements to improve water quality in Ha Long and Cat Ba. 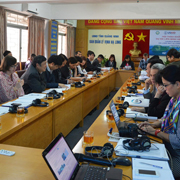 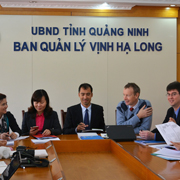 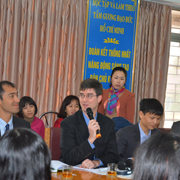 When Ha Long Bay was nominated as a World Heritage Site (WHS) in 1994, IUCN recommended that it include parts of the Cat Ba Archipelago. Both areas share the same coastal and marine ecosystem, making collaborative management crucial. With that in mind, the project, originally called the Ha Long Bay Alliance, has been renamed the Ha Long-Cat Ba Alliance.

The Alliance was launched at a workshop organized by IUCN, MCD, USAID, and the Ha Long Bay Management Department in Ha Long City on January 20. Attended by several local NGOs and provincial departments of agriculture, environment, transport and tourism, the workshop was an opportunity to talk openly about the environmental problems facing the bay.

An independent 2013 study organized by IUCN found that coal mines, limestone quarries, roads, and ports around the bay have put in place measures to significantly reduce runoff of polluted water. In addition, the provincial government has taken decisive action in removing several hundred households that had encroached into the core zone of the WHS. As a result of these improvements, the evaluation concluded that waste from the hundreds of tourist boats is the primary source of water pollution in the bay.

This is confirmed by a recent IUCN-supported situation analysis carried out by the Asian Management Development Institute (AMDI), a local NGO and Alliance partner. The study found that not only do most boats dispose of untreated waste water directly into the bay, but even boats with waste water treatment systems rarely use them. Controlling pollution from these boats is challenging because they are so widely dispersed. The government can issue regulations but without strict enforcement there is no guarantee that they will be respected.

As part of the Alliance, IUCN is engaging the largest companies that together own over half the boats in the bay. Feedback shows that although these companies are keen to invest in advanced pollution control technology, they are hesitant to make major investments when they feel there is an "unpredictable and non-transparent policy environment." Companies need the government to establish and enforce regulations that will oblige all boats to install and operate waste water treatment systems. Without this assurance, companies don't believe that the investments they make will have any effect on reducing water pollution.

Stricter environmental regulation would have clear economic benefits. A quick glance at TripAdvisor, which receives several reviews of the bay each day, shows that while most visitors are impressed with its natural beauty, many are put off by the visibly dirty water and solid waste. Unless water pollution is reduced, the bay could get the reputation as a place to avoid, which would not only threaten the tourism companies, but also the US$10 million in entrance fees it generated in 2014.

If companies and government can cooperate to reduce pollution and improve visitor experience, tourists are likely to spend more time and more money in the area. TripAdvisor feedback recommends 3-day/2-night cruises that take visitors into the remoter and cleaner parts of the bay. Reviews are also much more favorable for companies that have invested in better quality boats and tours. The consensus is that tourists will pay more money for a high quality tour. A shift to quality over quantity has the potential to increase revenue, reduce pollution, and improve the bay’s international reputation.