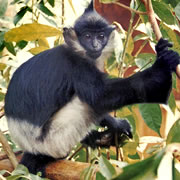 Mankind’s closest living relatives – the world’s apes, monkeys, lemurs and other primates – are under unprecedented threat from destruction of tropical forests, illegal wildlife trade and commercial bushmeat hunting, with 29 percent of all species in danger of going extinct, according to a new report by the Primate Specialist Group of IUCN’s Species Survival Commission (SSC) and the International Primatological Society (IPS), in collaboration with Conservation International (CI).

Titled Primates in Peril: The World’s 25 Most Endangered Primates—2006–2008, the report compiled by 60 experts from 21 countries warns that failure to respond to the mounting threats now exacerbated by climate change will bring the first primate extinctions in more than a century. Overall, 114 of the world’s 394 primate species are classified as threatened with extinction on the IUCN Red List.

Hunters kill primates for food and to sell the meat; traders capture them for live sale; and loggers, farmers, and land developers destroy their habitat. One species, Miss Waldron’s red colobus of Ivory Coast and Ghana, is already feared extinct, while the golden-headed langur of Vietnam and China’s Hainan gibbon number only in the dozens. The Horton Plains slender loris of Sri Lanka has been sighted just four times since 1937.

“You could fit all the surviving members of these 25 species in a single football stadium; that’s how few of them remain on Earth today,” said Chairman of the IUCN/SSC Primate Specialist Group Russell A. Mittermeier, who is also President of CI. “The situation is worst in Asia, where tropical forest destruction and the hunting and trading of monkeys puts many species at terrible risk. Even newly discovered species are severely threatened from loss of habitat and could soon disappear.”

As “flagship species” and our closest living relatives, nonhuman primates are important to the health of their surrounding ecosystems. Through the dispersal of seeds and other interactions with their environments, primates help support a wide range of plant and animal life that makes up the Earth’s forests.

The World’s 25 Most Endangered Primates list, compiled at the 21st Congress of the International Primatological Society in Entebbe, Uganda, follows similar assessments in 2000, 2002 and 2004. Eight of the primates on the latest list, including the Sumatran orangutan of Indonesia and the Cross River gorilla of Cameroon and Nigeria, are “four-time losers” that also appeared on the previous three lists. Six other species are on the list for the first time, including a recently discovered Indonesian tarsier that has yet to be formally named.

Madagascar and Vietnam each have four primates on the new list, while Indonesia has three, followed by Sri Lanka, Tanzania, Ivory Coast, Ghana and Colombia with two each, and one each from China, Cameroon, Equatorial Guinea, Kenya, Nigeria, Myanmar, Bangladesh, India, Peru, Venezuela and Ecuador. Some primates on the list are found in more than one country.

By region, the list includes 11 species from Asia, seven from Africa, four from Madagascar, and three from South America, showing that non-human primates are threatened wherever they live.

All 25 primates on the 2006–2008 list are found in the world’s biodiversity hotspots—34 high priority regions identified by Conservation International that cover just 2.3 percent of the Earth’s land surface but harbor well over 50 percent of all terrestrial plant and animal diversity. Eight of the hotspots are considered the highest priorities for the survival of the most endangered primates: Indo-Burma, Madagascar and the Indian Ocean Islands, Sundaland, Eastern Afromontane, Coastal Forests of Eastern Africa, Guinean Forests of West Africa, the Atlantic Forest of Brazil, and Western Ghats-Sri Lanka.

Habitat loss due to the clearing of tropical forests for agriculture, logging, and the collection of fuel wood continues to be the major factor in the declining number of primates, according to the report. Tropical deforestation also emits 20 percent of total greenhouse gases that cause climate change, which is more than all the world’s cars, trucks, trains and airplanes combined. In addition, climate change is altering the habitats of many species, leaving those with small ranges even more vulnerable to extinction.

“By protecting the world’s remaining tropical forests, we save primates and other endangered species while preventing more carbon dioxide from entering the atmosphere to warm the climate,” Russell Mittermeier noted.

Hunting for subsistence and commercial purposes is another major threat to primates, especially in Africa and Asia. Live capture for the pet trade also poses a serious threat, particularly to Asian species.

The 2006-2008 list focuses on the severity of the overall threat rather than mere numbers. Some on the list, such as the Sumatran orangutan, still number in the low thousands but are disappearing at a faster rate than other primates. Others were discovered only in recent years, and their low numbers and limited range make them particularly vulnerable to habitat destruction and other threats.

For the complete report and photos or illustrations of species, contact:

The World’s 25 Most Endangered Primates, and the countries where they are found: