One third of reef-building corals around the world are threatened with extinction, according to the first-ever comprehensive global assessment to determine their conservation status. The study findings were published today by Science Express. 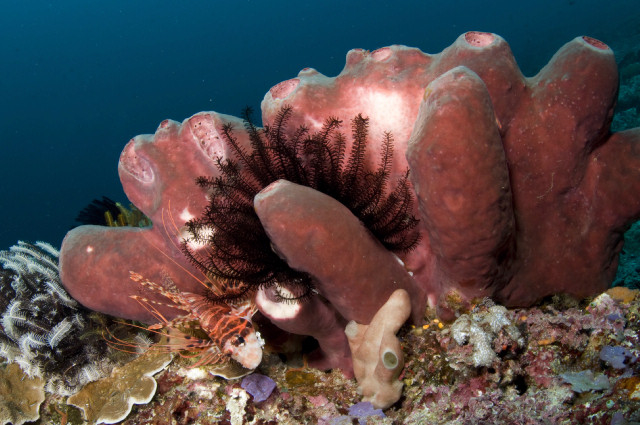 Leading coral experts joined forces with the Global Marine Species Assessment (GMSA) – a joint initiative of the International Union for Conservation of Nature (IUCN) and Conservation International (CI) – to apply the IUCN Red List Categories and Criteria to this important group of marine species.

“The results of this study are very disconcerting,” stated Kent Carpenter, lead author of the Science article, GMSA Director, IUCN Species Programme. “When corals die off, so do the other plants and animals that depend on coral reefs for food and shelter, and this can lead to the collapse of entire ecosystems.”

Built over millions of years, coral reefs are home to more than 25 percent of marine species, making them the most biologically diverse of marine ecosystems. Corals produce reefs in shallow tropical and sub-tropical seas and have been shown to be highly sensitive to changes in their environment.

Shallow water corals have a symbiotic relationship with algae called zooxanthellae, which live in their soft tissues and provide the coral with essential nutrients and energy from photosynthesis and are the reason why corals have such beautiful colors. Coral bleaching is the result of a stress response, such as increased water temperatures, whereby the algae are expelled from the tissues, hence the term “bleaching.” Corals that have been bleached are weaker and more prone to attack from disease. Scientists believe that increased coral disease also is linked to higher sea temperatures and an increase in run-off pollution and sediments from the land.

Researchers predict that ocean acidification will be another serious threat facing coral reefs. As oceans absorb increasing amounts of carbon dioxide from the atmosphere, water acidity increases and pH decreases, severely impacting corals’ ability to build their skeletons that form the foundation of reefs.

The 39 scientists who co-authored this study agree that if rising sea surface temperatures continue to cause increased frequency of bleaching and disease events, many corals may not have enough time to replenish themselves and this could lead to extinctions.

“These results show that as a group, reef-building corals are more at risk of extinction than all terrestrial groups, apart from amphibians, and are the most vulnerable to the effects of climate change,” said Roger McManus, CI’s vice president for marine programs. “The loss of the corals will have profound implications for millions of people who depend on coral reefs for their livelihoods.”

Staghorn (Acroporid) corals face the highest risk of extinction, with 52 percent of species listed in a threatened category. The Caribbean region has the highest number of highly threatened corals (Endangered and Critically Endangered), including the iconic elkhorn coral (Acropora palmata) which is listed as Critically Endangered. The high biodiversity “Coral Triangle” in the western Pacific’s Indo-Malay-Philippine Archipelago has the highest proportions of Vulnerable and Near-Threatened species in the Indo-Pacific, largely resulting from the high concentration of people living in many parts of the region.

Corals from the genera Favia and Porites were found to be the least threatened due to their relatively higher resistance to bleaching and disease. In addition, 141 species lacked sufficient information to be fully assessed and were therefore listed as Data Deficient. However, researchers believe that many of these species would have been listed as threatened if more information were available.

The results emphasize the widespread plight of coral reefs and the urgent need to enact conservation measures. “We either reduce our CO2 emission now or many corals will be lost forever,” says Julia Marton-Lefèvre, IUCN Director General. “Improving water quality, global education and the adequate funding of local conservation practices also are essential to protect the foundation of beautiful and valuable coral reef ecosystems.”

The reef-building corals assessment is one group of a number of strategic global assessments of marine species the GMSA has been conducting since 2006 at Old Dominion University in Norfolk, Virginia. Other assessments are being conducted on seagrasses and mangroves that are also important habitat-forming species, all marine fishes, and other important keystone invertebrates. By 2012, the GMSA plans to complete its comprehensive first stage assessment of the threat of extinction for over 20,000 marine plants and animals, providing an essential baseline for conservation plans around the world, and tracking the extinction risk of marine species.

The results of the coral species assessment will be placed on the IUCN Red List of Threatened Species in October 2008. Currently, the assessments can be found at
http://www.sci.odu.edu/gmsa/about/corals.shtml

Conservation International (CI) applies innovations in science, economics, policy and community participation to protect the Earth’s richest regions of plant and animal diversity and demonstrate that human societies can live harmoniously with nature. Founded in 1987, CI works in more than 40 countries on four continents to help people find economic alternatives without harming their natural environments. For more information about CI, visit www.conservation.org.

The International Union for the Conservation of Nature (IUCN) helps the world find pragmatic solutions to our most pressing environment and development challenges by supporting scientific research; managing field projects all over the world; and bringing governments, NGOs, the UN, international conventions and companies together to develop policy, laws and best practice.

IUCN is the world’s oldest and largest global environmental network. IUCN is a democratic union with more than 1,000 government and NGO member organizations, and some 10,000 volunteer scientists in more than 150 countries. IUCN’s work is supported by 1,100 professional staff in 62 countries and hundreds of partners in public, NGO and private sectors around the world. www.iucn.org.

The IUCN Species Programme supports the activities of the IUCN Species Survival Commission and individual Specialist Groups, as well as implementing global species conservation initiatives. It is an integral part of the IUCN Secretariat and is managed from IUCN’s international headquarters in Gland, Switzerland. The Species Programme includes a number of technical units covering Species Trade and Use, Red List, Freshwater Biodiversity Assessment, (all located in Cambridge, UK), and the Global Biodiversity Assessment Initiative (located in Washington DC, USA). www.iucn.org/species

The Global Marine Species Assessment (GMSA) began in late 2005 and is based in the Department of Biological Sciences at Old Dominion University in Norfolk, Virginia. This project will be the first global review of the conservation status of every marine vertebrate species, and of selected invertebrates and plants. The project involves a range of partners in compiling and analyzing all existing data on approximately 20,000 marine species, and will determine the risk of extinction according to the IUCN Red List Categories and Criteria. http://www.sci.odu.edu/gmsa/