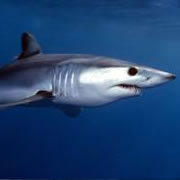 More oceanic or “pelagic” sharks are being added to the IUCN Red List of Threatened Species based on the findings of this week’s international expert workshop, convened by the IUCN Species Survival Commission (SSC), that examined the conservation status of these highly migratory sharks against Red List criteria.

“The qualities of pelagic sharks – fast, powerful, wide ranging – too often lead to a misperception that they are resilient to fishing pressure,” said Sarah Fowler, Co-Chair of the IUCN SSC Shark Specialist Group (SSG). “This week, leading shark scientists from around the world highlighted the vulnerability of these species to overfishing and concluded that several species are now Threatened with extinction on a global scale.”

All three species of thresher sharks, known for scythe-like tails that can be as long as their bodies - were listed as Vulnerable globally. The bigeye and pelagic thresher sharks were assessed for the first time, while the “common” thresher was uplisted from the Data Deficient classification made in 2001.

The global threat status was heightened for shortfin mako, a favorite shark among commercial and recreational fishermen, from Near Threatened in 2000 to Vulnerable today.

The blue shark, the world’s most abundant and heavily fished pelagic shark, stayed in the threat category Near Threatened.  Scientists noted declines of 50-70% in the North Atlantic and concern over the lack of conservation measures, but could not reach consensus that the species is Threatened with extinction on a global scale.

Workshop participants focused on assessing the global status of pelagic and semi-pelagic sharks and rays against the IUCN Red List Criteria, ranging from Extinct to Least Concern. Species qualifying as Vulnerable, Endangered or Critically Endangered are considered Threatened with extinction. Species close to qualifying for Threatened status in the near future are deemed Near Threatened while those suffering from lack of information are flagged as Data Deficient. (For a complete list of the IUCN Red List Criteria see Notes to Editors.)

Pelagic sharks are taken incidentally in high seas tuna and swordfish fisheries, and increasingly targeted as new markets for their meat develop and demand for their valuable fins grows.  Bans on shark “finning” – slicing off a shark’s valuable fins -- have been adopted for most international waters, but lenient standards and lacking enforcement hamper their effectiveness.

“Despite mounting threats and evidence of decline, there are no international catch limits for pelagic sharks,” said Sonja Fordham, Deputy Chair of the SSG and Policy Director for the Shark Alliance.  “The workshop results underscore the urgent need for international fishery commissions to limit fishing for these vulnerable species and strengthen regulations on the wasteful practice of finning.”

Sharks in general are especially susceptible to overfishing because most species grow slowly, mature late, and produce few young.  Whereas some pelagic sharks, such as the blue shark, have dozens rather than the usual handful of pups, they still have low reproductive rates when compared to most other fish species.

The pelagic porbeagle shark was declared globally Threatened in a 2005 assessment.  The European Union has proposed listing the porbeagle under the United Nations Convention on International Trade in Endangered Species (CITES).

“Of particular concern are the porbeagle and mako sharks in the Mediterranean,” warned Alen Soldo of the University of Split in Croatia, a pelagic shark expert who participated in the meeting. “Our studies reveal fishing pressure well beyond the reproductive capacity of the species and have led to Critically Endangered classifications for this region.”

The status of scalloped hammerhead shark was heightened from Near Threatened to Endangered. Hammerhead sharks are among the species most likely to be finned as their fins are highly prized for the Asian delicacy, shark fin soup.

The pelagic stingray, now listed as Least Concern, contained the workshop’s only good news of apparently stable, if not increasing trends. Scientists, however, noted that this apparent rise might be due to newly found populations of pelagic stingrays rather than real population increase. As oceanic fishing effort intensifies in areas where these rays are common, scientists warned that this species might have to be uplisted into a threatened category if they continue to be captured and discarded dead. Their status must be monitored carefully.

The IUCN Red List of Threatened Species is the world's most authoritative guide to the status of biological diversity.  The workshop was one in long series convened by the IUCN Shark Specialist Group as part of a process to assess all 1,200 species of sharks, skates, rays, and chimaeras by the end of 2007.

Photos are available from: carolin.wahnbaeck@iucn.org

The IUCN Red List threat categories are the following, in descending order of threat:

The World Conservation Union is the world’s largest conservation network. The Union brings together 82 States, 111 government agencies, more than 800 non-governmental organizations (NGOs), and some 10,000 scientists and experts from 181 countries in a unique worldwide partnership.

The Union’s mission is to influence, encourage and assist societies throughout the world to conserve the integrity and diversity of nature and to ensure that any use of natural resources is equitable and ecologically sustainable. The World Conservation Union is a multicultural, multilingual organisation with 1000 staff located in 62 countries. Its headquarters are in Gland, Switzerland. www.iucn.org

The IUCN Red List is widely recognized as the most comprehensive source of information on the global conservation status of plant and animal species and, in the context of the Shark Specialist Group, can be used as a tool for measuring and monitoring changes in the status of chondrichthyan (sharks, rays and chimaeras) biodiversity and our knowledge of the taxa. Red Lists are among the most widely used tools available to conservationists worldwide for focusing attention on species of conservation concern. They are an essential basis to enable management priorities to be targeted and for monitoring the long-term success of management and conservation initiatives. The assessments evaluate the conservation status of individual species, identify threatening processes affecting them and, if necessary, propose recovery objectives for their populations. Red list

The Shark Specialist Group (SSG) of IUCN’s Species Survival Commission aims to promote the long-term conservation of the world’s chondrichthyan fishes, effective management of their fisheries and habitats and, where necessary, the recovery of their populations. One of the roles central to the SSG’s mission is the preparation of species assessments for the IUCN Red List of Threatened Species TM.

The SSG is currently part way through a programme to complete assessments of all chondrichthyan species (>1,100 worldwide) by the end of 2007. This is being undertaken through a series of regional workshops to facilitate detailed discussions and pooling of resources. To date, workshops have been held for Australia & Oceania, sub-equatorial Africa, South America, the Mediterranean, and North & Central America. There have also been two workshops for Batoids (skates and rays) and deep sea species. As a result, approximately 550 chondrichthyan assesments have been submitted to the Red List, with another 320 in preparation. www.flmnh.ufl.edu/fish/organizations/ssg/ssg.htm

The Shark Alliance is a not-for-profit coalition of non-governmental organizations dedicated to restoring and conserving shark populations by improving European fishing policy.  Because of the influence of Europe in global fisheries and the importance of sharks in ocean ecosystems, these efforts have the potential to enhance the health of the marine environment in Europe and around the world.
The mission of the Shark Alliance is two-fold: