More than one in six mangrove species worldwide are in danger of extinction due to coastal development and other factors, including climate change, logging and agriculture, according to the first-ever global assessment on the conservation status of mangroves for the IUCN Red List of Threatened Species™. 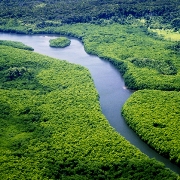 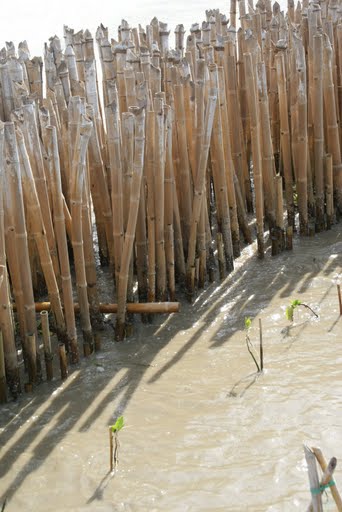 As a result, 11 out of 70 mangrove species (16 percent) which were assessed will be placed on the IUCN Red List. The Atlantic and Pacific coasts of Central America, where as many as 40 percent of mangrove species are considered threatened, are particularly affected.

Mangroves are vital to coastal communities as they protect them from damage caused by tsunami waves, erosion and storms, and serve as a nursery for fish and other species that support coastal livelihoods. In addition, they have a staggering ability to sequester carbon from the atmosphere, and serve as both a source and repository for nutrients and sediments for other inshore marine habitats, such as seagrass beds and coral reefs.

The study appears in the scientific journal PLoS ONE. It was carried out by the Global Marine Species Assessment Unit (GMSA), which is part of the Biodiversity Assessment Unit, a joint initiative of IUCN and Conservation International, together with the world’s leading mangrove experts.

“The potential loss of these species is a symptom of widespread destruction and exploitation of mangrove forests,” says Beth Polidoro, Research Associate of the GMSA at Old Dominion University and principal author of the study. “Mangroves form one of the most important tropical habitats that support many species, and their loss can affect marine and terrestrial biodiversity much more widely.”

Mangrove forests grow where saltwater meets the shore in tropical and subtropical regions, thus serving as an interface between terrestrial, fresh-water and marine ecosystems. These forests provide at least US$1.6 billion each year in ecosystem services.

Urgent protection is needed for two mangrove species that are listed as Critically Endangered, the highest probability of extinction measured by the IUCN Red List, Sonneratia griffithii and Bruguiera hainesii.

Sonneratia griffithii is found in India and Southeast Asia, where 80 percent of all mangrove area has been lost over the past 60 years. Bruguiera hainesii is an even rarer species and grows only in a few fragmented locations in Indonesia, Malaysia, Thailand, Myanmar, Singapore and Papua New Guinea. It is estimated that there are fewer than 250 mature trees of the species remaining.

“The loss of mangroves will have devastating economic and environmental consequences,” says Greg Stone, Senior Vice President of Marine Programmes at Conservation International. “These ecosystems are not only a vital component in efforts to fight climate change, but they also protect some of the world’s most vulnerable people from extreme weather and provide them with a source of food and income.”

Photographs are available at: http://bit.ly/c1obw9

About the mangroves assessment

The mangroves assessment is one of a number of strategic global assessments that the Global Marine Species Assessment Unit (GMSA), which is part of the Biodiversity Assessment Unit, a joint initiative of IUCN and Conservation International, has been conducting since 2006 at Old Dominion University in Norfolk, Virginia. Other assessments completed or in progress include the world’s reef-building corals (Carpenter et al. 2008) and seagrasses, as well as all marine fishes, and other important keystone invertebrates.
By 2012, the GMSA plans to complete its comprehensive first stage assessment of the threat of extinction for over 20,000 marine plants and animals, providing an essential baseline for conservation plans around the world, and tracking the extinction risk of marine species. The results of the mangrove species assessment will be placed on the IUCN Red List of Threatened Species in June 2010. The GMSA is largely enabled by the generous support of the New Hampshire Charitable Foundation and Tom Haas. Currently, the assessments can be found at: http://sci.odu.edu/gmsa/about/mangrove.shtml