To help compensate for the greenhouse gas (GHG) emissions associated with the 2012 World Conservation Congress in Jeju, IUCN has selected a credible, sustainable project for effective offsetting. The project is Infapro, by Face the Future, and is based on improved forest management in Borneo. 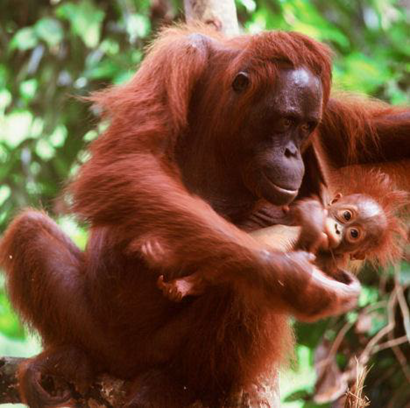 The oldest rainforest in the world, 130 million years old, can be found in Borneo and is one of the last natural habitats for the endangered Orang-utan. In recent years, the establishment of oil palm plantations and unsustainable logging practices have resulted in rapid rates of deforestation and forest degradation, threatening the rich biodiversity of this island.

The Infapro project is one of the largest forest rehabilitation projects in Southeast Asia, and was selected due to its verified emissions reductions of a high standard and its significant biodiversity and social benefits. The project rehabilitates logged rainforest in Sabah, Malaysia, through sustainable forest management activities and works to avoid a second round of logging.

The project developer Face the Future, in cooperation with the Yayasan Sabah Foundation, has rehabilitated approximately 12,000 hectares (ha) of the targeted 25,000 ha of logged rainforest since 1992. This project employs a combination of climber cutting, enrichment planting, liberation thinning and prevention of re-logging.

Liberation thinning promotes the natural regeneration of dipterocarp seedlings and ecologically important fruit species within logged-over rainforest. Silvicultural treatments then encourage the growth and survival of these seedlings. The inclusion of indigenous fruit tree species in enrichment planting and liberation activities aims to increase biodiversity in the area by providing food sources for wildlife.

Research has shown that the rehabilitation project has resulted in the return of many animal species, particularly birds. Orang-utan, Sun bear, and Pygmy elephants are frequently spotted and the conservation and project areas are one of the last refuges for the Sumatran Rhino, a critically endangered species.

The project area also provides a buffer zone around the Danum Valley Conservation Area, a protected area of undisturbed primary tropical rainforest home to more than 120 mammal species and over 340 bird species. Many of these species migrate between the conservation area and the project area, which gives them an enlarged, safe and healthy habitat.

People benefit from the project too, as it creates employment based on forest restoration activities and carbon monitoring. In short, the project provides a model of how carbon finance can deliver climate change mitigation while enhancing biodiversity and supporting local livelihoods. The techniques it has developed are being widely implemented in Sabah where many tens of thousands of hectares of degraded forest are currently under active restoration.

As a world leader in environmental sustainability, IUCN has adopted a greening strategy, which includes the IUCN Carbon Offset Policy to address negative impact on the environment following efforts to avoid and reduce emissions as much as possible.

Participants in the Congress can contribute to the Jeju Carbon Offset Fund, which collects resources to finance the project, by paying the carbon offset fee.

Emissions reductions from the Infapro project have been verified by the Verified Carbon Standard (VCS) and sustainable forest management is certified by the Forest Stewardship Council (FSC).