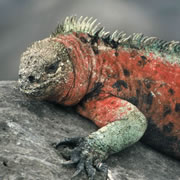 The Galapagos Islands have been added to the list of World Heritage sites in danger following the recommendation of the World Conservation Union (IUCN).

The World Heritage Committee, currently meeting in Christchurch, New Zealand, made the decision after considering the results of a joint monitoring mission by IUCN and UNESCO to the islands in April 2007.

The mission found that annual visitor numbers have increased from 40,000 in 1996 to 120,000 today, bringing with them invasive species by plane and boat. Introduced plant species now outnumber native ones, and 180 of the 500 native plant species on the islands are on the IUCN Red List of Threatened Species. The mission also found that immigration, which increases the local population by 4% every year, is driving development and destroying the integrity of the islands.

David Sheppard, Head of the IUCN delegation in Christchurch, said: “The main problems associated with the Galapagos Islands relate to the impact of tourism growth, which is driving immigration and overfishing. Adding the islands to the danger list is a positive way of raising the profile of these threats and highlighting the need for international action.”

The World Heritage Committee also added Niokolo-Koba National Park in Senegal to the list of World Heritage sites in danger. The joint IUCN and UNESCO monitoring mission to the 913,000 hectare park in January 2007 revealed high levels of poaching. Populations of hartebeest, buffalo and waterbuck declined by 90% between 1990 and 2006, and only 10 elephants currently remain in the site. The population of the endangered giant eland, particularly valued by poachers, is down to a single herd of 67 animals.

On a more positive note, the World Heritage Committee removed Río Plátano in Honduras and the Everglades in America from the danger list. The joint IUCN and UNESCO monitoring mission to Río Plátano in December 2006 found that threats to the property are now largely limited to the buffer zone. IUCN does, however, continue to have some concerns about illegal timber harvest and agricultural activities which are moving towards the border of the World Heritage site.

Two joint IUCN and UNESCO missions have helped stop unsustainable and damaging tourism development in Africa. The Zambian government halted a plan for a riverside hotel and country club on the banks of the Zambezi river near Victoria Falls, after IUCN highlighted the potential negative impacts this would have on the site. The Tanzanian government also halted plans for a fifth hotel to be built on the rim of the crater in the Ngorongoro Conservation Area after a similar mission.

Situated in the Pacific Ocean some 1,000 km from the South American continent, these 19 islands and the surrounding marine reserve have been called a unique “living museum and showcase of evolution”. Located at the confluence of three ocean currents, the Galapagos Islands are a melting pot of marine species. Ongoing seismic and volcanic activity reflect the processes that formed the islands. These processes, together with the extreme isolation of the islands, led to the development of exceptional animal life - such as the land iguana, the giant tortoise and the many types of finch - that inspired Charles Darwin's theory of evolution following his visit in 1835. Previous mission-identified threats to the islands are: illegal fishing, inadequate quarantine measures, high immigration rate, tourism, instability of the Park Director’s position, delay in the full implementation of the Special Law and lack of enforcement and weak governance. The joint 2007 joint IUCN/UNESCO mission conducted stakeholder meetings in an attempt to identify solutions to these problems. One outcome was the Presidential Decree issued on 10 April 2007, during the mission, declaring the conservation and environmental management of the Galapagos ecosystem in a state of risk and national priority, and outlining an agenda to systematically address the various factors affecting the state of conservation of the property. The government has also supported adding the Galapagos Islands to the list of World Heritage sites in danger. For more information: http://whc.unesco.org/en/list/1

Located in a well-watered area along the banks of the Gambia river, the gallery forests and savannahs of Niokolo-Koba National Park have a rich fauna, among them Derby elands (largest of the antelopes), chimpanzees, lions, leopards and a large population of elephants, as well as many birds, reptiles and amphibians. The joint 2007 IUCN/UNESCO mission found that this World Heritage site has lost most of its large mammals to illegal commercial hunting and noted threats to the site, including increased human pastoral population, illegal cattle grazing, illegal hunting of wildlife and plans for a new dam on the Gambia River. For more information: http://whc.unesco.org/en/list/153

Río Plátano is part of the largest surviving area of undisturbed tropical rainforest in Honduras and one of the few remaining in Central America. It has an abundant and varied flora and fauna, and in its mountainous landscape sloping down to the Caribbean coast, over 2,000 indigenous people have preserved their traditional way of life. The joint 2006 IUCN/UNESCO mission identified a number of ongoing threats in the buffer zone to the site, which include the advance of the agricultural border and illegal timber harvest. For more information: http://whc.unesco.org/en/list/196

The IUCN delegation present in Christchurch, New Zealand, will be reporting back from the meeting on a regular basis between 23 June and 2 July. Regular updates can be found on www.iucn.org.

IUCN, whose independent advisory role is enshrined in the text of the World Heritage Convention, has been involved in the Convention since its inception, having played a major part in drafting the text with UNESCO in 1972. IUCN undertakes technical evaluations of the natural values of the sites nominated for inscription on the World Heritage List and has evaluated several hundred nominated sites. Further information on IUCN’s World Heritage work is available at: web

Additionally, each year IUCN reports to the World Heritage Centre on the conservation status of certain natural and mixed World Heritage sites under threat. IUCN’s assessments on what is happening in World Heritage sites are derived from a variety of sources: IUCN members, indigenous peoples groups, the scientific community, experts from IUCN commissions and concerned individuals and organizations.

Photos available on request from sarah.halls@iucn.org

About the World Conservation Union (IUCN)

Created in 1948, the World Conservation Union (IUCN) brings together 84 States, 108 government agencies, 800 plus NGOs, and some 10,000 scientists and experts from 181 countries in a unique worldwide partnership. The Union’s mission is to influence, encourage and assist societies throughout the world to conserve the integrity and diversity of nature and to ensure that any use of natural resources is equitable and ecologically sustainable.

More information can be found at www.iucn.org