The world’s only intact fossil of an early whale – the Basilosaurus dating about 40 million years ago – has been uncovered during a new excavation at Wadi Al-Hitan, a natural World Heritage site in Egypt. The discovery reveals for the first time the creature’s complete skeleton and includes fossilised remains of other sea creatures inside its stomach. 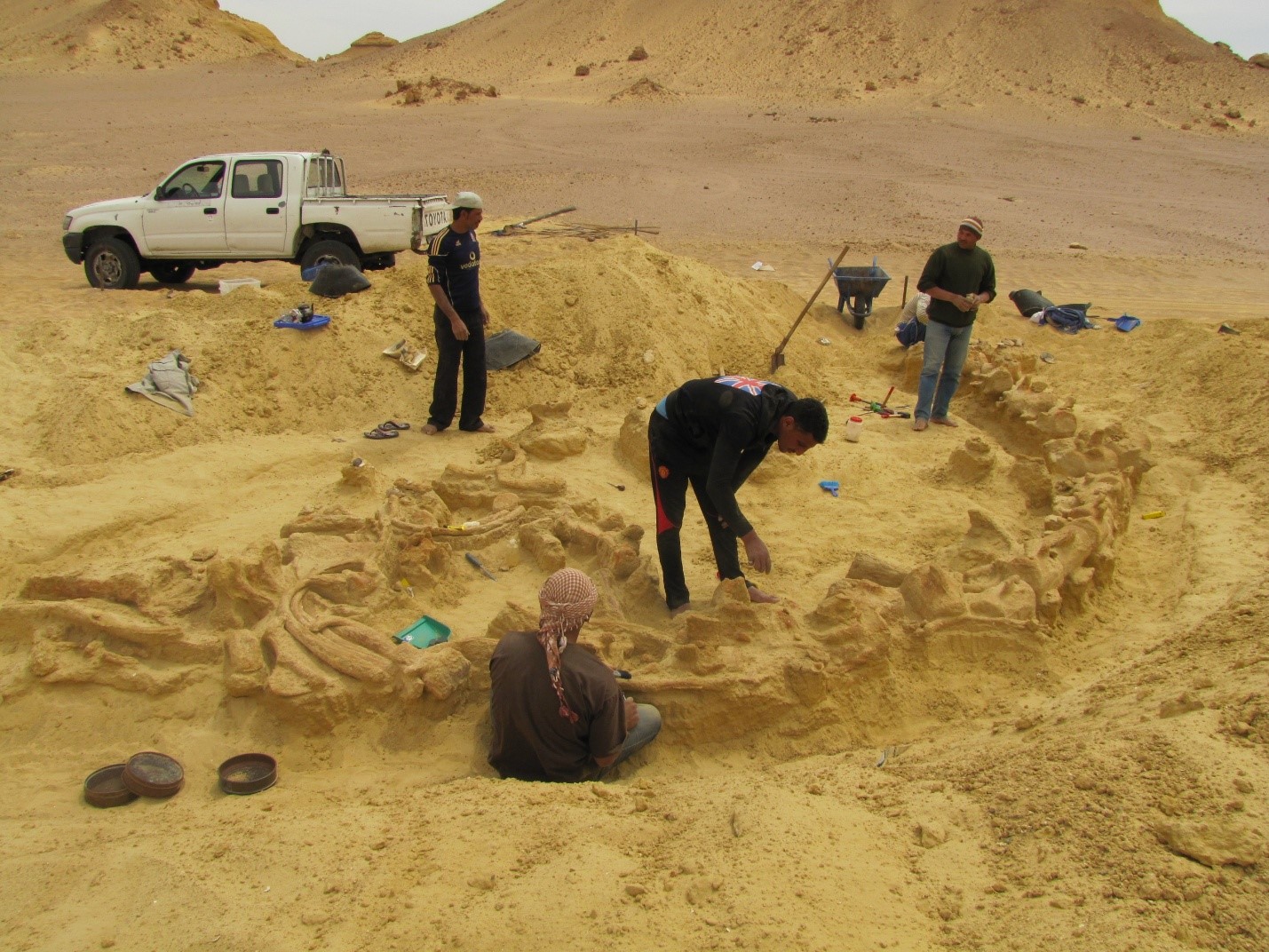 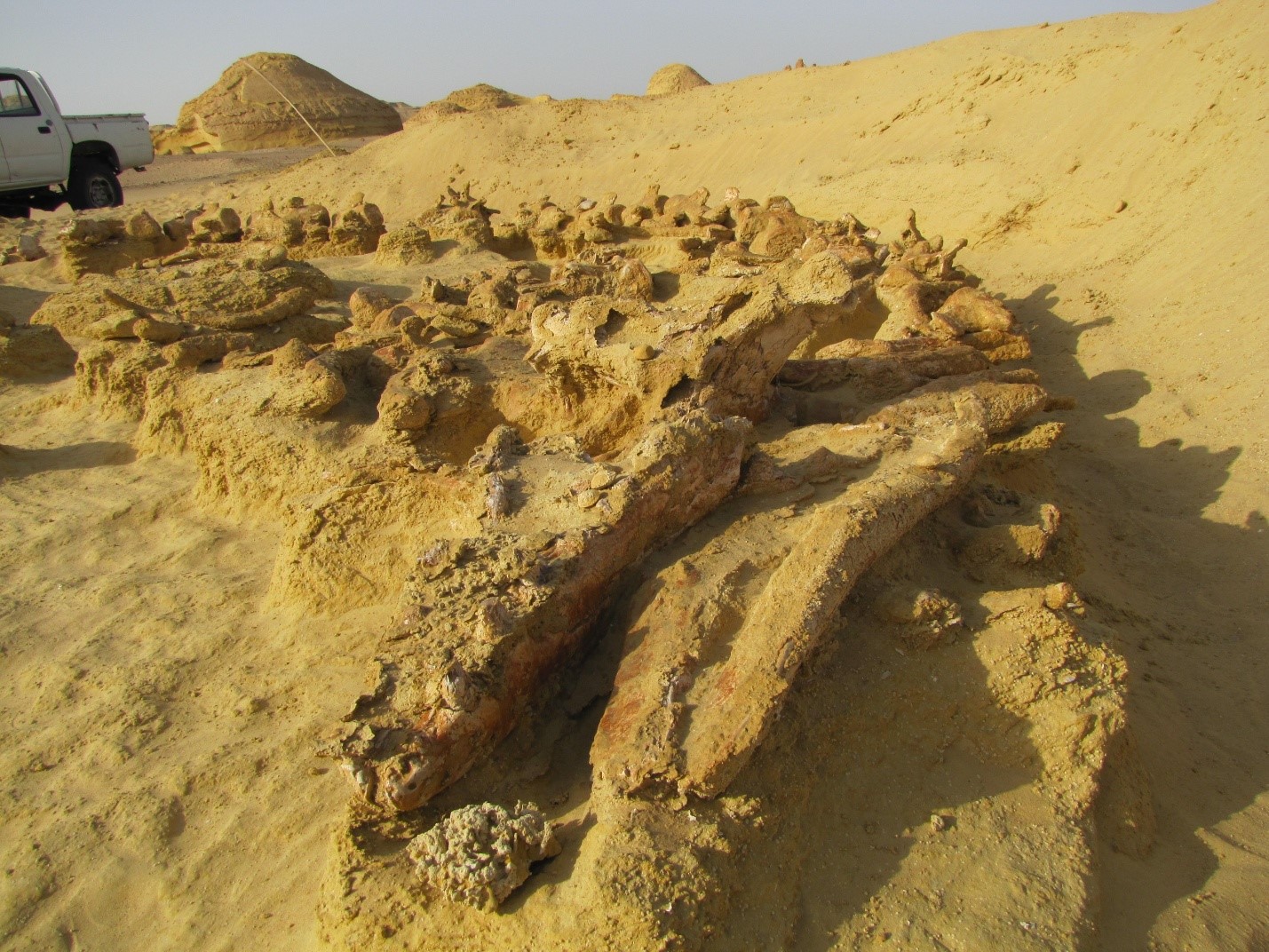 The new excavation features a large group of fossilized whales. The 18-metre-long Basilosaurus is considered the only fully complete fossil of its kind discovered so far in the world, with an intact skeleton revealing the creature’s tail spines for the first time.

Remains of sea creatures inside the whale, precisely where the stomach would have been, were also discovered. These include crab, sawfish – and a small whale that was preyed by the Basilosaurus. Next to the fossilised structure, several sets of shark teeth illustrate how the whale was eaten after its death and reflect the abundance of such species that existed at the time.

The fossils hint on the diversity of marine life in the area approximately 40 million years ago, which is now covered by desert.

Also known as the Whale Valley, Wadi Al-Hitan is Egypt’s only natural World Heritage sites and contains invaluable fossil remains of the earliest kind of prehistoric whales. The fossils represent a major step in Earth’s history when whales evolved from land-based to ocean-going mammals. The Basilosaurus is the first whale species appearing to be entirely living in the sea after walking whales, of which there are fossils in Pakistan.

The unique features of the new discovery opens up new horizons for scientific research in the field of Vertebrate Paleontology, and may help answer questions about the life of  ancient whales, their feeding behaviour and their relationship to other organisms.

This global discovery was announced last week by Egypt’s Minister of Environment, following excavation work carried out by a national task force led by Wadi Al-Hitan’s manager, Dr. Mohamed Sameh Antar. The team’s scientists have chosen the Basilosaurus to be the main figure of the Fossils Climate Change Museum that will open soon in Wadi Al-Hitan.

The excavation task force was established in 2012 and has since carried out several geological expeditions, leading to the discovery of these very important fossils for Egypt and for the world.

A core planning team has been in place in Wadi El-Hitan since 2001 as part of the Nature Conservation Sector within Egypt’s Environmental Affairs Agency. The team, which includes Dr Mohamed Sameh Antar and Dr Mohamed Talaat El-Hennawy as experts in geology and ecology respectively, pioneered a site management plan featuring an open air and fossil museum, helping to promote Wadi El-Hitan as a key destination for paleontological research and ecotourism.

This work, which included preparing the nomination file that led the site to be listed as World Heritage in 2005, was implemented under the umbrella of the Ministry of Environment, thanks to financial support by the Italian Cooperation Environmental Programme and scientific support from Michigan University.

Wadi Al-Hitan is one of 47 natural World Heritage sites currently listed to have a good conservation outlook, with protection and management assessed as effective, according to the IUCN World Heritage Outlook.