2007 IUCN Red List of Threatened Species™, the world’s most authoritative assessment of the Earth’s plants and animals, acts as a wake up call on the global extinction crisis 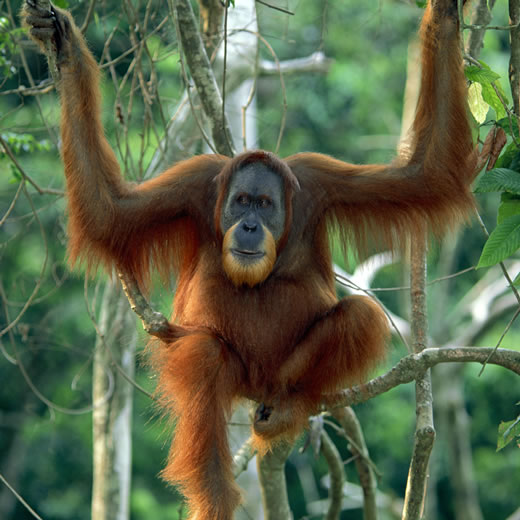 Life on Earth is disappearing fast and will continue to do so unless urgent action is taken, according to the 2007 IUCN Red List of Threatened Species.

There are now 41,415 species on the IUCN Red List and 16,306 of them are threatened with extinction, up from 16,118 last year. The total number of extinct species has reached 785 and a further 65 are only found in captivity or in cultivation.

One in four mammals, one in eight birds, one third of all amphibians and 70% of the world’s assessed plants on the 2007 IUCN Red List are in jeopardy.

Julia Marton-Lefèvre, Director General of the World Conservation Union (IUCN), said: “This year’s IUCN Red List shows that the invaluable efforts made so far to protect species are not enough. The rate of biodiversity loss is increasing and we need to act now to significantly reduce it and stave off this global extinction crisis. This can be done, but only with a concerted effort by all levels of society.”

The IUCN Red List of Threatened Species is widely recognized as the most reliable evaluation of the world’s species. It classifies them according to their extinction risk and brings into sharp focus the ongoing decline of the world’s biodiversity and the impact that mankind is having upon life on Earth.

Jane Smart, Head of IUCN’s Species Programme, said: “We need to know the precise status of species in order to take the appropriate action. The IUCN Red List does this by measuring the overall status of biodiversity, the rate at which it is being lost and the causes of decline.

“Our lives are inextricably linked with biodiversity and ultimately its protection is essential for our very survival. As the world begins to respond to the current crisis of biodiversity loss, the information from the IUCN Red List is needed to design and implement effective conservation strategies – for the benefit of people and nature.”

The decline of the great apes

A reassessment of our closest relatives, the great apes, has revealed a grim picture. The Western Gorilla (Gorilla gorilla) has moved from Endangered to Critically Endangered, after the discovery that the main subspecies, the Western Lowland Gorilla (Gorilla gorilla gorilla), has been decimated by the commercial bushmeat trade and the Ebola virus. Their population has declined by more than 60% over the last 20-25 years, with about one third of the total population found in protected areas killed by the Ebola virus over the last 15 years.

The Sumatran Orangutan (Pongo abelii) remains in the Critically Endangered category and the Bornean Orangutan (Pongo pygmaeus) in the Endangered category. Both are threatened by habitat loss due to illegal and legal logging and forest clearance for palm oil plantations. In Borneo, the area planted with oil palms increased from 2,000 km2 to 27,000 km2 between 1984 and 2003, leaving just 86,000 km2 of habitat available to the species throughout the island.

First appearance of corals on the IUCN Red List

Corals have been assessed and added to the IUCN Red List for the very first time. Ten Galápagos species have entered the list, with two in the Critically Endangered category and one in the Vulnerable category. Wellington’s Solitary Coral (Rhizopsammia wellingtoni) has been listed as Critically Endangered (Possibly Extinct). The main threats to these species are the effects of El Niño and climate change.

In addition, 74 seaweeds have been added to the IUCN Red List from the Galápagos Islands. Ten species are listed as Critically Endangered, with six of those highlighted as Possibly Extinct. The cold water species are threatened by climate change and the rise in sea temperature that characterizes El Niño. The seaweeds are also indirectly affected by overfishing, which removes predators from the food chain, resulting in an increase of sea urchins and other herbivores that overgraze these algae.

After an intensive, but fruitless, search for the Yangtze River Dolphin, or Baiji, (Lipotes vexillifer) last November and December, it has been listed as Critically Endangered (Possibly Extinct). The dolphin has not been placed in a higher category as further surveys are needed before it can be definitively classified as Extinct. A possible sighting reported in late August 2007 is currently being investigated by Chinese scientists. The main threats to the species include fishing, river traffic, pollution and degradation of habitat.

India and Nepal’s crocodile, the Gharial (Gavialis gangeticus) is also facing threats from habitat degradation and has moved from Endangered to Critically Endangered. Its population has recently declined by 58%, from 436 breeding adults in 1997 to just 182 in 2006. Dams, irrigation projects, sand mining and artificial embankments have all encroached on its habitat, reducing its domain to 2% of its former range.

This year the total number of birds on the IUCN Red List is 9,956 with 1,217 listed as threatened. Vultures in Africa and Asia have declined, with five species reclassified on the IUCN Red List. In Asia, the Red-headed Vulture (Sarcogyps calvus) moved from Near Threatened to Critically Endangered while the Egyptian Vulture (Neophron percnopterus) moved from Least Concern to Endangered. The rapid decline in the birds over the last eight years has been driven by the drug diclofenac, used to treat livestock.

In Africa, three species of vulture have been reclassified, including the White-headed Vulture (Trigonoceps occipitalis), which moved from Least Concern to Vulnerable, the White-backed Vulture (Gyps africanus) and Rüppell’s Griffon (Gyps rueppellii), both moved from Least Concern to Near Threatened. The birds’ decline has been due to a lack of food, with a reduction in wild grazing mammals, habitat loss and collision with power lines. They have also been poisoned by carcasses deliberately laced with insecticide. The bait is intended to kill livestock predators, such as hyenas, jackals and big cats, but it also kills vultures.

After a major assessment of Mexican and North American reptiles, 723 were added to the IUCN Red List, taking the total to 738 reptiles listed for this region. Of these, 90 are threatened with extinction. Two Mexican freshwater turtles, the Cuatro Cienegas Slider (Trachemys taylori) and the Ornate Slider (Trachemys ornata), are listed as Endangered and Vulnerable respectively. Both face threats from habitat loss. Mexico’s Santa Catalina Island Rattlesnake (Crotalus catalinensis) has also been added to the list as Critically Endangered, after being persecuted by illegal collectors.

There are now 12,043 plants on the IUCN Red List, with 8,447 listed as threatened. The Woolly-stalked Begonia (Begonia eiromischa) is the only species to have been declared extinct this year. This Malaysian herb is only known from collections made in 1886 and 1898 on Penang Island. Extensive searches of nearby forests have failed to reveal any specimens in the last 100 years.

The Wild Apricot (Armeniaca vulgaris), from central Asia, has been assessed and added to the IUCN Red List for the first time, classified as Endangered. The species is a direct ancestor of plants that are widely cultivated in many countries around the world, but its population is dwindling as it loses habitat to tourist developments and is exploited for wood, food and genetic material.

Overfishing continues to put pressure on many fish species, as does demand from the aquarium trade. The Banggai Cardinalfish (Pterapogon kauderni), which is highly prized in the aquarium industry, is entering the IUCN Red List for the first time in the Endangered category. The fish, which is only found in the Banggai Archipelago, near Sulawesi, Indonesia, has been heavily exploited, with approximately 900,000 extracted every year. Conservationists are calling for the fish to be reared in captivity for the aquarium trade, so the wild populations can be left to recover.

These highlights from the 2007 IUCN Red List are merely a few examples of the rapid rate of biodiversity loss around the world. The disappearance of species has a direct impact on people’s lives. Declining numbers of freshwater fish, for example, deprive rural poor communities not only of their major source of food, but of their livelihoods as well.

Species loss is our loss

Conservation action is slowing down biodiversity loss in some cases, but there are still many species that need more attention from conservationists. This year, only one species has moved to a lower category of threat. The Mauritius Echo Parakeet (Psittacula eques), which was one of the world’s rarest parrots 15 years ago, has moved from Critically Endangered to Endangered. The improvement is a result of successful conservation action, including close monitoring of nesting sites and supplementary feeding combined with a captive breeding and release programme.

Jean-Christophe Vié, Deputy Head of IUCN’s Species Programme, said: "From previous experience, we know that conservation can work, but unfortunately this year we are documenting an improvement for only one species. This is really worrying in light of government commitments around the world, such as the 2010 target to slow down the rate of biodiversity loss. Clearly, this shows that much more needs to be done to support the work of thousands of enthusiastic people working everyday throughout the world to preserve the diversity of life on this planet."

Holly Dublin, Chair of IUCN’s Species Survival Commission, said: “Conservation networks dedicated to fighting the extinction crisis, such as the Species Survival Commission, are working effectively. But much more help and support is needed as environmentalists cannot do it alone. The challenge of the extinction crisis also requires attention and action from the general public, the private sector, governments and policy makers to ensure that global biodiversity remains intact for generations to come.”

To help IUCN in its fight against the extinction crisis, donate now. https://www.iucn.org/themes/ssc/donation/donation_page.htm

For information about more species on this year’s IUCN Red List please visit (web) and www.iucnredlist.org

2 minute video B roll and photo gallery of the IUCN Red List of Threatened Species prepared by Arkive www.arkive.org

The Union is the world's largest environmental knowledge network and has helped over 75 countries to prepare and implement national conservation and biodiversity strategies. The Union is a multicultural, multilingual organization with 1,000 staff located in 62 countries. Its headquarters are in Gland, Switzerland.
www.iucn.org