IUCN’s Members have issued over 1300 Resolutions since the organisation’s founding in 1948. These have been the Union’s most effective means of influencing conservation policy, at species, site, national and global levels.

Since its beginnings, IUCN Members have convened every two to four years to debate and agree major policy issues and approve the organisation’s programme. A major outcome of these meetings are the Resolutions and Recommendations.

Throughout the years, they have helped set the international conservation agenda, for example through supporting the preparation of the World Conservation Strategy and contributing to environmental treaties such as CITES, Ramsar, World Heritage and the Convention on Biological Diversity. Through its Resolutions, IUCN has been a steadfast supporter of Indigenous peoples, gender issues and the recognition of conservation as part of human rights. It has also focused attention on conserving threatened species and protected areas, helping to design effective approaches that are now global standards. The Resolutions process reflects IUCN’s leadership in promoting sustainable relationships between people and nature. 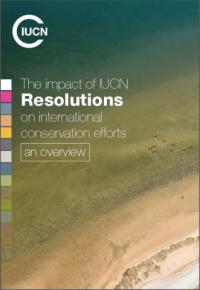 An overview of the impact of IUCN Resolutions released in 2018 briefly highlights some of the major impacts and influences that IUCN Resolutions have had on conservation. It focusses attention on some of the most significant issues that the IUCN Membership has addressed, working together with IUCN’s six Commissions and supported by IUCN’s Secretariat.