The International Union for the Conservation of Nature (IUCN), in collaboration with the Planning and Development Board, Government of Punjab launched Pakistan’s first ever Climate Change Gender Action Plan in Punjab. 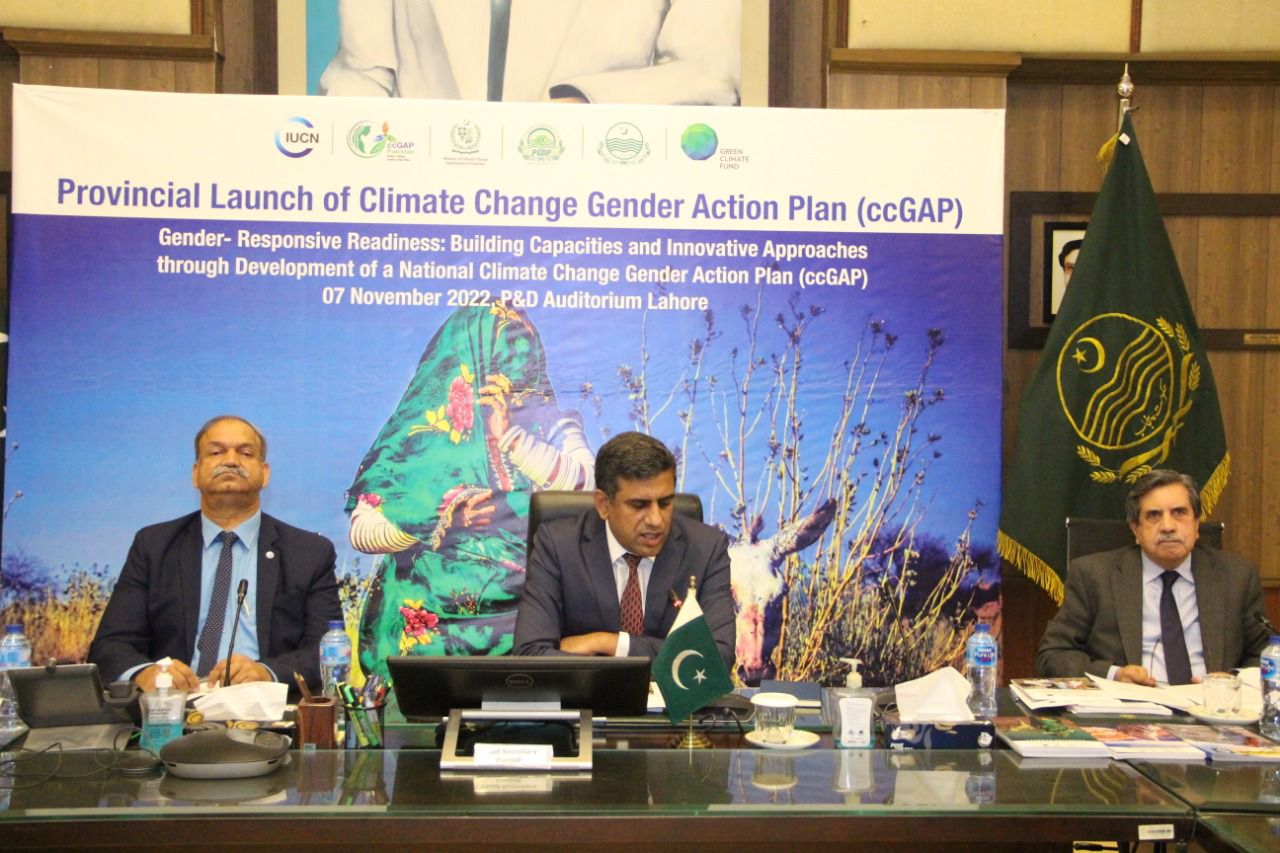 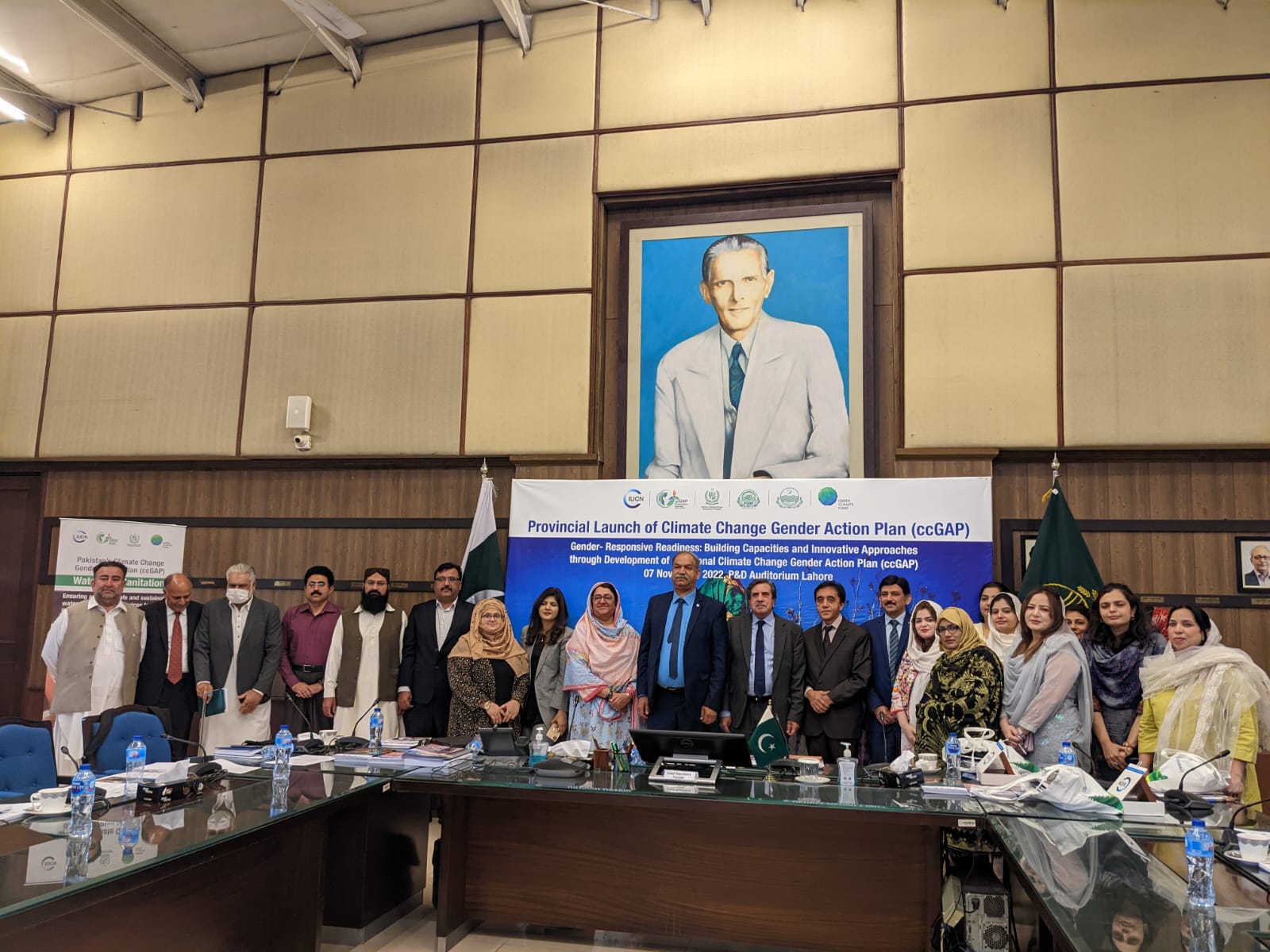 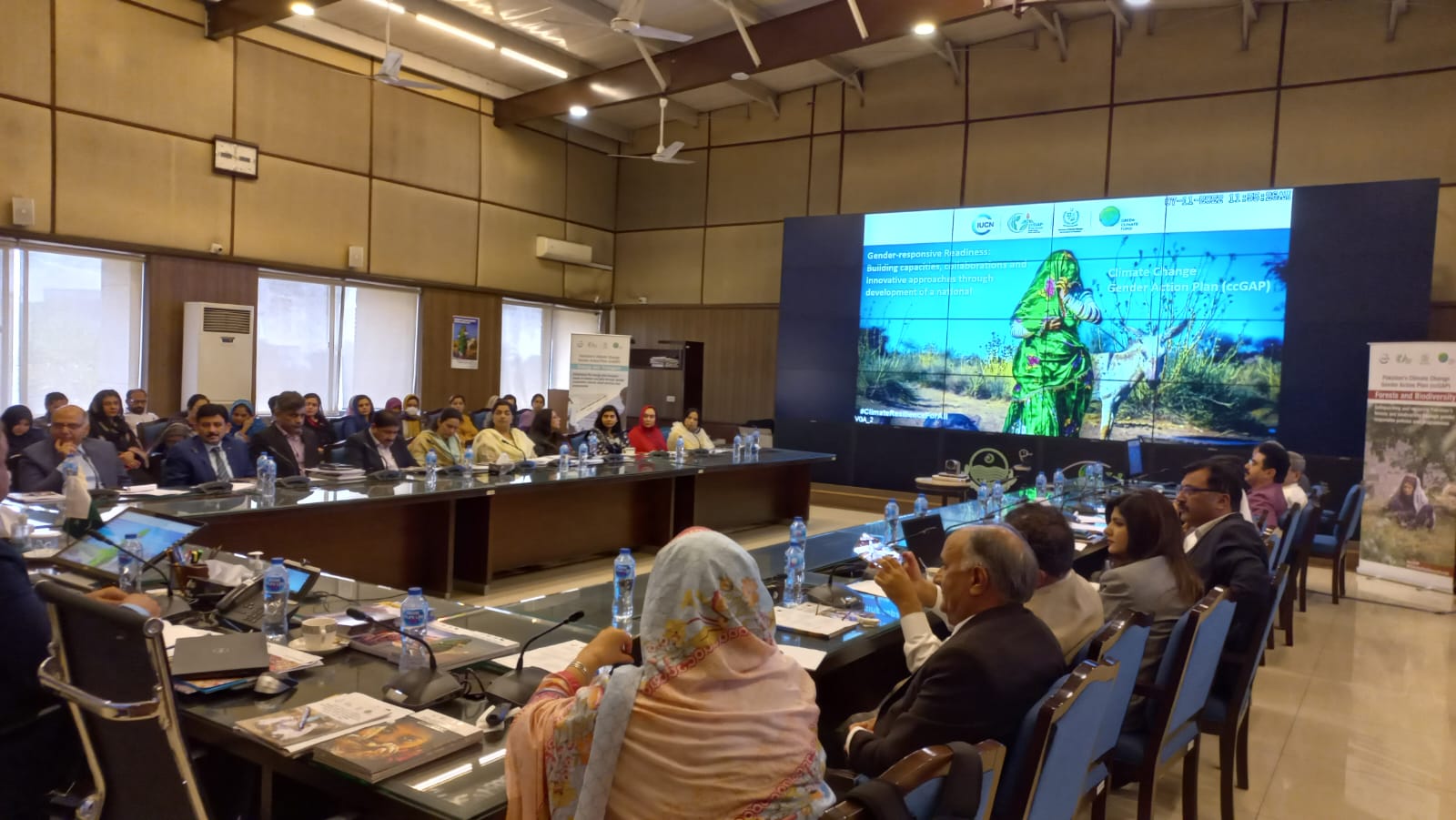 They launched an interactive Framework for Action called the Climate Change Gender Action Plan (ccGAP) that illustrates the opportunity for multi-stakeholders and Climate and Gender champions to regain momentum on climate change and Gender, make the necessary pivot from negotiations to implementation in order to make the massive transformation that must take place throughout all sectors of society to address the climate emergency.

GoP and IUCN, in recognizing the important opportunity for bringing innovative adaptation and resilience solutions for those who are most vulnerable especially women, prepared the Climate Change Gender Action Plan as an Action Framework for evidence-based resources to help and support committed stakeholders deliver Climate and Gender solutions around 6 priority sectors i.e Energy and Transport, Agriculture and Food Security, Water and Sanitation, Disaster Risk Reduction, Forest and Biodiversity, and Integrated Coastal Management.

The launch of ccGAP document in Punjab addressed the negative impacts of climate change and disproportionate impact on women. The ccGAP is a roadmap to support the Government in policy making and mapping of these at-risk individuals and communities on the front lines of climate change to anticipate and recover from disasters, adapt livelihoods, and build long-term resilience around 6 priority sector. ccGAP also provides the opportunity to involve and include the vulnerable groups in becoming the solution instead of being a liability.

Starting the event, Secretary P&D Board Dr. Sohail Anwar said that climate change is not gender neutral. In Punjab, we always promote the initiatives to strengthen the productive role of women enhanced, well recognized and acknowledged. Punjab province will lead from the front. Speaking on the occasion Mahmood Akhtar Cheema, Country Representative IUCN Pakistan spoke about the importance of gender and climate and how it will be streamlined into the main policy making curriculum. He further appreciated the efforts of P&D in embedding gender in part of their Punjab Green Development Programme. Dr. Muhammad Abid Bodla, Member Environment & CC, P&D Board highly appreciated the initiative and termed it as very timely launch at the time of UNFCCC COP event.

Ms. Fauzia Bilqis Malik, Programme Coordinator IUCN Pakistan presented the participatory development process of climate change gender action plan and presented highlights of the action plan of sectors. She emphasized that it can become part of the PC1 as mainstreamed in the planning process. DPC PCU, PGDP briefly explained scope of Punjab Green Development Program and how the project is interconnected with all sectors. She further gave a snapshot of environmental challenges in Pakistan and role of women in combating climate change impacts as men and women both are equally vulnerable to impacts of climate change. She appreciated the launch of first ever gender-based climate change action plan in Punjab which is an inclusive roadmap to grow in a sustainable manner. She emphasized that implementation of this action plan with strengthen and empower the professional women to lead and include other women in the process as change agents. She also highlighted the need for provincial action plans and framework to best implement and build new projects with gender inclusion.

The event concluded with consensus and unanimous testimonies across the board on climate change by continuing to address climate change and gender adaptation through Climate Change Gender Action plan (ccGAP) aiming at saving lives and livelihoods to a more sustainable economy and managed transition where climate anomalies do not disproportionately affected women only, to ensure no one is left behind.

The launch was held at P&D and co-organized by IUCN Pakistan and the Program Coordination Unit, Punjab Green Development Program, and P&D Board. Government officials from various departments participated in the launch event. 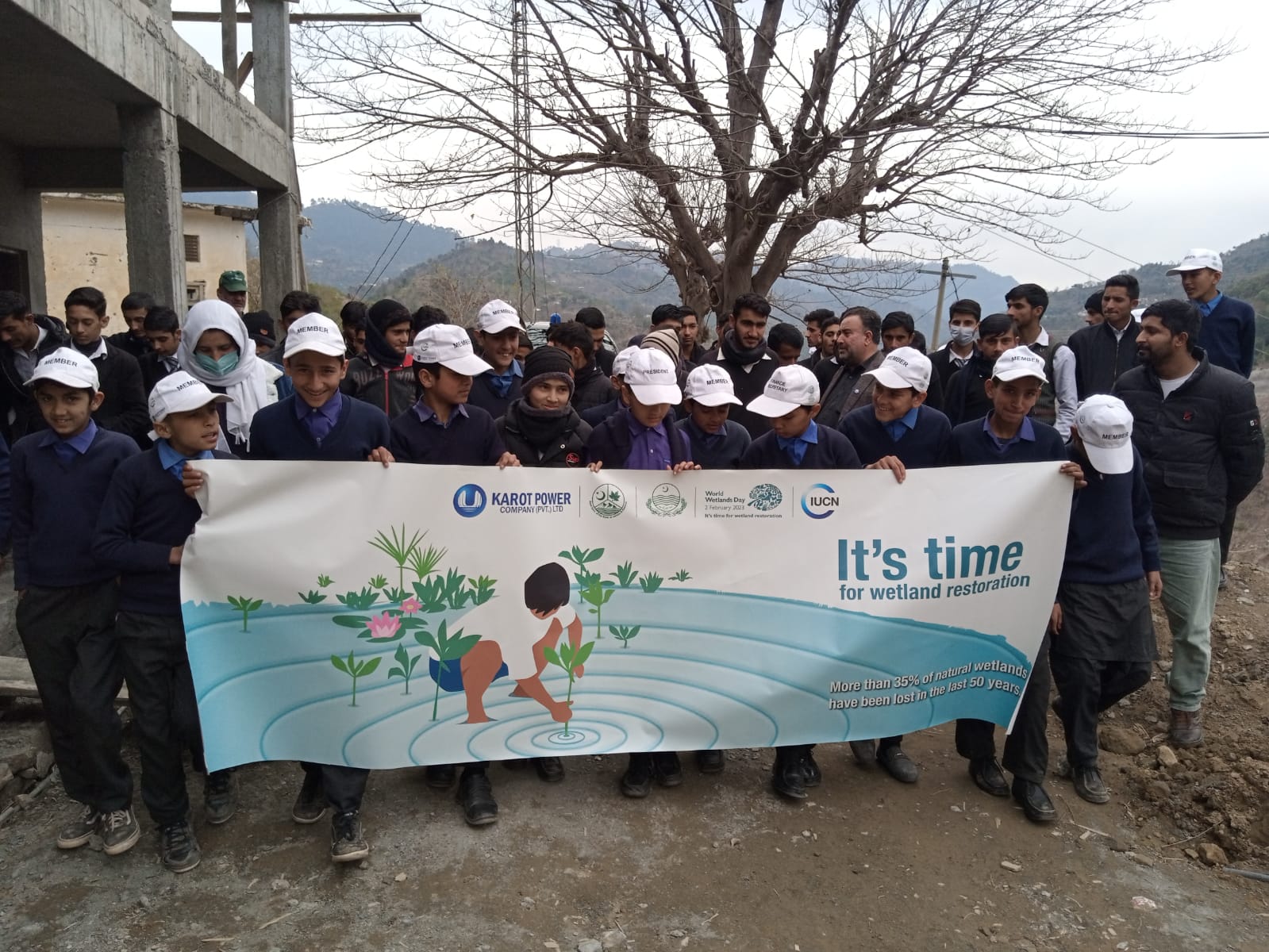 World Wetlands Day was celebrated in Azad Pattan, Azad Jammu & Kashmir today with a focus on… 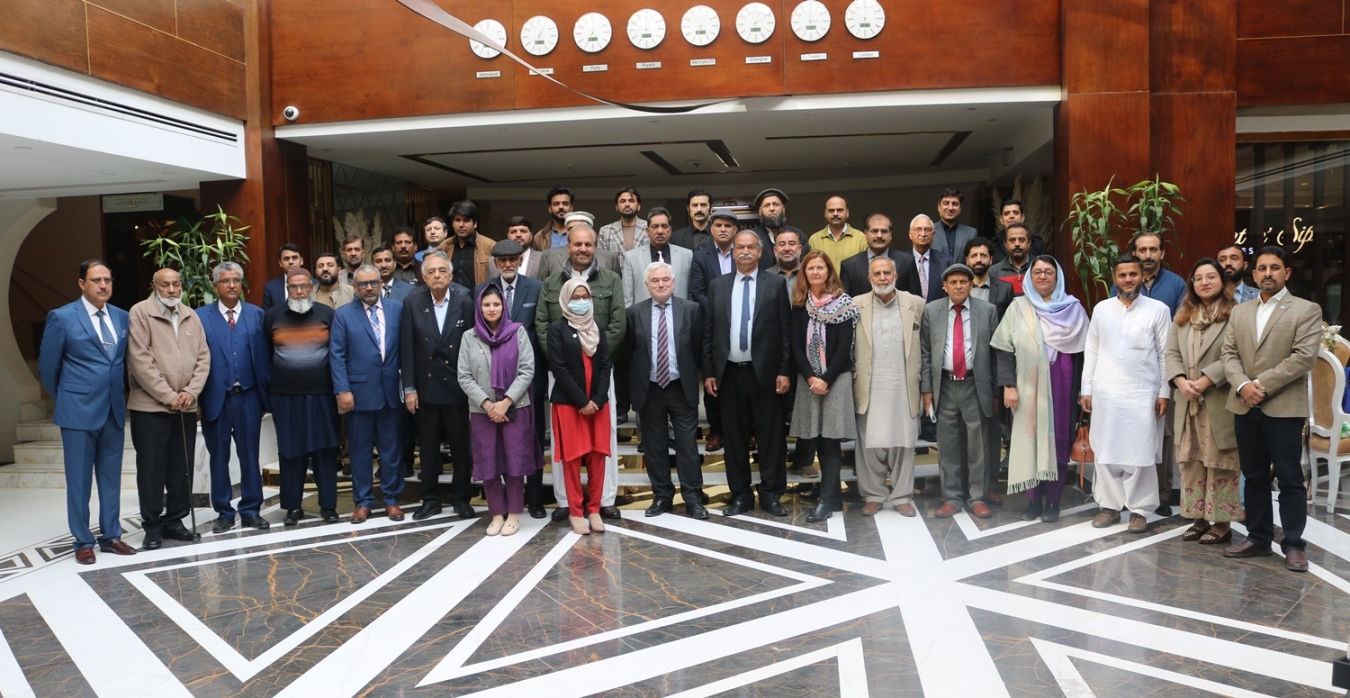 Story | 10 Jan, 2023
Mapping the Future: A National Workshop on Silvo-Ecological Zones and…

A two days national workshop has been kicked off to finalize the Silvo-ecological zones maps, and… 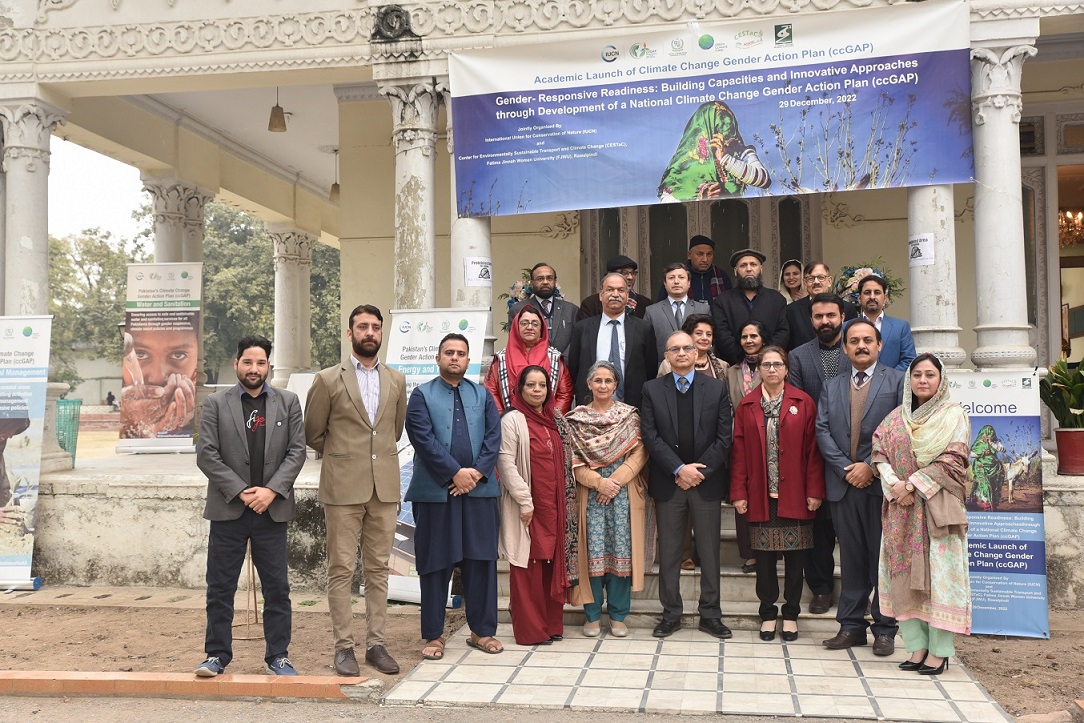