Negotiations to Begin for Agreement on Biodiversity Beyond Areas of National Jurisdiction: Specialist Group Contributions

Members of the WCEL Oceans, Coasts and Coral Reefs Specialist Group contributed to a milestone in the United Nations Convention on the Law of the Sea through their participation in the two-year process of developing recommendations for conservation and sustainable use of marine biodiversity in areas beyond national jurisdiction.

Dais applauds the conclusion of PrepCom4 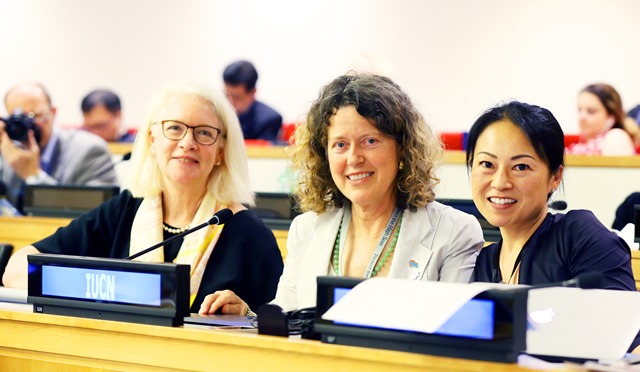 On the evening of 21 July 2017, a UN Preparatory Committee agreed, by consensus, to recommend that the UN General Assembly decide as soon as possible to begin intergovernmental negotiations on a legally binding agreement. This now concludes more than a decade of preparatory work to set the stage for a treaty to safeguard marine life beyond national jurisdiction. The high seas and International Seabed Area account for nearly two-thirds of the global ocean and are critical to providing food, jobs and nearly 50% of the oxygen we breathe; the ocean absorbs nearly 30% of the CO2 we emit daily and has absorbed 93% of the heat resulting from increased CO2.

The Preparatory Committee’s report covers options for management of marine genetic resources, especially access and benefit-sharing; environmental impact assessment; area-based management tools, especially marine protected areas; capacity-building and technology transfer; and cross-cutting issues like institutional design. The UN General Assembly must now agree to a formal resolution launching negotiations, and could begin negotiating in 2018. It is assumed that there will be two sessions a year, each two weeks, running for at least two years. The WCEL Specialist Group provided expertise to the numerous meetings as members of several delegations. Additional participation in the UN Ocean Conference, held the previous month to launch SDG 14-Life Below Water, also supported the goals of ocean conservation. Both implementation of SDG 14 commitments and the development of a text for an international instrument on governance of ocean biodiversity will provide many opportunities for the Specialist Group to further contribute.