On January 6, 2017, a cold winter’s day in Germany, under clear blue sky with bright sunshine, Wolfgang E. Burhenne’s  life ended, peacefully, with his daughter Raphaella and her family at home. His family plans a memorial celebration of the life and work of Wolfgang Burhenne in the coming months. The funeral was private, for the family. 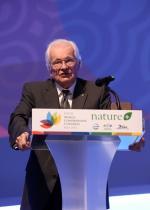 Photo: IUCN
Wolfgang Burhenne’s passion for inventing laws to protect all manner of flora and fauna is legendary. More than any other single individual, he conceived and nourished laws for nature conservation and environmental stewardship across the Earth. He was as much at home in the Alps of Austria or Bavaria as he was in East Africa or the Arabian Peninsula. He loved la chasse and nourished care for wild animals. At the same time, he devoted his life to building what the world now accepts as sustainable development, helping people to live in greater harmony with nature. He was as much at home in the hallways of the United Nations in New York or Geneva as he was in parliamentary offices across Germany.

Born April 27, 1924, Wolfgang Burhenne’s formal education ended with the outbreak of the Second World War. He supported resistance to the Nazi regime, and was incarcerated in prison camps. Following the war, he developed Bavaria’s wildlife and hunting legislation. Once the Federal Republic of Germany was established in 1949, he founded one of the first wildlife conservation organizations in Germany and participated in preparing laws across the German Länder through serving the new Inter-Parliamentary Working Center (IPA) in Bonn. Following establishment of the International Union for the Conservation of Nature in 1948, he began his passionate engagement with the Union at its Second Assembly of State and NGO Members in Brussels. With his IUCN contacts in 1952, he began his life-long work for the conservation of the European Alps.

In 1956, working from his offices in the Villa Salviati, across from the German Chancellery, he founded IUCN’s Environmental Law Centre. At his urging, IUCN had set up a committee on legislation in 1952-53, which became its Commission on Environmental Law in 1963. Meanwhile, he was a signatory to the Morges Manifesto, which launched IUCN’s World Wildlife Fund to raise funds for conservation. Through the German WWF, Wolfgang Burhenne met Elisabeth Haub, a distinguished German conservationist who advocated the adoption of strong laws for conserving and sustainably using nature. Through her generous support, and that of her family, IUCN’s Environmental Law Commission and Centre secured the financial support for IUCN’s global endeavors to establish international environmental law.

With the framework for IUCN’s Environmental Law Programme established, Wolfgang Burhenne asked IUCN’s first Secretary General, Jean-Paul Harroy, to employ IUCN’s first lawyer, Françoise Guilmin. In 1963, she began her work on the African Convention on the Conservation of Nature & Natural Resources. Wolfgang and Françoise were married in 1970, and were a globally celebrated partnership for leading the establishment of environmental law, until her death in 2013. In 1972, Wolfgang and Françoise led IUCN‘s delegation to the 1972 United Nations Stockholm Conference on the Human Environment, where they recruited new members for the Commission on Environmental Law, including Nicholas A. Robinson, who later became its chair.  The team immediately began work on the 1973 Washington Convention on International Trade in Endangered Species of Wild Flora and Fauna (CITES). With the passing of Elisabeth Haub in 1977, Helga and Erivan Haub continued philanthropic support for IUCN’s environmental law projects. Further achievements include the Bonn Convention on Migratory Species of Wild Animals (1979), the United Nations World Charter for Nature (1982), the UN Convention on the Law of the Sea (1982), the UN Convention on Biological Diversity (1992), and other regional and international treaties.

After the Stockholm Conference recommended creation of the United Nations Environment Programme (UNEP), Wolfgang worked closely with UNEP’s Executive Director and environmental law team from 1976 onward. In 1979, at a UN Meeting in Bangkok, Wolfgang recruited Dr. Parvez Hassan to join the Commission on Environmental Law; he would succeed Wolfgang Burhenne to Chair of the Commission. Both Parvez Hassan and Nicholas Robinson joined Wolfgang and Françoise Burhenne to represent IUCN at the 1992 UN Conference on Environment & Development, the Rio Earth Summit.

At the 10th IUCN Assembly in 1969 in New Delhi, Wolfgang Burhenne, with Negendra Singh and others, founded the International Council of Environmental Law (ICEL), to further the work of IUCN’s Environmental Law Programme. The pioneers of environmental law became members of ICEL, which continues as a Swiss association accredited to the United Nations. The Wheel of Law, a Buddhist symbol, became the logo of ICEL and of the Elisabeth Haub Prizes for Environmental Law and Environmental Diplomacy. Through ICEL, he founded and edited the Journal Environmental Policy & Law: The Journal for decision-makers and several books. The Haub family was a strong advocate and principal supporter of ICEL’s activities.

Wolfgang Burhenne’s accomplishments are all the more extraordinary when we recall that he did not complete his forestry studies; being self-educated. He was honored with degrees of Doctor of Laws, honoris causa, from the University of Bhopal in India (1980) and from Pace University in New York (1987). IUCN conferred the Harold Coolidge Award, its highest honor, on Wolfgang Burhenne in 2012. The World Commission on Environmental Law celebrates his life’s work and mourns his passing. He lives on in our environment, which his conservation laws protect. His biography, A Sustainable Life by Vivienne Klimke (2015), recounts his life, and is available for purchase at www.artemis-pr.de. His vision and dedication is further highlighted in the definitive historical record Weaving a Web of Environmental Law: Contributions of the IUCN Environmental Law Programme.