We have lost one of the great architects of protected areas world-wide. After a short illness, Larry Hamilton died on 6 October near his home in Vermont. His beloved wife, Linda, was with him. By Adrian Phillips.*

Larry was 91. But his youthful energy and joie de vivre survived to the end, and this made him seem much younger than he was. So he leaves a real gap in my life and in that of lots of other World Commission on Protected Areas (WCPA) people who knew him. Many were moved to write on hearing of his death, calling him “a lovely person”, “a wise counsellor”, “a great champion of conservation”, “a marvellous friend” and “a man of great humour”. People loved and admired Larry because they recognised the deep morality that guided his love of nature and his view of the world. He believed in peace unto nature, and peace among humanity.

After service as a Royal Navy pilot in WWII, Larry developed a career in forestry, initially in Canada, then at Cornell University, which expanded into natural resources policy and planning. Working as an academic and a practitioner, his interests took him to many parts of the world. He first made his mark in WCPA in the 1980s - at that time it was CNPPA, the Commission on National Parks and Protected Areas - when he was Senior Fellow of the East West Center in Hawai’i. He brought to our Commission a passion for all things montane - from mountain peoples to sacred forests and cloud forests.

Photo: Linda Hamilton
Under Larry’s leadership, the mountain theme became one of the strongest global networks of experts within our wider family of protected areas leaders. He built and led the Commission’s constituency of mountain enthusiasts and experts between 1992 (the Caracas Parks Congress) until 2003, retiring as Vice Chair at the Durban World Park’s congress. He brought them together in numerous WCPA mountain workshops - such as those in Hawaii (1991), Australia (1995), Canada (1996) and South Africa (2003) - which produced valuable products and helped build a formidable esprit de corps among the “mountaineers”. Larry’s mountain network numbered over 400 by the time he retired.

Along with Bing Lucas (CNPPA chair until 1994), and Graeme Kelleher, who led our marine work, Larry was one of a handful of people who shaped the Commission during that productive period. There was always a special chemistry between Bing and Larry. Bing was born just one day before Larry, so he was "Silver Fox 1" and Larry "Silver Fox 2". There was, too, a gentle rivalry between Graeme (with his claim to 70% of the earth’s surface) and Larry (whose realm towered over all else). They could agree however on the importance of sea mounts. I was privileged to have worked with these fantastic people: brilliant minds, passionate about the cause and great fun to be with.

Larry was a devoted Commission person, enthusiastically taking on wider duties and a wholly reliable and hardworking member of our Steering Committee. He and Kenton Miller developed the WCPA’s work on large scale ecosystem connectivity. He was, too, a strong advocate of our transboundary protected areas work, as much for what it can do for building peace as for saving nature. He took the mountain message to a wider audience when he represented CNPPA/IUCN on the small international team that called for action on mountain conservation at the 1992 UN Earth Summit in Rio de Janeiro, an initiative that led to the mountain chapter of Agenda 21.

His on-the-ground legacy is found in many mountain protected areas whose management had been guided by his advice, including parks and reserves in Australia, Bhutan, Canada, Ecuador, USA and Nepal. And around the world there are devoted mountain protected areas people who were inspired by Larry and his teaching, and apply the lessons he taught in their own parks. 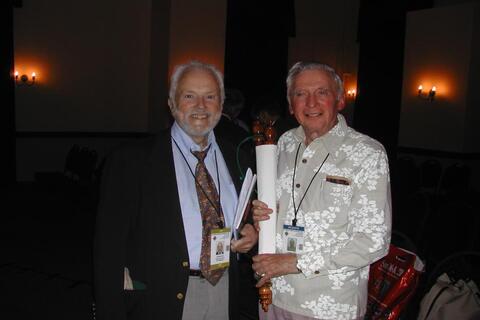 Richly and rightly awarded by the many bodies he worked with, Larry received: the New York State Conservation Council’s Forest Conservationist of the Year award (1969); the Environmental Achiever Award from Friends of UNEP (1987); our own Packard International Parks Merit Award (2003); the Hawai’i University’s Distinguished Scientist award for work on Cloud Forest Conservation (2004); the King Albert Gold Medal for Mountain Conservation Leadership (2004); and Honorary IUCN Membership (2008).

No record of Larry’s achievement would be complete without reference to Linda. They were a team, for example collaborating closely in producing the newsletter. At CNPPA/WCPA Steering Committee meetings, Linda would be quietly sitting at the back of the room, but always engaged and a source of wise insights. They travelled together on holiday and work to the remotest corners of the globe – and made marvellous travelling companions, and guests, with their boundless curiosity.

Linda and Larry made their home in the small rural Vermont community of Charlotte. This was a joy to visit – even their cat seemed to co-habitat happily with the chickens they reared and the wild birds that came to their window.  Here, having thought globally, Larry acted locally: he was proud to be the local tree warden. His contributions as Vermont Nature Conservancy Trustee were so significant, that they named the trail in the local TNC forest preserve the “Hamilton Trail”. He learnt of this last award with delight just two days before he died.

I will mourn Larry as the warmest of friends and the best of colleagues.

* I gratefully acknowledge the help I received from Graeme Worboys in writing this obituary.