New masculinities: “I have made a change in my life and I try not to repeat what I did before” 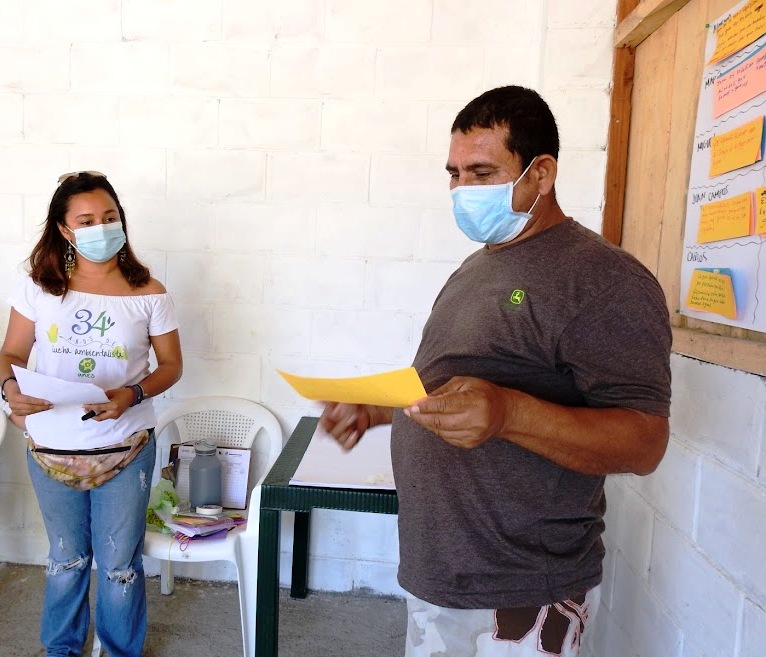 Juan Antonio, husband, father, and grandfather, from the village of Los Limones, Jujutla, Ahuachapán, shares that he changed his mind that the kitchen was exclusively for women.  Now he says that he has learned to make tortillas and that the household chores are a shared responsibility with his wife.

IUCN studies affirm that incorporating a gender perspective in environmental projects is key to contributing to the elimination of violence against women.

This type of violence translates into the existence of unequal gender power dynamics in the ownership, access, use, and distribution of the benefits derived from natural resources.

“Now I'm a different man," says Juan Antonio Guardado Menjívar, a 50-year-old Salvadoran from Barra de Santiago, during one of the workshops on new masculinities promoted by USAID's Regional Coastal Biodiversity Project. He says the initiative changed his life.

“I grew up with my dad. He told me things like ‘the kitchen belongs to women."That stuck in my mind, but over time, I have made a change in my life. I respect and I know what a woman is worth and what a man is worth, that we are both worth the same." Now, I value my wife's work and we live an excellent, quiet life. This has greatly improved my family life.”

This is how Juan Antonio expressed the impact that USAID has had on him, how he has had to unlearn gender issues, and how he has learned about new masculinities in marine-coastal areas of high biodiversity sites in Central America, communities where "machismo" traditionally prevails.

These community spaces for reflection on gender roles have been made possible through the implementation of the Regional Coastal Biodiversity Project’s gender strategy, developed with the support and accompaniment of the Advancement of Gender in the Environment Initiative (AGENT), an alliance between USAID and IUCN.

Like Juan Antonio, thirty men from the Probosque Association, the El Aguacate Micro-Watershed Committee (ACMA), and the Flora and Fauna Protection Committee of the Metalío Canton (ASPROFEMA) in El Salvador successfully completed the "Training School on New Masculinities."

Forty-four men from the three project sites in the Muskitia, Motagua, and Río Paz validated the manual "Nonviolent Masculinities in Sustainable Fishing Contexts in Central America." This process complements the training provided to women's groups to "Weave a Network to Prevent Gender-based Violence in coastal marine areas" in El Salvador, Honduras, and Guatemala.

Through the regional strategy to prevent gender-based violence and enable new masculinities, the Regional Project strengthens gender equality in the conservation and sustainable use of nature, as well as in the governance spaces of coastal marine resources, essential to improving the quality of the livelihoods of local communities.

The Regional Coastal Biodiversity Project is an IUCN-led initiative, implemented in consortium with Goal and five local partners, in three sites with high biodiversity in Central America, with support from USAID.