A Place to Call Her Own: Land titling and gender-based violence in South Kivu, DRC

In the South Kivu province of the Democratic Republic of Congo (DRC), there are no female chiefs or heads of wards across the 40 villages in Walungu. The low level of representation in these leadership spaces means that women face an uphill battle when it comes to accessing land rights. 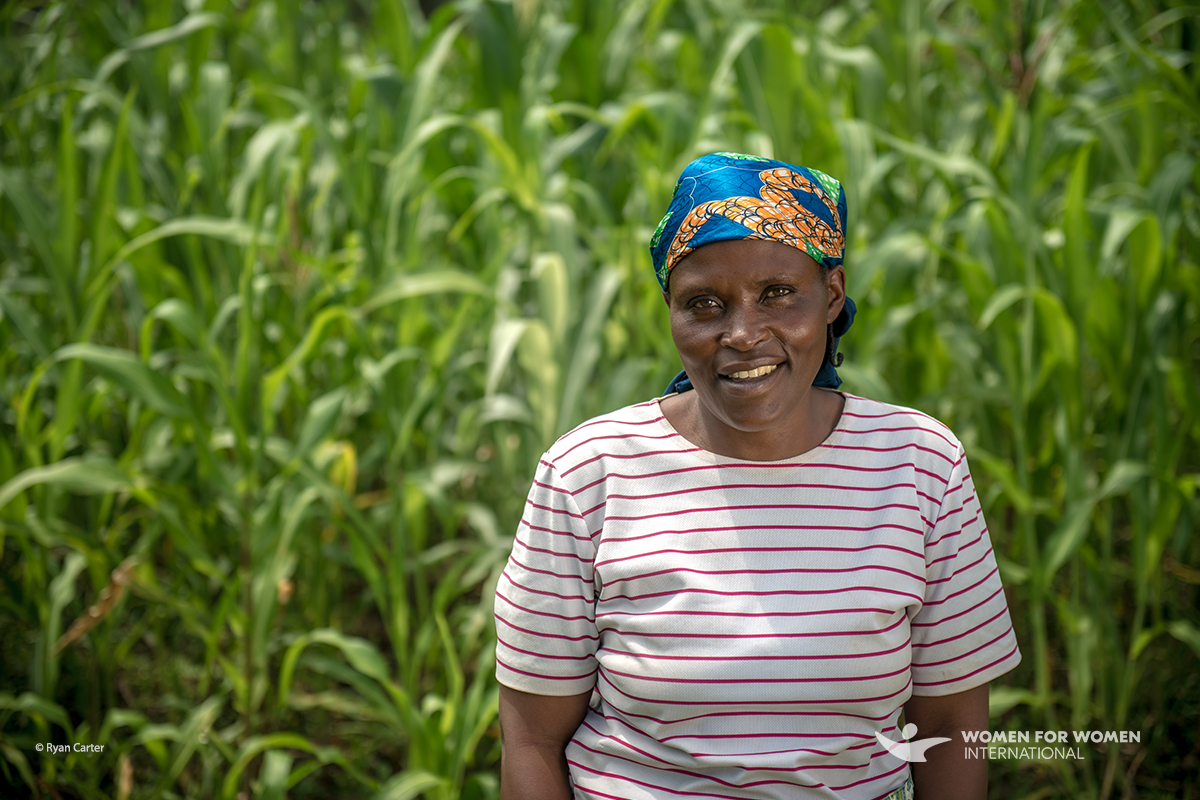 A woman stands in front of her fields in DRC.

All our lives is a humiliation - they never allow us to go to school. When you get married, you are the thing that the husband brings home. He expects you to do A, B, C - and if you don’t do it, he will get another wife.

Across the globe, research indicates that gender-based violence (GBV) is used to control gender roles and norms while enforcing and protecting existing privileges around natural resources. In The Violence of Inequality, a study by the International Union for Conservation of Nature (IUCN) commissioned by the United States Agency for International Development (USAID), research found that the deprivation of land rights can be employed as a form of economic gender-based violence, as it results in women depending on male relatives for land security and having limited means to leave or influence situations of violence.

Women have no land, no country.

This link between rights, decision making, resources, and safety is further strengthened by the fact that access to loans, credit, and agricultural productive assets and resources are often all connected to land titles as a form of equity.1 And evidence indicates that improved land rights for women and men can increase sustainable and resilient agricultural productivity.

In Walungu and nearby Nyangezi, Women for Women International (WfWI) is partnering with Innovation and Training for Development and Peace (IFDP) to adapt existing GBV interventions to address land rights access for women made vulnerable by these interlinked issues. Funded by USAID, the work is a part of a global grant challenge on Resilient, Inclusive, and Sustainable Environments (RISE), inspired by IUCN’s research, to address GBV in environmental programs. As a part of the project, 138 women from local households have responded to surveys while a further 20 men and 36 women engaged in focus group discussions to shed light on how GBV and land rights impact women’s rights and identify ways forward.

An analysis of these engagements reveal that while 22% of women have access to land—mainly through vulnerable leases, only 11% have control over the land and just 14% have control over deciding which credit services and opportunities to use. In these households, respondents reported that men make 91% of all household decisions, from when household purchases are made, to land purchase, to schooling decisions for children, to expenditure of income from crop and livestock sales.

I would rather put my son’s name on the land title than my wife’s name.

The DRC is a signatory of the Convention on the Elimination of All Forms of Discrimination Against Women (CEDAW) and its Constitution affirms that women and men “are born free and equal in dignity and rights” and are “equal before the law and have the right to equal protection by the law”. The country has also amended family and land laws in order to strengthen gender equality. Yet, the data shows that practice has not yet caught up with these commitments.

In places such as Nyangezi, statutory law is ignored and, in practice, women and girls do not inherit land due to son preference. A respondent shared, "My father had a lot of property when he died. My brother, who inherited it all, sold everything. I received nothing. I wonder if all the girls had experienced my same situation."

As men control decision making in households, women having control over resources such as land titles is regarded as taboo. In addition, polygamous practices also present challenges to women’s decision-making roles and opportunities, as a woman’s status within her household can become a source of tension. One male respondent shared that, “a woman with land under her name is dangerous—I will never allow my wife to be friends with her.” In fact, communities reported that domestic violence can take place in front of family members and children as a means to enforce “discipline” over wives. 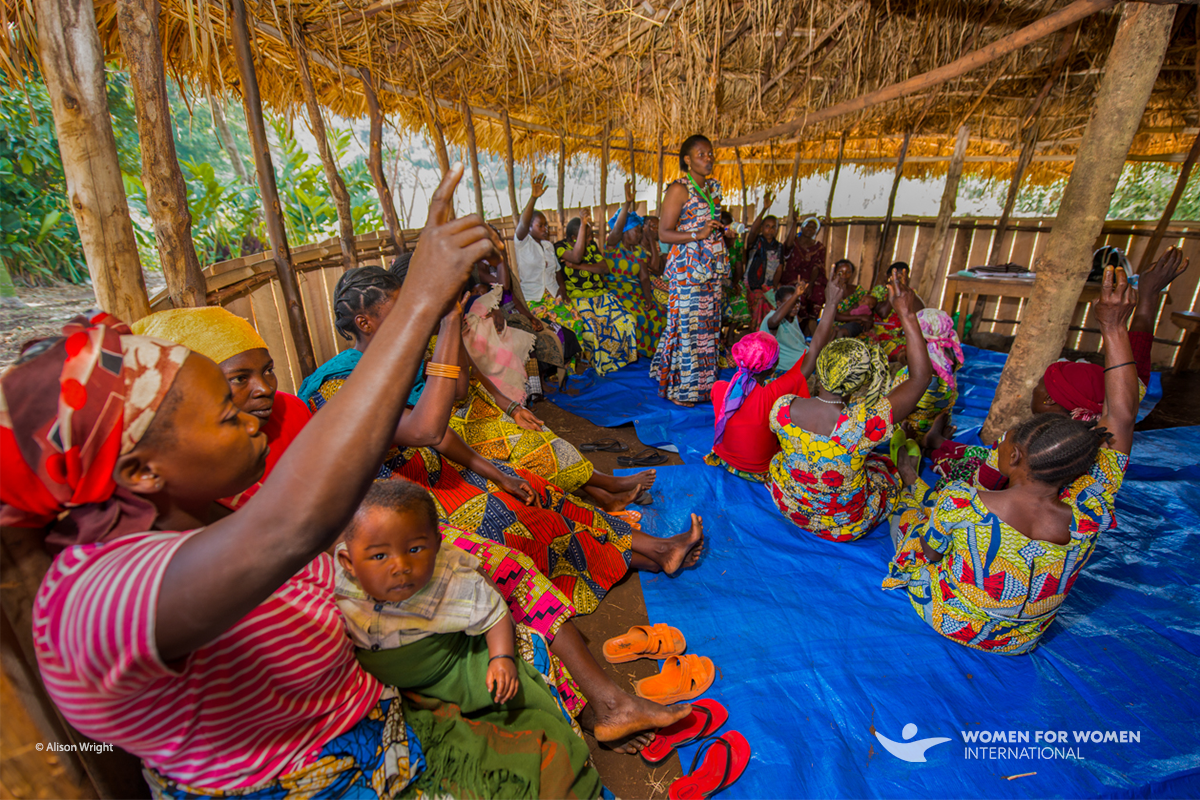 In the community, they say that ‘women cannot buy or own land’, but I bought it and women see me as a strong woman. – Furaha

Despite the challenges to land title rights and decision making, women in  South Kivu are defying expectations. Furaha joined the WfWI’s Change Agent program2 and combined one year’s worth of savings from her village savings loan association (VSLA) with a loan from a friend and small business profits to buy land from a male neighbor. He agreed to the sale and provided a binding << acte de vente >> that proves Furaha’s land ownership, which came in handy when another neighbor tried to steal the property from her.

Similarly, Gorette also used a loan through her VSLA and the WfWI Change Agent program to save funds and was able to buy land after one year, and land titling has enabled her to apply for loans to reinvest in agricultural outputs.

In Nyangezi, Naluhondo was a pioneer. Many years ago, as an unmarried woman, she focused on saving and investing in land. This decision proved to be important: after she married her husband, Naluhondo bought more land, which her husband sold without her consent. The land they live on today is that which she bought all those years ago before she married, and as the sole title holder, no one but Naluhondo can sell her home or land.

Yet, these success stories were not without additional challenges: in Furaha’s case, her husband wanted her to buy the land but to register it in his name. When Gorette made her plans to buy land, some family members wondered if it was because she was planning to leave her husband or if she planned to buy the land for her children from a previous marriage.

In each story, the seeds of change are apparent. For Naluhondo, though rare, women landowners were frowned upon in the past, and she senses that other women have regretted not following in her steps. For Furaha, despite the challenges with him, her husband agreed that the arrangements she made were beneficial for their children and she remains the land title holder. And for Gorette, she did not consider any barrier presented by the community to be insurmountable as she had the full support and agreement of her husband.

There is also hope for the future. Furaha has three sons and two daughters, and, to date, she has already purchased land for her eldest child and plans to continue buying land for all her children to ensure they each “have a land to live for their own with their own name on the documents.” Due to land titling, Naluhondo has also been able to fend off attempts from neighbors to grab her property while Gorette has noted that women with land titles have grown their resilience and autonomy. 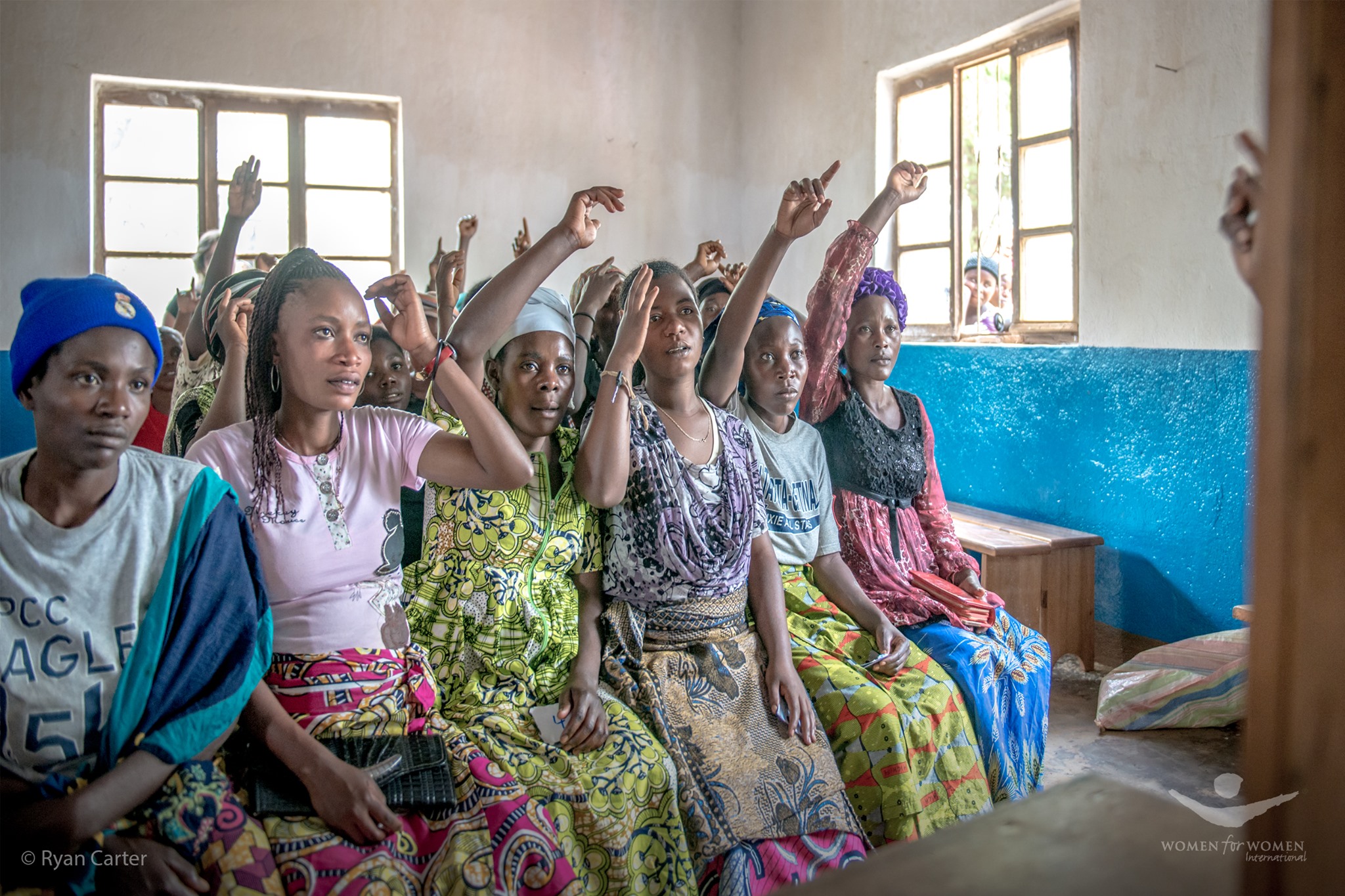 Once a woman becomes economically empowered, you contribute to household revenue and you are more valuable. – Gorette

Insights from women like Furaha, Naluhondo, and Gorette have helped WfWI and IFDP identify that engagement with community leaders and men will play a central role in their project to ensure that women and men—including community leaders and male allies—can address and transform attitudes and beliefs about land ownership. In the coming months, WfWI and IFDP will train male allies as a part of a men’s engagement program. In target communities, the training will encourage reflections and challenge men to change normative barriers to women owning and controlling land, while also working with women and men alike to better understand and address GBV and land rights linkages.

When asked what each woman would like other women, men, and community leaders to know about women’s land ownership, each woman had her own message to share:

What I would advise other women is to make little savings so that they may be able to buy and own land. Because I believe if I bought land, other women can as well. For men: I would ask them to stop selling their family (household) land without consulting their wives but buy more land rather than trading for beer (selling land then finish the money drinking). For community leaders: I would ask them to protect women’s properties. – Furaha

I can tell other women to always save because this allows women to be economically independent, which makes you more valuable and respectable in front of men, with  households and communities. I will ask men to support their wives and women in the community since it contributes for the development of household and family and also it gives respect to women. Community leaders should also support women initiative and collaborate with them. – Naluhondo

What I can tell other women in the community is to work hard and become economically empowered which will give them values and they can also buy their own land because if they still depend on men providing everything, they will remain discriminated against. For men I would advise them to allow their women to do their business freely and support their effort. – Gorette 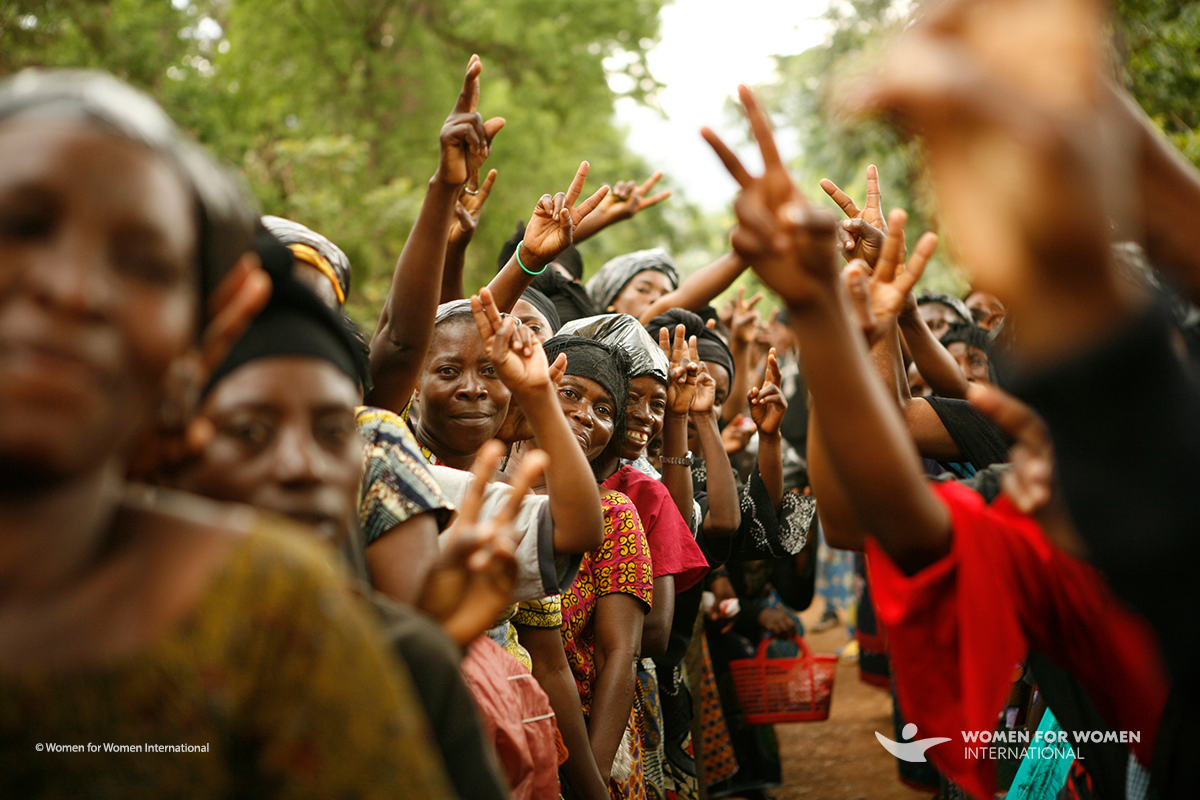 This story originally appears at the GBV-Environment Linkages Center hosted by IUCN under its Advancing Gender in the Environment (AGENT) partnership at https://genderandenvironment.org/agent-gbv-env/. It was developed by the International Union for Conservation of Nature (IUCN) with inputs from Women for Women International (WfWI). Quotes were shared by household participants engaged in the project who have provided consent for publishing and were collected by WfWI. All photo credits in this story belong to WfWI. For more on RISE, please visit https://competitions4dev.org/risechallenge.

Advancing Gender in the Environment (AGENT) 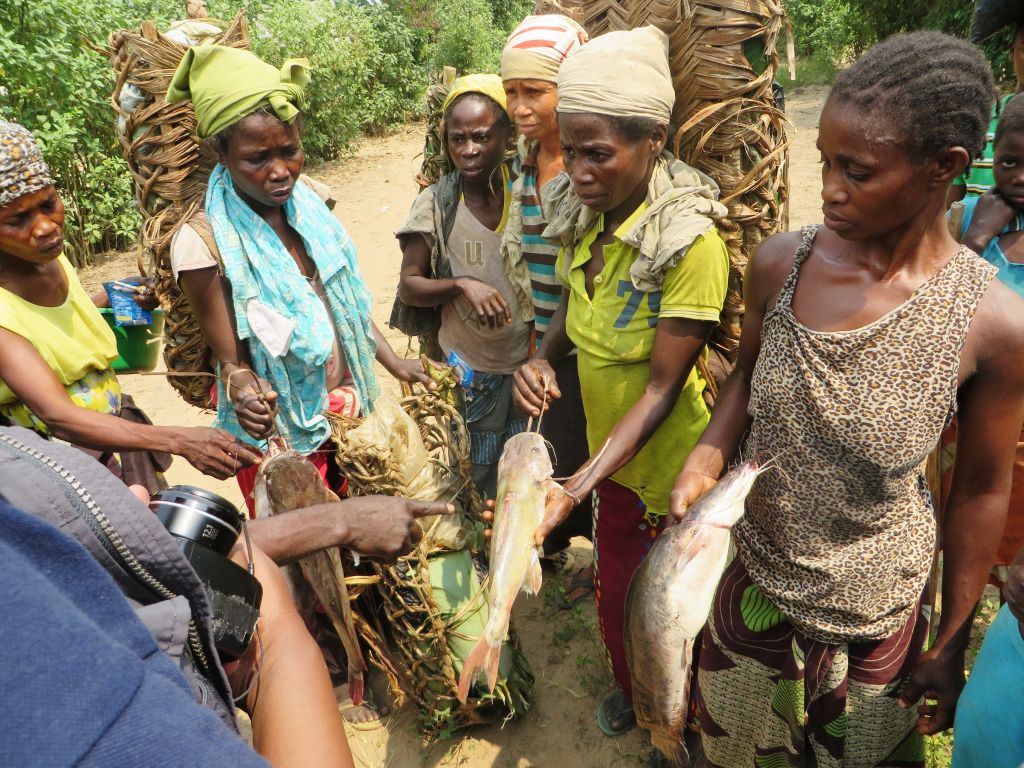 Story | 22 May, 2019
Restoration opportunities in the heart of DRC 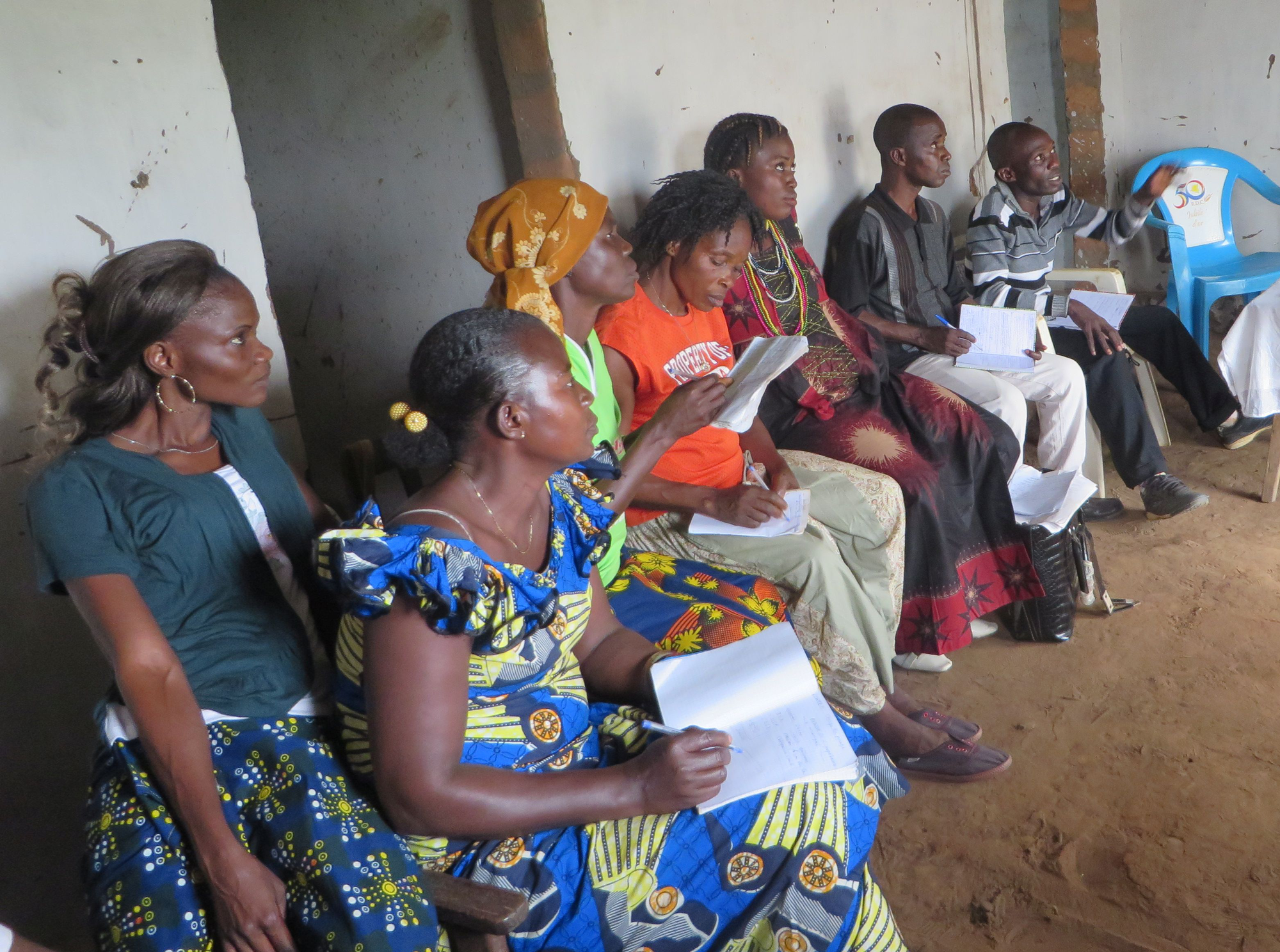 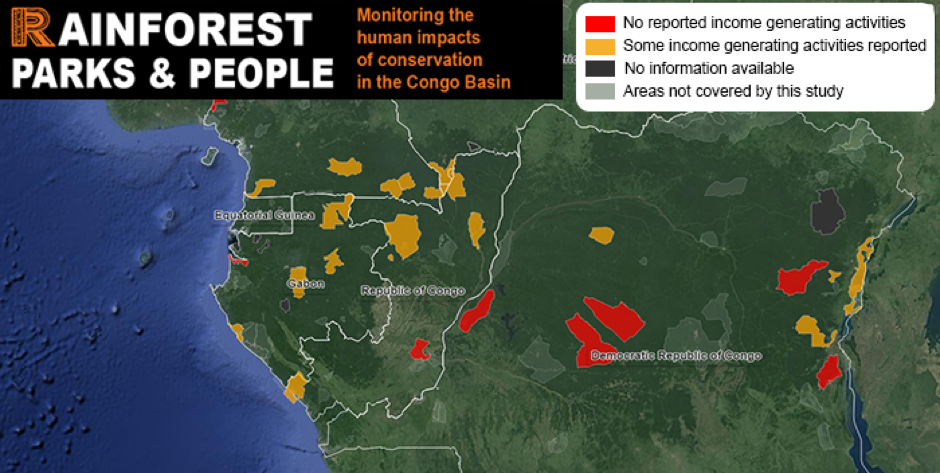