Mangroves support rich biodiversity and high levels of productivity, supplying seafood at capacities large enough to feed millions of people. Fisheries and other sectors, economies, and communities around the world will only be sustained through the restoration and protection of mangrove forests. 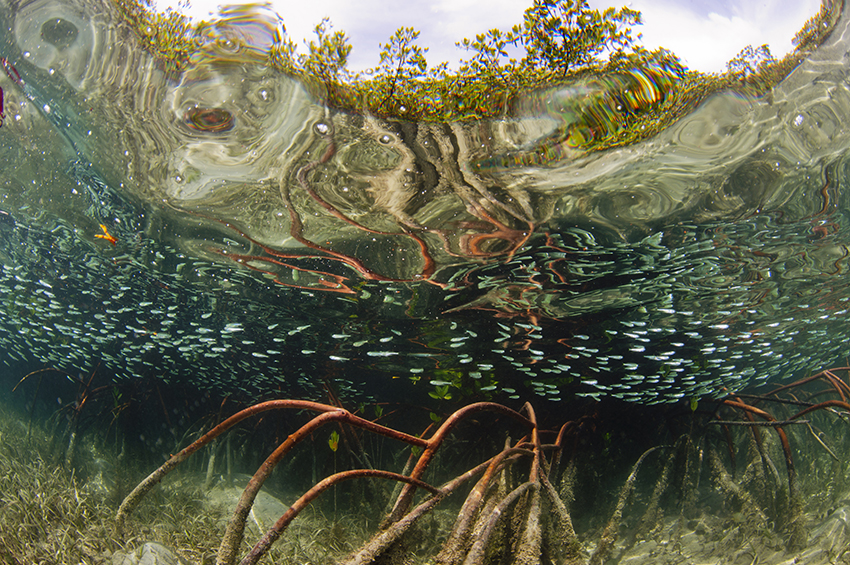 Mangrove forests are structurally diverse ecosystems, sustaining high biodiversity as well as rich seafood supplies. Partly submerged in the ocean, mangroves form a tangled web of above-ground roots, creating a unique and complex habitat for all sorts of marine life. These species are attracted to mangrove forests for the high food availability, cooler water with higher oxygen content and the refuge they provide.

Numerous marine species, including fish and shrimp, use mangroves as nurseries during early life stages. An accumulation of , bacteria and mangrove tree detritus provides plenty of food for growing youngsters and, hidden in the thickets of the mangrove roots, juveniles are more likely to avoid predation from larger animals. When the mangrove refuge is no longer required, these animals venture out into the adjoining reefs or the open ocean. In this manner, mangroves act as a critical source to replenish some of the ocean’s fish stock.

Mangroves act as nurseries for two widespread fish species listed on the IUCN Red List of Threatened Species - the charismatic rainbow parrotfish (‘near threatened’) and the economically valuable and thus overexploited goliath grouper (‘critically endangered’). The rainbow parrotfish, the largest herbivorous fish in the Atlantic Ocean and the Caribbean Sea, depends on mangroves as well as coral reefs to complete its life cycle. The disappearance of adult populations from the world’s coral reefs can be explained by the similar disappearance of the world’s mangrove stands. The goliath grouper remains in its mangrove nursery for up to six years, only leaving once it has reached about one meter in length. Scientists have been able to directly link offshore abundance (or lack) of the adult fish with the abundance (or lack) of mangroves. It is evident that conserving mangroves will be essential to the persistence of both species.

Mangroves contribute to a significant part of our highly valued seafood resources. Over 200 million people live in areas within 10 meters of sea level and around mangrove forests. Many of them benefit from mangroves for food supplies and commercial activities. This is particularly true for poor and vulnerable communities whose livelihoods depend on the bounty of mangrove forests. The large diversity of seafood ranges from crabs, shellfish, oysters and snails to octopus, sea cucumbers, sea urchins and fish, many of which are permanent residents within the mangroves and can be directly harvested from within.

Commercial fisheries also depend on mangroves for some of their high-value species caught offshore. What scientists can show for the goliath grouper is the same for fish and blue crab in the Gulf of California: the higher the local abundance of mangroves, the larger the landings of commercial catches. With a median economic value of US$ 37,500 per hectare of mangrove fringe in these areas, the destruction of mangrove habitat will have a highly negative economic impact on fisheries, among other economies and communities. And we know that this is a global reality. Fisheries worldwide would profit enormously from the conservation and restoration of mangrove forests.

An initial model showing the value of mangrove fisheries worldwide was generated in 2014. These maps can be further explored at the Atlas of Ocean Wealth. The Nature Conservancy (TNC), one of IUCN’s members and project partners, is now completing work on a more detailed model which will map out the mangrove dependency of individual species. This work will feed into the joint IUCN and TNC effort to produce a global map with cutting edge analysis on the potential for, and challenges to, mangrove restoration, funded by Germany’s International Climate Initiative.

The international community is also mobilising to reverse the loss of critically important mangrove habitat worldwide. Recently, the Global Mangrove Alliance (GMA) was formed by some of the world’s biggest nature conservation organisations, including IUCN, with a goal to expand the world’s mangrove habitat 20% by 2030.