Almost a third (31%) of all lemur species in Madagascar are now Critically Endangered – just one step away from extinction – with 98% of them threatened, according to the latest update of The IUCN Red List of Threatened SpeciesTM. This update completes a revision of all African primate assessments, concluding that over half of all primate species in the rest of Africa are under threat. 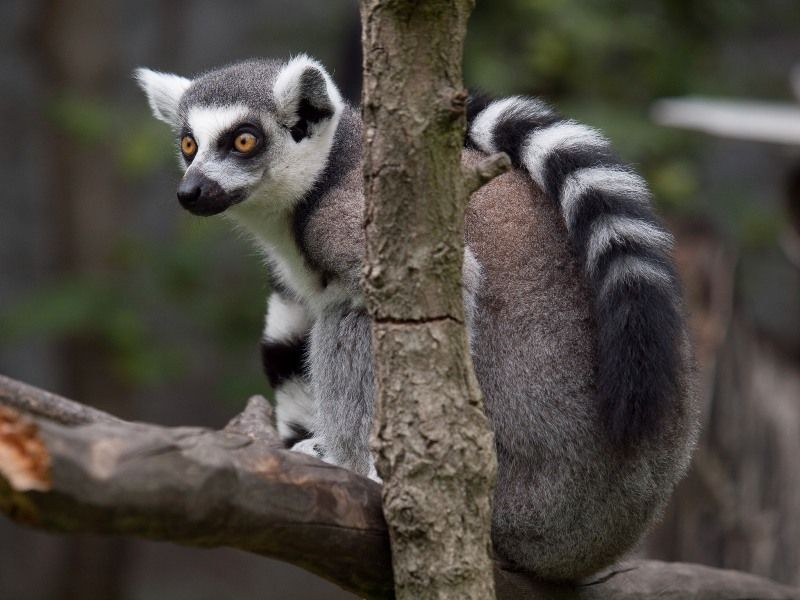 The ring-tailed lemur (lemur catta) is listed as Endangered on the IUCN Red List. This lemur is found in the dry forests, spiny bush, montane forest, mangroves, rocky outcrops, and one rainforest in southern and south-western Madagascar, and in one humid forest in south-eastern Madagascar. Despite the species' large range and flexibility, its population density is often very low and populations are largely restricted to isolated forest fragmentsExperts suspect that its population has declined by at least 50% over a three-generation period. 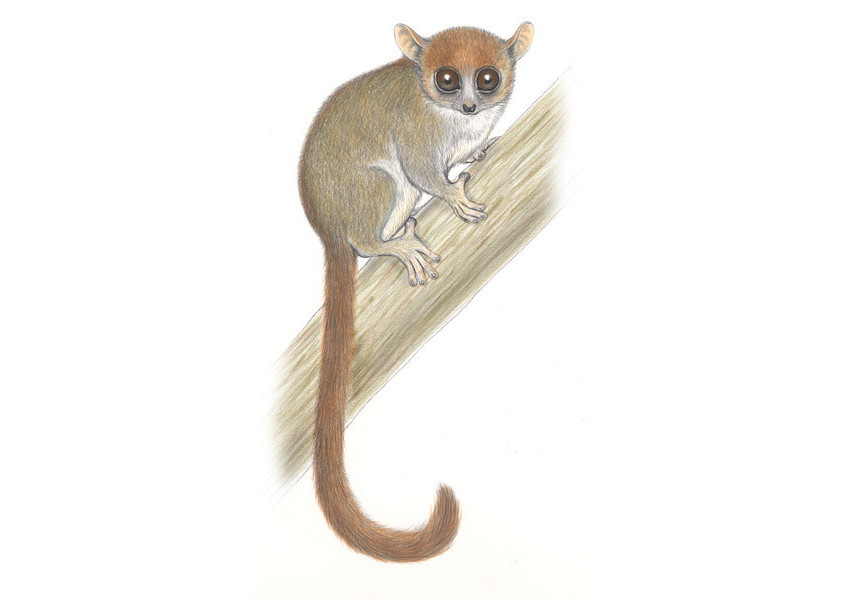 “This IUCN Red List update exposes the true scale of threats faced by primates across Africa. It also shows that Homo sapiens needs to drastically change its relationship to other primates, and to nature as a whole,” said Dr Grethel Aguilar, IUCN Acting Director General. “At the heart of this crisis is a dire need for alternative, sustainable livelihoods to replace the current reliance on deforestation and unsustainable use of wildlife. These findings really bring home the urgent need for an ambitious post-2020 biodiversity framework that drives effective conservation action.”

Almost a third of lemur species on the brink of extinction

Today’s update shows that 33 lemur species are Critically Endangered, with 103 of the 107 surviving species threatened with extinction, mainly due to deforestation and hunting in Madagascar. Thirteen lemur species have been pushed to higher threat categories as a result of intensifying human pressures. Among those newly listed as Critically Endangered are Verreaux’s Sifaka (Propithecus verreauxi) and Madame Berthe's Mouse Lemur (Microcebus berthae), the smallest primate in the world, both of which were previously listed as Endangered. These species are undergoing substantial declines as their forest habitats continue to be destroyed through slash and burn agriculture, as well as by logging for charcoal and fuel wood. Hunting further threatens Verreaux’s Sifaka, despite being illegal and regarded as taboo or ‘fady’ in many parts of its range.

Elsewhere in Africa, an estimated 53% of primate species (54 of 103) are now under threat of extinction. This includes all 17 species of Red Colobus, making it the continent’s most threatened genus of monkeys. Among the primates changing to a higher threat status today is the King Colobus (Colobus polykomos), a monkey living on Africa’s west coast, which has gone from Vulnerable to Endangered. Hunting for bushmeat – much of it illegal – and habitat loss continue to pose the most urgent threats to primates across the continent.

“Thanks to a very successful IUCN Lemur Conservation Strategy developed by our IUCN SSC Primate Specialist Group, we were able to raise over 7.5 million USD for the IUCN Save Our Species Lemur Initiative. With those funds, local organisations now work relentlessly to further ecotourism, to create new community-based protected areas, and to patrol, re-forest, and raise awareness in schools and local communities on the need to protect lemurs, Madagascar’s treasure. Although the situation remains very serious for the majority of lemur species, it is fair to say that some, such as the severely depleted Northern Sportive Lemur (Lepilemur septentrionalis), might already be extinct had it not been for this investment,” said Russ Mittermeier, Chair of the IUCN Species Survival Commission Primate Specialist Group.

The North Atlantic Right Whale (Eubalaena glacialis) has been moved from Endangered to Critically Endangered on the IUCN Red List. Fewer than 250 mature individuals were estimated to be alive at the end of 2018, the total population having declined by approximately 15% since 2011. This decline is being driven by a combination of increased mortality due to entanglement in fishing gear and vessel strikes, and a lower reproduction rate compared to previous years. Of 30 confirmed human-caused deaths or serious injuries of North Atlantic Right Whales between 2012 and 2016, 26 were due to entanglement.

Climate change appears to be exacerbating the threats to North Atlantic Right Whales. Warmer sea temperatures have likely pushed their main prey species further north during summer, into the Gulf of St. Lawrence, where the whales are more exposed to accidental encounters with ships and also at high risk of entanglement in crab-pot ropes.

The European Hamster (Cricetus cricetus), once abundant across Europe and Russia, has suffered severe populations declines across its entire range and is now listed as Critically Endangered on the IUCN Red List. Research has shown that the population declines are likely due to lowered reproduction rates. While a female hamster had an average of over 20 offspring a year during most of the 20th century, females today have been found to give birth to only 5 to 6 pups annually. The reasons for the reduced reproduction rates are not yet fully understood, but the expansion of monoculture plantations, industrial development, global warming and light pollution are being investigated as possible causes.

As a result, the rodent has vanished from three quarters of its original habitat in the French region of Alsace, from at least a third of its range in Germany, and from more than 75% of its range in Eastern Europe. If nothing changes, the species is expected to go extinct within the next 30 years.

The world’s most expensive fungus, Caterpillar Fungus (Ophiocordyceps sinensis), has entered the IUCN Red List as Vulnerable. This fungus is highly valued in Traditional Chinese Medicine, where it has been used for over 2,000 years to treat many diseases including those related to the kidneys and lungs. Demand for the fungus has risen sharply since the 1990s.

Caterpillar Fungus, which only grows on the Tibetan Plateau, parasitises the larvae of ghost moths while they are buried underground. It then grows through their bodies and emerges through the larvae’s heads to the surface, where it is harvested.

In the last two decades, the fungus has become the main source of livelihoods for thousands of people where it occurs. Caterpillar Fungus’ populations have declined by at least 30% over the past 15 years as a result of overharvesting.

“While conservation measures including hamster-friendly field management and reintroductions have slowed down the population decline in some areas, they have failed to reverse the trend,” said Dr Mikhail Rusin, an author of the new Red List assessment, member of the IUCN SSC Small Mammal Specialist Group and Head of the hamster restoration project in Kiev Zoo, Ukraine. “In addition to these measures, more research into the various possible drivers of the European hamster’s disappearance is urgently needed to save it from extinction.”

"This is one of the few documented cases of a fungus being threatened by overharvesting," said Prof Gregory Mueller, Chair of the IUCN SSC Fungal Conservation Committee. "Implementing a sustainable harvest program is needed both for the Chinese Caterpillar Fungus and for the long-term economic health of the communities that depend on it for income."

“Lemurs are firmly on the radar screen of conservationists, but further investment in their conservation will be required to reverse their decline,” said Prof Jon Paul Rodríguez, Chair of the IUCN Species Survival Commission. “The drivers of species loss are complex and powerful, so our response must be of a comparable intensity. In some cases, such as lemurs and Caterpillar Fungus, their threats are known and understood. In others, such as European Hamster, the picture is more uncertain. What is clear is that IUCN is ideally positioned to convene the experience and knowledge needed to bring species back from the brink. Inclusion in the IUCN Red List of Threatened Species is the first step of a process that systematically plans the best interventions linked to achieving successful conservation action. We know how to do it, we just need to do more of it.”

“Through IUCN Save Our Species projects we are addressing the main threats to the survival of lemurs such as slash and burn agriculture, illegal logging, as well as hunting and keeping lemurs as pets. We also work to support local communities to develop livelihoods that make sustainable use of natural resources,” said Ana Nieto, Head of IUCN Save Our Species. “With about 40% of Madagascar’s original forest cover lost between the 1950s and 2000, reforestation is crucial to protecting all species of lemurs. Since 2017, our projects have planted more than 2.7 million trees to improve lemur habitat across the island.”

“As the IUCN Red List surpasses 120,000 species, it becomes an even stronger Barometer of Life. The 4,260 animal, fungus and plant species assessments added to the Red List in this update, and the complete reassessment of all African primates, are essential to catalyse conservation action. Furthermore, this information will be important to inform the post-2020 Biodiversity Framework, guiding progress towards the Sustainable Development Goals,” said Masako Yamato, General Manager, Environmental Affairs Division of Toyota Motor Corporation.

The IUCN Red List: The IUCN Red List of Threatened Species™ contributes to the achievement of Target 12 of the 2011– 2020 Strategic Plan for Biodiversity. Target 12: By 2020 the extinction of known threatened species has been prevented and their conservation status, particularly of those most in decline, has been improved and sustained.

“The decline in Madagascar’s lemurs is directly linked to loss of habitat and native plant diversity. Recent red listing work carried out by the Global Trees Assessment shows that the dry forests of Madagascar are home to 982 species of trees, 90% of which are showing declining population trends, and 59% of which are threatened with extinction. These tree species are not only essential to wildlife, they also provide food, medicines, shelter and fuel to local communities,” said Paul Smith, Secretary General of BGCI.

“Included in this release are assessments from another megadiverse island, the island of New Guinea. Some of the same processes threatening lemur habitats in Madagascar: conversion to agricultural land, increasing fires and logging, are all drivers for the extinction of forest species on the other side of the world,” said Helen Chadburn, Species Conservation Assessor at the Royal Botanic Gardens, Kew. “Schefflera from the forests of New Guinea, relatives of the well-known household umbrella plant, have been assessed for their extinction risk. In New Guinea these species can form important components of the forest, and a third of these iconic plants are threatened or near threatened with extinction.”

"Today’s IUCN Red List update demonstrates the importance of protecting the diversity of life across the planet, especially groups like lemurs, which are extremely limited geographically making these species less resilient to habitat destruction,” said Sean T. O’Brien, President and CEO of NatureServe. “We need to protect our planet’s unique biodiversity and must seek out opportunities to utilise data, science, and technology to prevent the mass extinction event underway globally.”

“What an amazing global achievement to have over 120,000 species assessed, including many lesser known and overlooked species that provide critical ecosystem services underpinning human wellbeing. Although only assessing a fraction of the species that make up our natural world, the IUCN Red List acts as a barometer for life on earth. We must heed its warnings and take the bold steps needed to deliver a future where wildlife and humanity thrives,” said Dr Andrew Terry, Director of Conservation, ZSL.

Global figures for the 2020-2 IUCN Red List of Threatened Species: