A strictly private project of ecosystem restoration, the main feature of which is a successful rebuilt of native forest by active reforestation, complemented by a variety of restorative and protective measures, located in Region XI, Chile, where ecosystems were severely degraded by deliberate fires and further agriculture in the mid-XX century. 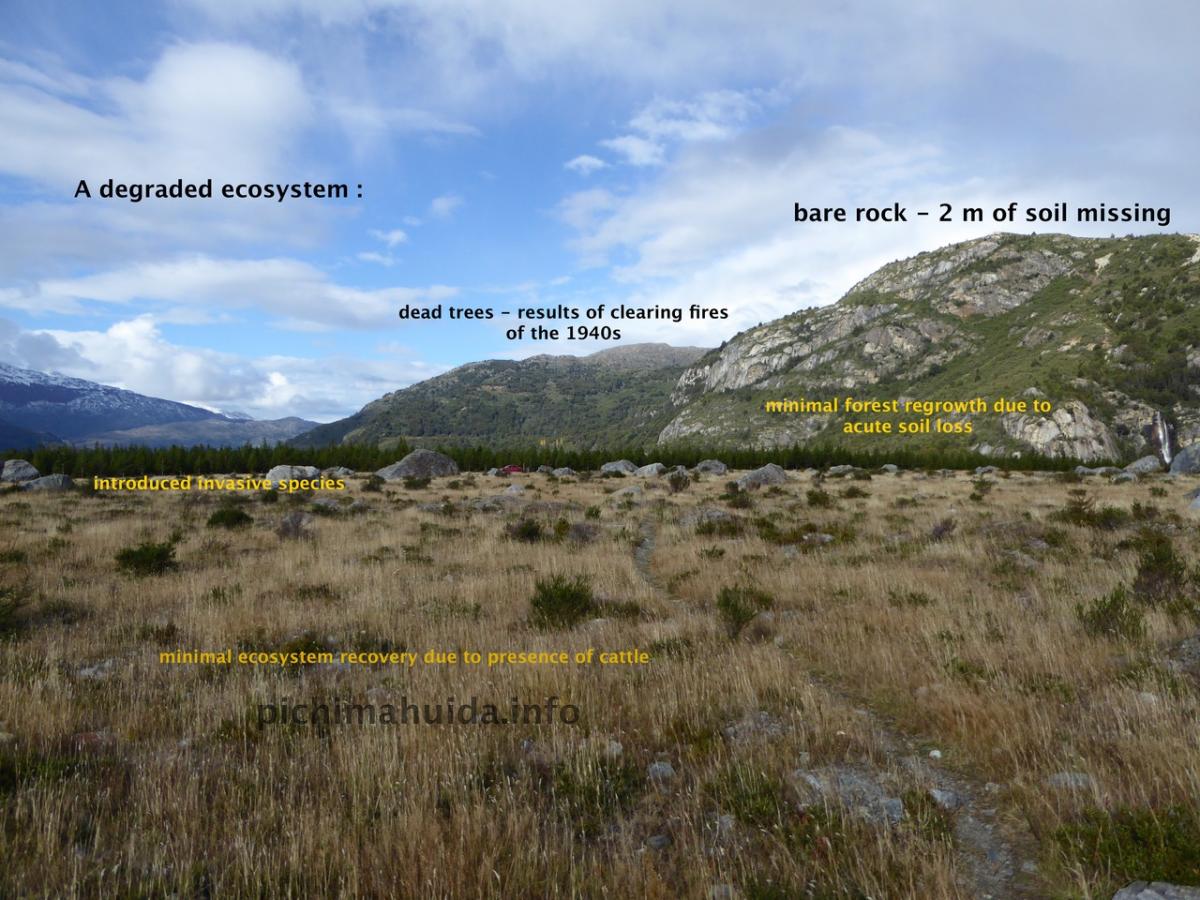 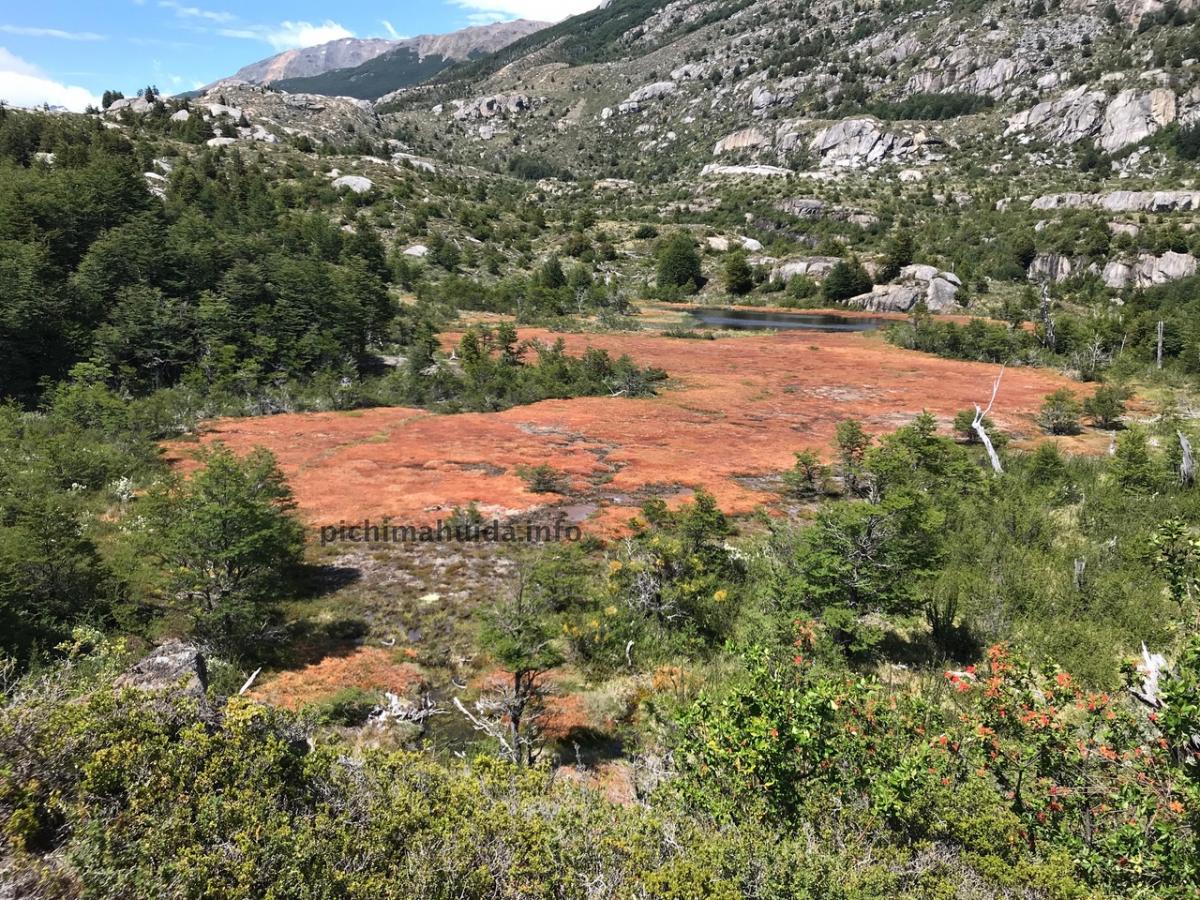 Photo 1 by Elena Sobakina: Severe ecosystem degradation of the area.  Photo 2 by John Whitelaw: A mountain wetland, restored by the project, with bare rock on the background - result of acute soil loss due to massive reforestation in mid-XX century, in Leones valley of Aysén region, Chile.

The setting: the ecosystems of Region XI (Aysén) of Chile were destroyed in the first half of XX century by deliberate fires and subsequent agriculture, exploitation and mismanagement.  It led to massive deforestation, desertification, biodiversity loss, acute soil loss, erosion - a silenced massive ecological disaster, in many places - beyond repair.

The project: a part of this destroyed land, approx. 1800 ha, was bought in 2006 and assigned a private protected area status. The land is adjacent to the Laguna San Rafael National Park, a biosphere reserve. A restoration project was designed, hands-on experience gained and added to the previous experience of the owners, acquired through long-term work in UNEP and other international and national environmental organisations. 14 years after the successes are evident and further challenges identified.

The main success is the programme of reforestation for native forest restoration. To date more than 250 000 native trees were planted, with average certified survival rates of 85-90%. Planting protocols are highly successful in re-establishing native tree species, are local nature-friendly, simulate natural mixed forest with its successions, planting is done by hand by professionals. Funding is mainly private and personal, some limited financial support is provided by CONAF (Chile's National Forest Corporation) under Chilean law 20283 on native forest. 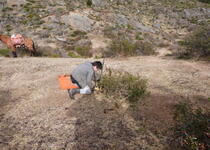 Photo: John Whitelaw.
All planting is done by hand, trees are taken uphill by horse, a mixed natural forest is rebuilt. Photo by John Whitelaw

Successful erosion control (active and passive reforestation, seeding of first colonisers, etc.), good natural regrowth, restoration of wetlands (demonstrated by return of a variety of migratory nesting birds), and actively returning wildlife and birdlife can be mentioned as achievements beneficial for the ecosystem and its biocenosis. The rebound of the ecosystem started vigorously after the removal of cattle present in the property.

The actual challenges include, with regard to reforestation, shortage in or high price of appropriate native planting material. In order to solve this problem, a seed reproduction facility is been set up, to be used mainly for material collected in the area.

Other challenges are: the urgent need for protection of the project and the ecosystem from the uncontrollable and unsustainable development of tourism in the area; control of invasive species, mainly introduced and numerous in the area, the most representative being the rosa rubiginosa;  ingression of cattle from the neighbouring areas including the National Park.

Some challenges are typical for the area, most are irrespective of national framework, but typical for a situation of using private property to protect the personal responsibility approach of the landowners for the land and its nature as the background for the project. As such, the perspective is different from that of an NGO, or other “external” players. Further, the challenges, financing and accountability are different from those faced by organisations, foundations etc.

Long-term legal protection is essential for private (not privately) protected areas and projects, in particular in the absence of national and local legal framework. As a first step in this direction contracts on In Rem right of conservation (Chilean law 20930 of 2016) were concluded and included in the land titles. Other solutions such as agreements on land stewardship are being considered.

The funding of the project consist only of private and personal funds, it does not benefit from any type of financial or other support with the exception of a small subsidy by CONAF. Some volunteers are now accepted to support the project.

As the location is remote and isolated, operational solutions had to be found to operate off-grid and with no support. These include development and installation of infrastructure that uses different types of small independent sources of energy supply for the effective operation of the project; installation of extensive sign posting in order to manage uncontrolled tourism and promoting the understanding of the state of the degradation of the ecosystems of the region. 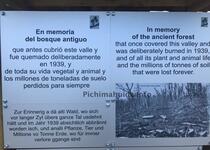 Photo: John Whitelaw
A sign posted within the project, a tribute to the killed ancient forest, a visual field illustration of the personhood of the devastated ecosystem

Socio-cultural aspects: Like the ecosystem, original indigenous communities were entirely decimated by the colonisation in the 1930s-1940s in the area. The land becoming increasingly unsuitable for any productive activities, only a sparse community of colons remained settled. Resentment to land restoration and land use changes is still quite present in their culture.

However, as the land was bought because it was irreversibly damaged, the operation of the project in such a devastated area led to increasing interest of the newly forming communities of settlers and landowners who see an urgent need in restorative land management and changes in land use. Thus, a neighbouring landowner donated 50,000 live trees to the project; the local forestry community is promoting and using protocols, developed by the project for local tree species; an internship programme for students in biology and land management of Universities of Valdivia, Coyhaique and Santiago was operating for several years; CONAF, the authority responsible for national parks, is considering the project as a valuable partner; the restorative potential of the previously abandoned land triggered actual fair prices for it; the valuation of the ecosystem by recognising its personhood, promoted by visual field information and the presentation of the project as a case study (www.pichimahuida.info) of our responsibility for the damage has a real impact on the visitors of the area: volunteers, tourists and other.

The private road and other facilities built for the project had a unfortunate side effect of opening the access to a sensitive nature area, including a melting glacier (glacier Leones), and thus triggered development of uncontrolled tourism, which nevertheless presents a good source of income for several local families.

The most helpful (not in the financial sense) communities were communities, international or national, of private landowners involved in similar activities, provided that challenges, successes and high potential of private land conservation of middle and small size are largely disregarded in meetings and support programmes. Nevertheless, there is a high potential for effectiveness and this approach could constitute an important resource for land restoration and conservation.