Transforming indigenous women’s lives through coffee and community in Bolivia

“We work arduously,” Mrs. Betty tells me over the phone. “For us, it’s hard, leaving our homes, leaving our children…My husband would ask, ‘How will you have the time? You have to cook. You have to clean’.” Yet she persisted, determined to make the arrangement work. “I’m not going to stop, am I? I’m going to move forward in what I want to do”. Against these initial barriers and resistance, Mrs. Betty has been working to provide a more sustainable future for her family and herself. This process, while challenging, has produced far greater benefits than just an added source of income—it has brought a deep sense of pride and fulfillment for Mrs. Betty while gradually transforming gender relations in her traditional community. 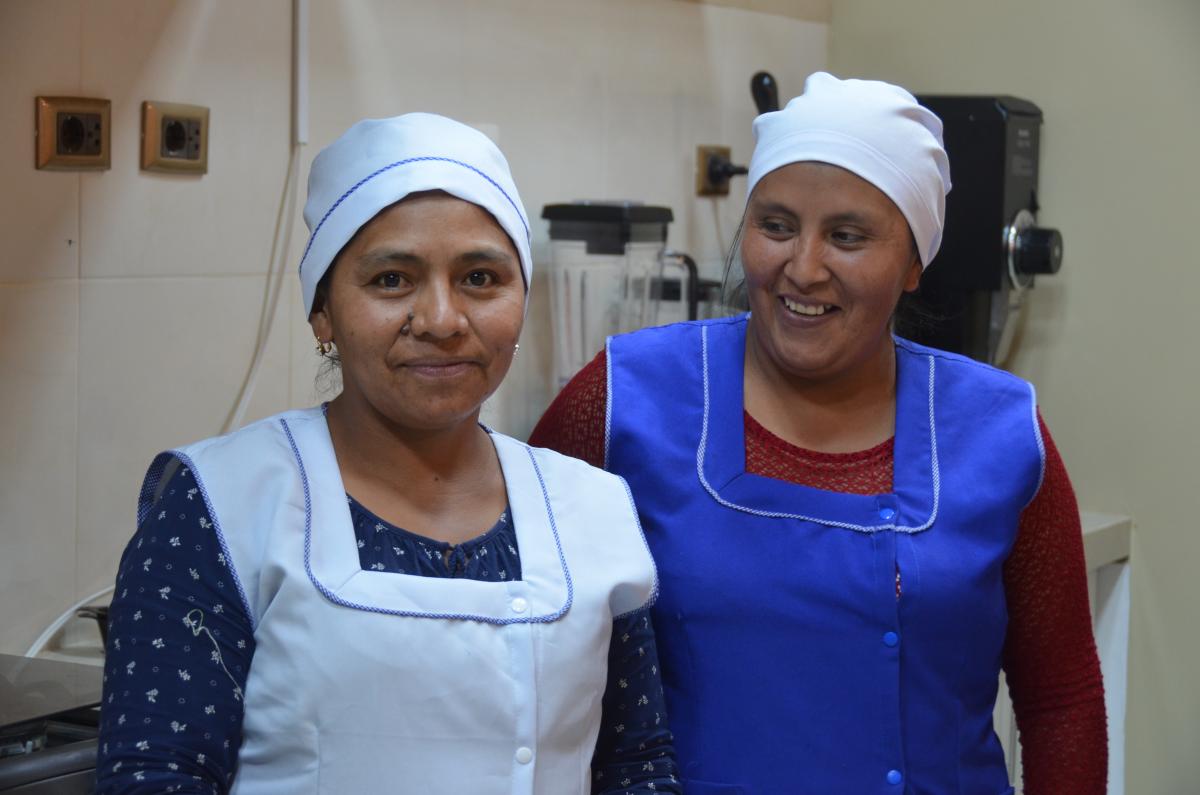 Mrs. Betty, left, and Mrs. Ana, right, both leaders of the Uniko Café

Mrs. Betty is a leader among a cohort of indigenous women taking part in a sustainable livelihoods project Conservation International is leading in her community, a town 12,500 feet high in Bolivia’s southern department of Potosí. Life as an indigenous woman in Latin America’s poorest country can be challenging. Within this arid yet remarkable landscape, beyond the poverty and scarce opportunities, women face the added burden that comes with living in a deeply patriarchal society. Being poor, being indigenous and being a woman yields triple hardship in a country such as Bolivia. The needs are urgent, expectations are high, and work never ends—whether in the household or beyond. For both men and women, bringing home some income is about survival.

People in the region are economically dependent on mining and producing quinoa, with some women also bringing additional income through artisanal jewelry making. Many are concerned with what the future will bring when jobs at the nearby Minera San Cristóbal (Bolivia’s largest mine) disappear when the mine closes in seven years.

Five hundred years ago, Potosí was one of the richest areas in the entire world, providing Europe with much of the silver that eventually precipitated the fall of the Spanish empire. Now, as the poorest department within the poorest country in Latin America, life for those in Potosí is a shell of this former abundant glory. The greatest constant over these past five centuries has been mining, which remains the economic engine in this predominantly indigenous region. Here, the average per capita income for a family like Betty’s ranges from $582 to $719, meaning that surviving on less than $2 a day—the threshold of extreme poverty—is the norm.

This region of Bolivia is also home to the world’s largest salt flats—the stunning Salar de Uyuni—located within a short distance from Betty’s community. The magnificent alien landscape that during the rainy season stuns with its glassy celestial reflection drew 300,000 visitors in 2016 and attracts more each year.

With the need for diversified and sustainable incomes quite evident, tourism is a source of great hope in this poverty-afflicted region.

As tourism grows, there is a need for infrastructure and services that can meet the demands of affluent cosmopolitan visitors, something that is currently lagging in Bolivia. Seizing on this opportunity, Mrs. Betty and her group have been learning to manage a café that will cater to the tastes of international visitors who often pass through the village on their way back from Salar de Uyuni. Though Mrs. Betty plans to continue making jewelry and growing quinoa while co-managing Café Uniko, she is not subdued in stating the significance of this opportunity for herself and her family: “Once the mine is gone, we are going to depend on the café”.

The women have been forming their group little by little, while gradually gaining the support of their husbands. This support was not always there, however, and it represents part of the challenges they initially faced.

For Mrs. Betty, the two biggest benefits of this project have not centered on the economic potential, rather the emotional and personal development gained through these experiences. The relationship between her and her husband, whom she lightheartedly acknowledges is “kind of machista”, has changed. “He was closed off before. Now there’s that support. This has been the most radical change I’ve had in my life,” she says.

Business management and hospitality training has been coupled with discussions aimed at bringing the women and their husbands together to gradually understand gender roles and associated challenges. Understanding what gender means and how gender expectations shape women’s and men’s daily reality was a revelation. Initially, few husbands attended these workshops—no surprise considering that the word gender in Bolivia is often linked to negative connotations related to feminism. Most people, according to the project’s gender specialist Rosa Alarcon, incorrectly understand gender and feminism to mean women’s intent to exert control over men. Yet as more women joined the group over time, more of their husbands began attending these meetings too. The men’s support was a great source of motivation for many women given the challenges they faced in balancing domestic expectations with this additional work on the business.

The second major benefit of the project Mrs. Betty noted is the comradery that has formed among the women of the group. Before the program, she and the other women knew each other casually, sharing the polite pleasantries that one extends to a passing acquaintance at school or at the market. Now, they are closer than ever before and have forged a bond that is quite exceptional.

The experience of having lived through this program together—meeting four to five times a week—and the knowledge of what lay ahead bonds them in a unique way. They rely on each other and will continue to do so for years to come as they co-manage the café, an endeavor that will bring them stability and, as suggested by Mrs. Betty’s tone, personal fulfillment. Indeed, it’s more than the relationships between these women that have developed—how they view themselves has also changed. Before the program, “some were reserved, some were shy. Now they are different women. Now they know how to express themselves in public. Before, they were afraid,” exults Mrs. Betty with an increasingly self-assured tone. “It’s very beautiful…. I don’t have words. I have a lot of gratitude on behalf of myself and my friends. We have developed ourselves.” 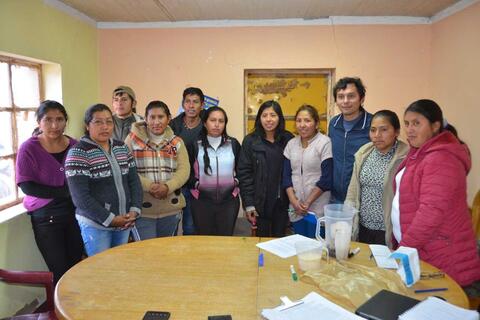 Though the project’s intention was to bring sustainable, alternative livelihood opportunities for women and men at a pivotal time in this mining region, its impact has gone far deeper. For Mrs. Betty and the other women in this small corner of Bolivia’s historic mining region, the project has brought unanticipated changes to their lives. In just a year, it has helped to transform a taboo subject like gender inequality into something that women and men in the project understand as source of disparity in their lives, and it has helped transform some of the structures that have been around longer than the region’s mines.

Now that the project is coming to an end, Mrs. Betty eagerly awaits what lays ahead for the group’s future. There will undoubtedly be many challenges to content with, but Mrs. Betty’s hope and enthusiasm inspire deep confidence. “The project is ending but it has left good fruits. We are going to know how to work this café. This is going to work. We won’t let them down in the support they have given us. We are going to work, always united,” she says with fervent conviction—the kind that instills you with a deep certainty of something that has so much promise it will unquestionably unfold.