After more than 6 years of intense meetings and negotiations, 24 countries of Latin America and the Caribbean (LAC) have adopted in San Jose, Costa Rica, the "Escazú Agreement", also known as Agreement on Principle 10. It is one of the most important environmental human rights agreements of the last twenty years.

This multilateral instrument seeks to effectively guarantee the rights of all inhabitants to access public information, to guarantee the possibility that the population is consulted and participates in the decision-making process that may affect their quality of life or the right to enjoy a healthy environment, and also to have direct mechanisms to access justice in environmental matters. 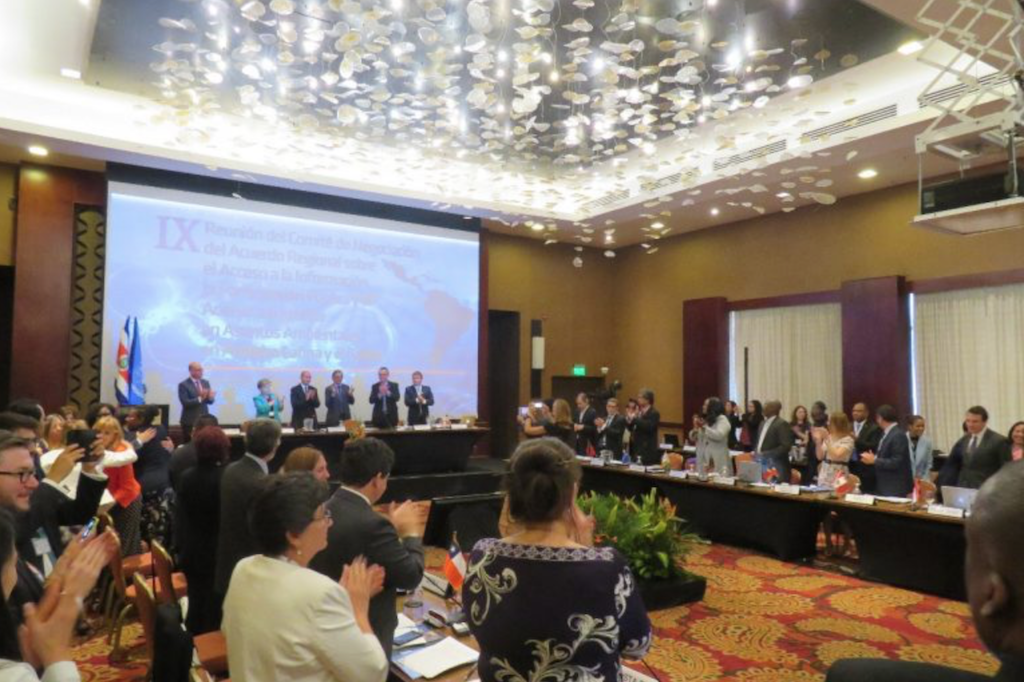 The Agreement is the first adopted by a group of countries in Latin America and the Caribbean on environmental matters, and was built and negotiated with the direct and significant participation of representatives of civil society organizations from various countries of the region. FARN was one of them.

The Agreement, which is binding, that is to say of mandatory application for those countries that ratify it, includes many provisions to guarantee access to information, participation and access to justice in environmental matters, as well as the recognition of fundamental environmental law principles such as the "Precautionary", "Prevention" and "Non-Regression" principles which prevents countries from repealing the guarantees and rights recognized by the Agreement.

Moreover, the Agreement contains an express guarantee of protection for environmental defenders, those working for the protection of human rights and the environment. It is the first time such recognition is included in an international treaty of a binding nature and arises in response to the critical situation that defenders face in Latin America and the Caribbean. In this regard, the Global Witness 2017 report (*) noted that 200 environmental and land defenders were murdered throughout 2016 in 24 countries around the world.

Thanks to the Escazú Agreement the legislation of countries in the region will evolve, particularly those which still do not have effective tools for the defense of the environment, and which are often affected by large-scale infrastructure initiatives, natural resources extraction and exploitation projects or the consequences of pollution.

The content of this Agreement will also provide tools to those countries that have a greater legislative development, as it is the case of Argentina, and focus on improving the implementation of its norms and compliance with the previsions that allow the population access to information, participation in processes such as Environmental Impact Assessments, and control over the compliance of decisions adopted in environmental matters with the possibility of accessing justice.

Countries ratifying the Agreement cannot make reservations to a part of its text, which provides a high level of robustness to the provisions contained therein.

In addition, instances such as the Conference of the Parties and a Committee to monitor compliance by countries will be established.

The Agreement will enter into force once 11 of the 33 countries that comprise the Latin American and Caribbean region have ratified it. States can start doing so from September 27, 2018, when the text becomes open for signature at the UN headquarters in New York.

"The Principle 10 Agreement is historic in terms of consolidating environmental democracy. It is the first that establishes protection clauses for environmental defenders, effectively guaranteeing the protection of the environment and people´s quality of life. It is very important that Argentina ratifies it as soon as possible, thus becoming a leader of this process," said Andrés Napoli, Executive Director of FARN.