The spirit and practice demonstrated by communities in local resource management and community conserved areas in the Pacific has been translated to ocean scale using the same basic principles – fostering a strong community of (certain) island countries with a shared vision combined with clear and cleverly used rights over marine resources (provided under the Law of the Sea) has enabled lesser developed SIDS in the Pacific to exercise stewardship over migratory tuna stocks and in the process increase the returns 8 fold to countries to nearly half a billion dollars per year.

Other parallels between the two scales of management include the importance of proactively pushing the limits particularly where current formal management regimes are failing. The potential demonstrated at small scale by ICCAs and LMMAs may well be near limitless.

I am here today in part because of the diligence of the organizers and also sponsors and donors to whom thanks is due but also and principally because I have been fortunate to have been hosted and taught by 100s of communities from the roughly 10,000 communities in the Pacific many of which have been documented to be as practicing community based management –

One thing I have been taught (but perhaps not learned) is that it is better to open the space for communities to share their experiences, than to talk in their stead – I note there are plenty in the room qualified and beg your indulgence for only a few minutes in the interests of turning the floor over to discussion. 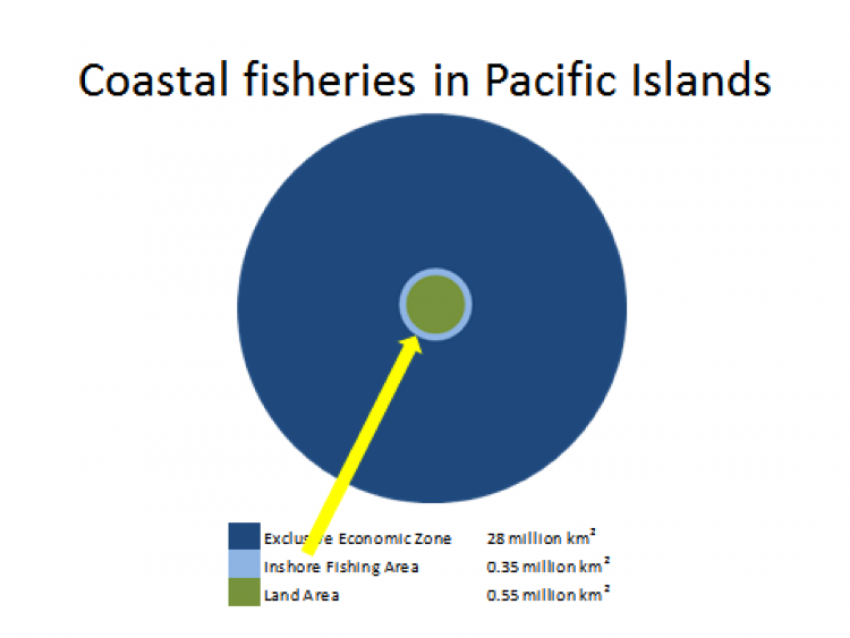 Photo: Hugh Govan
The importance of the work carried out by communities across the globe as highlighted by my colleague from LMMA in coastal resources and fisheries management cannot be underestimated.

Coastal waters represent less than 1.5% of the waters under national jurisdiction but produce most of the marine food and half the fisheries contribution to GDP in the Pacific Islands.

As we have heard – these resources are currently sustained largely because communities still exert the right to control access – traditional stewardship... these rights and the collective action possible in communities are the two main reasons that coastal resources, threatened though they may be, are still able to sustain livelihoods in PI countries.

So it boils down to two things = rights to control, and functioning as a community 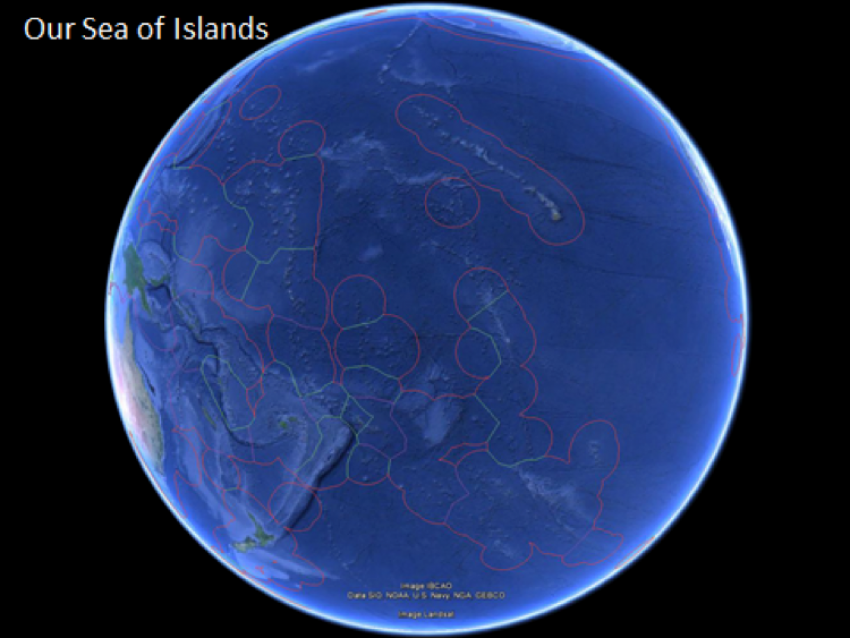 Photo: Hugh Govan
But what about the nearly 30 million Km2 of the oceanic waters under the jurisdiction of Pacific Island countries and the famously valuable tuna resources that swim through them?

These tuna are ultimately worth more than 20 billion to the global community and 3-4 billion to the, mostly distant water, fishing vessels that land them. For decades, the small proportion of the value of these resources that stays with the island countries - and the tendency towards over-harvesting of the industrial fishers - have been bones of contention.

But a remarkable phenomenon has occurred.

The Law of the Sea Convention (LOSC) and other international instruments certainly provided a basis for management and exploitation but long term benefits and sustainability have not seemed likely.

But in the last decade the rights and traditional strengths of the countries through which the majority of the Skipjack tuna swim have served as a basis for improving the returns to countries by as much as 8 times to nearly half a billion dollars in access fees since 20101.

Indications are that at least for Skipjack tuna, this approach does not undermine sustainability and if anything improves the chances of it.

What are the secrets of success?

Just like in the inshore, it relies on the clear rights of coastal states over resources – even migratory ones that pass through their zones. So far these rights have been guaranteed by LOSC.

AND it relies on the existence of a community, not a local one in this case, nor a global one - not even a Pacific Island one - but a community of those countries in the Pacific islands that share the majority of the resources, and thus similar risks and benefits – these are the countries that are Parties to the Nauru Agreement.

It took some doing. Just as in a local community, there are diverse interests and many temptations to stray from the collective good, but the countries (for now) stand together and are able to operate more or less as a cartel in the face of the foreign fishing nations and set their own terms and conditions.

BUT – why are some other major stocks of tuna and especially BigEye tuna in grave condition? 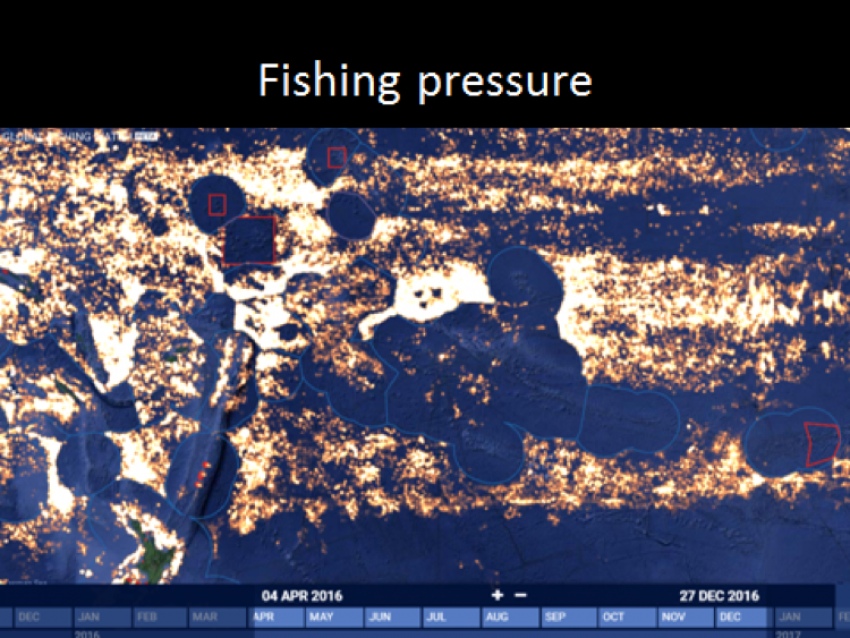 Photo: fishingwatch.org
Well, much of the fishing pressure on these stocks occurs outside of national jurisdiction. In fact, under the oversight of international bodies such as Regional Fisheries Management Organizations, and under a definition of community that includes global power, ironically you have very poor management.

Note that from data provided by fishingwatch.org – it seems clear that effort can be controlled inside national EEZs – the famously promoted large scale MPAs within national EEZs seem to have little if any added value (they may even push fishing outside the areas of national jurisdiction) – but what is clear is that in the High Seas, the fleets are able to concentrate on catching fish entering or leaving national jurisdictions.

It also bodes ill for management of other transboundary or high seas impacts such as waste or seabed mining. 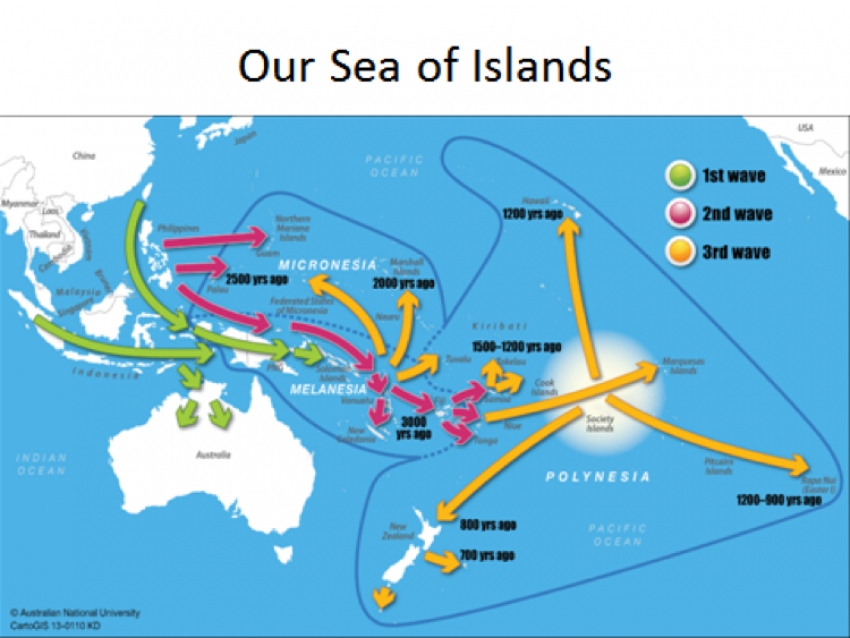 The LOSC may confer rights to the 30 million square kilometers within the national jurisdiction defined by that law… but it seems that the Pacific has demonstrated a degree of stewardship which far outstrips that of international bodies, let alone organizations dominated by foreign commercial interests. 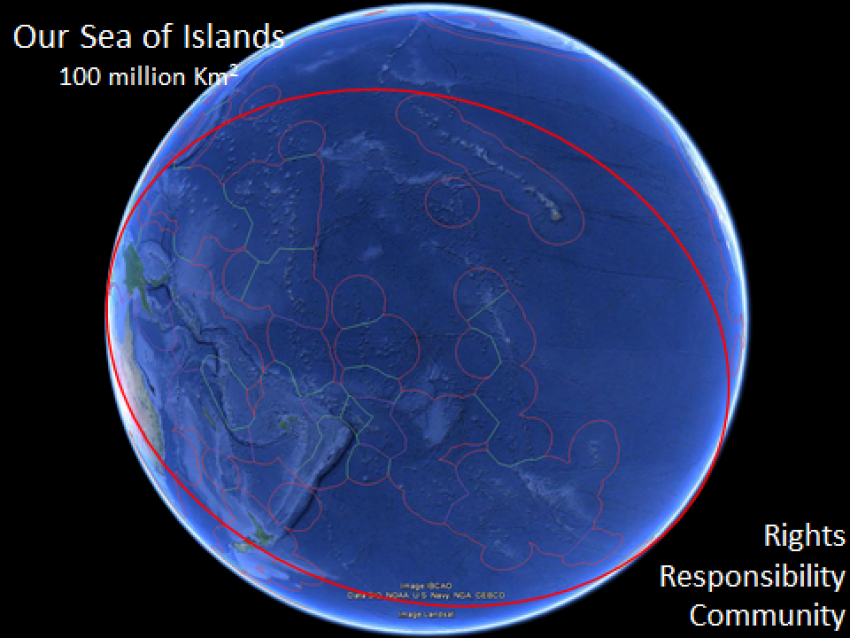