Gharials are a unique crocodilian threatened with extinction and with wild populations that have decreased precipitously due to habitat destruction and accidental killings by fishermen when caught in nets. The Bangladesh Forest Department and IUCN Bangladesh, in collaboration with Bangladesh zoo authorities, have piloted a gharial exchange programme to initiate captive breeding in the country. This will create new scope for the conservation of gharials and possible reintroduction into the wild. In this blog post, Sakib Ahmed and Haseeb Md. Irfanullah of IUCN Bangladesh write about this historic gharial exchange. 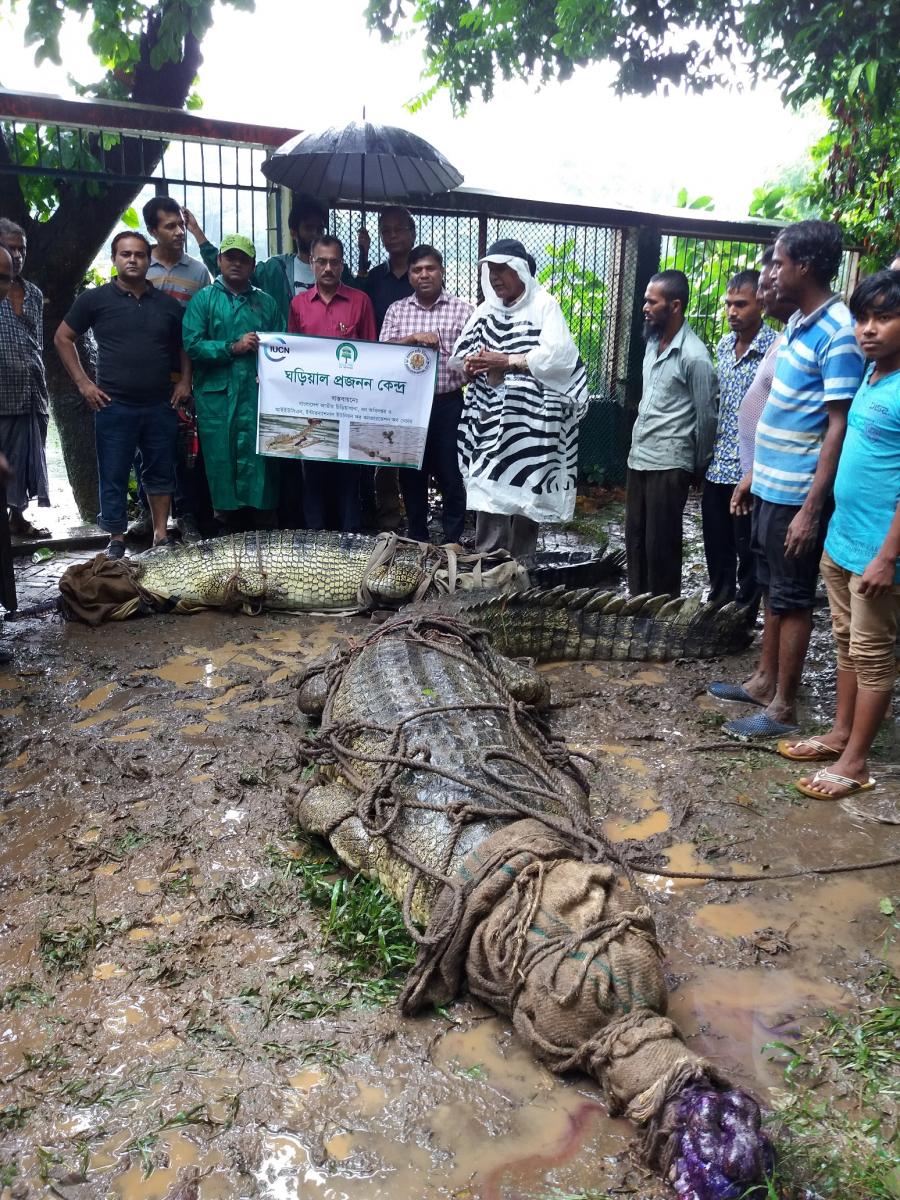 Exchanged female (in the back) and male gharials at Dhaka Zoo, just before releasing the female gharial, 12 August 2017. 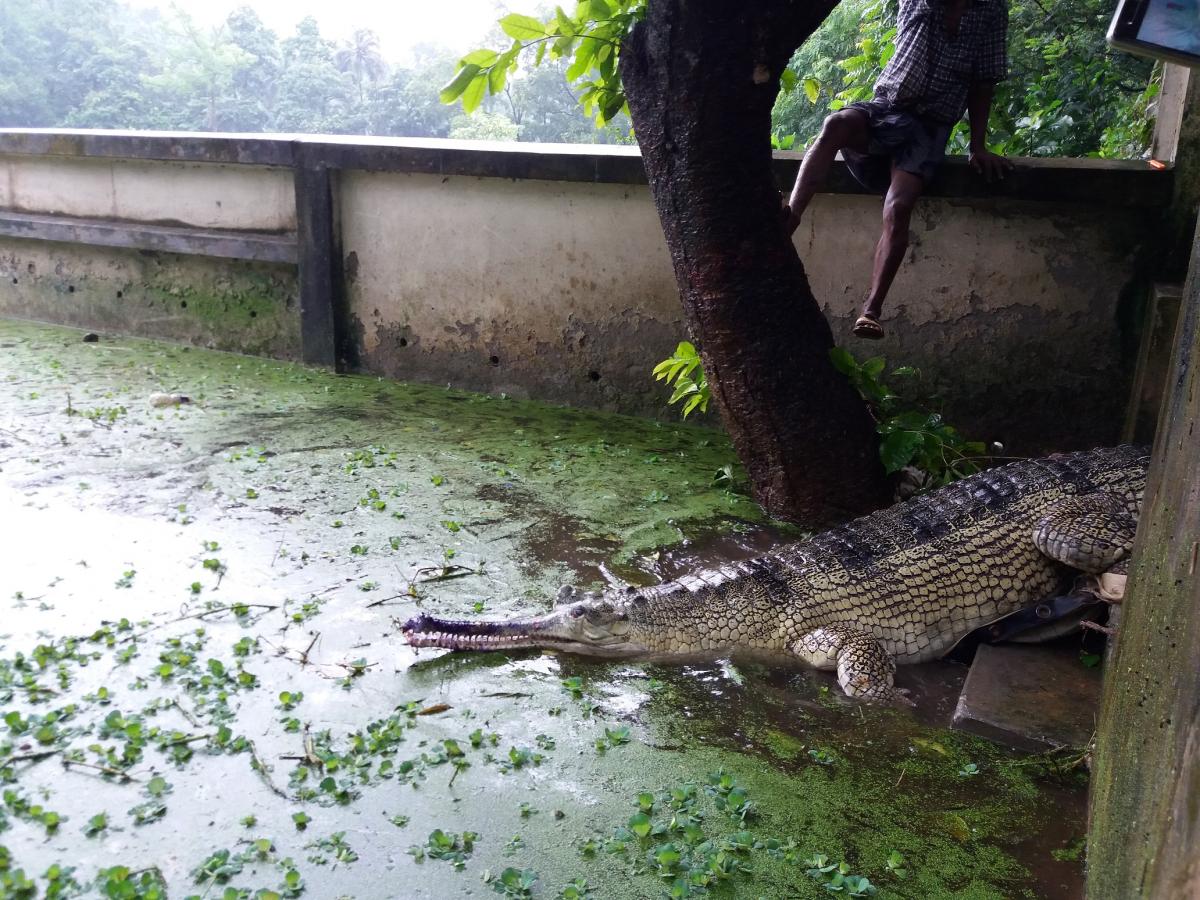 Female gharial (Padma) from Rajshahi Zoo is being released in Dhaka Zoo, 12 August 2017. 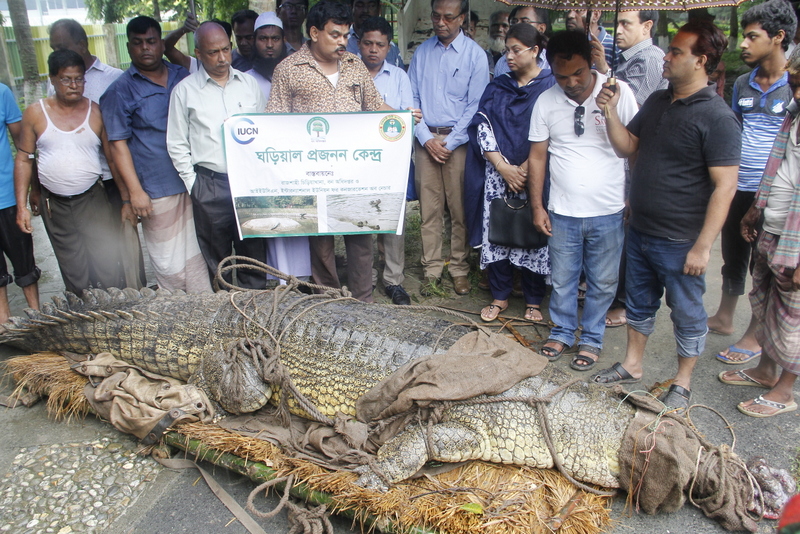 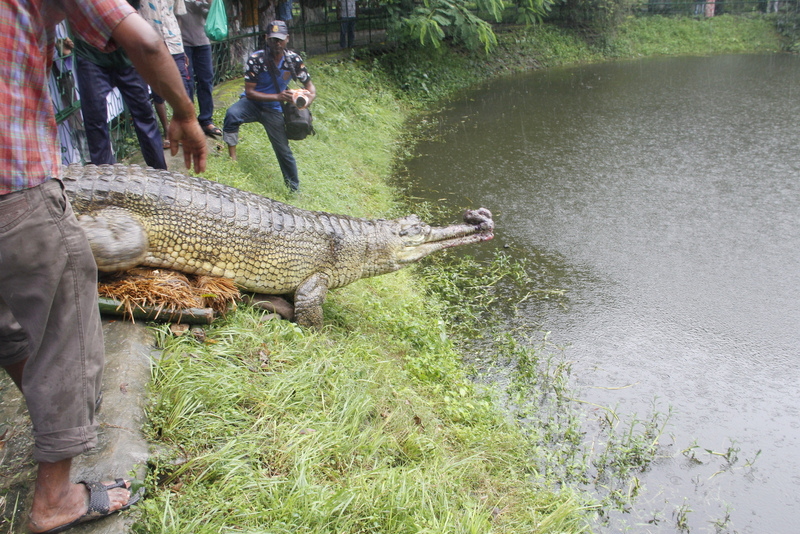 Male gharial from Dhaka Zoo is being released in Rajshahi Zoo, 13 August 2017.

It is estimated that there are fewer than 200 gharials (Gavialis gangeticus) left in the wild and captive breeding and reintroduction is one of the most important conservation measures for the species right now. Currently, three zoos and one safari park in Bangladesh have a total of 12 captive gharials. Unfortunately, no captive breeding has taken place in Bangladesh as the males and females have been isolated at different institutions.

The Bangladesh Forest Department, in collaboration with IUCN Bangladesh, has recently proposed the Gharial Conservation and Management Action Plan. One of the main components of the action plan is to facilitate captive breeding and reintroduction. Rajshahi Zoo had only female gharials and Dhaka Zoo had only males, so it was vital to have an exchange programme.

However, it took time to translate the plan into action. To formalise the process, it was necessary to bring together the zoos and park authorities and get required government permissions. In April 2016, the Bangladesh Forest Department, IUCN Bangladesh and zoo authorities agreed that the first exchange would be between the Dhaka and Rajshahi zoos. All parties involved showed immense eagerness and determination to turn this into a reality.

Finally, after more than a year of formal procedures, the exchange was accomplished this monsoon amid huge excitement and enthusiasm. A female gharial named Padma was transferred from Rajshahi to Dhaka and a male called Gorai was transferred to Rajshahi’s breeding facility on 12 and 13 August 2017, respectively. The male will share the facility with two other female gharials.

The breeding programme has thus been officially launched. It is a milestone in biodiversity and wildlife conservation in Bangladesh. While Bangladesh is known for captive breeding of other threatened species, like the Critically Endangered northern river terrapin turtle (Batagur baska), the gharial captive breeding initiative is exciting, because in Bangladesh, adult gharials are not found in the wild anymore and these two that were exchanged have been in captivity for more than 30 years.

The exchange and captive breeding programme reflects the commitment and determination of the government and conservationists to invest in this charismatic species. The safe transfer of such massive and highly threatened animals had been extremely labour-intensive and logistically difficult and developing the breeding facility required investment of resources and time.

Never before in the country has a conservation process created this much enthusiasm among the general public and media. Reports of this event have been published in every large national news outlets as well as some important international news portals.

Gharials usually start mating from November to January, and nesting occurs from March until May. So, if everything goes according to plan, the exchanged gharials will start to mate during the end of this year and hopefully will produce offspring by mid-2018. Everyone is enthusiastically waiting to see that happen.

This programme, if successful, will create new opportunities for the conservation of the species. A healthy captive population will mean possible reintroduction to the wild as hotspots have already been identified.  With proper management, we hope to bring the gharials back into our rivers.

As of now, both the exchanged gharials are healthy and there have been no complications.