More than 7.5 million people live in the Sundarbans and depend on its ecosystem services. However, the rapid economic growth in both Bangladesh and India and changes in land use are threatening the Sundarbans ecosystem. The Mangrove forests and biodiversity it holds is declining directly affecting the livelihoods of local communities. 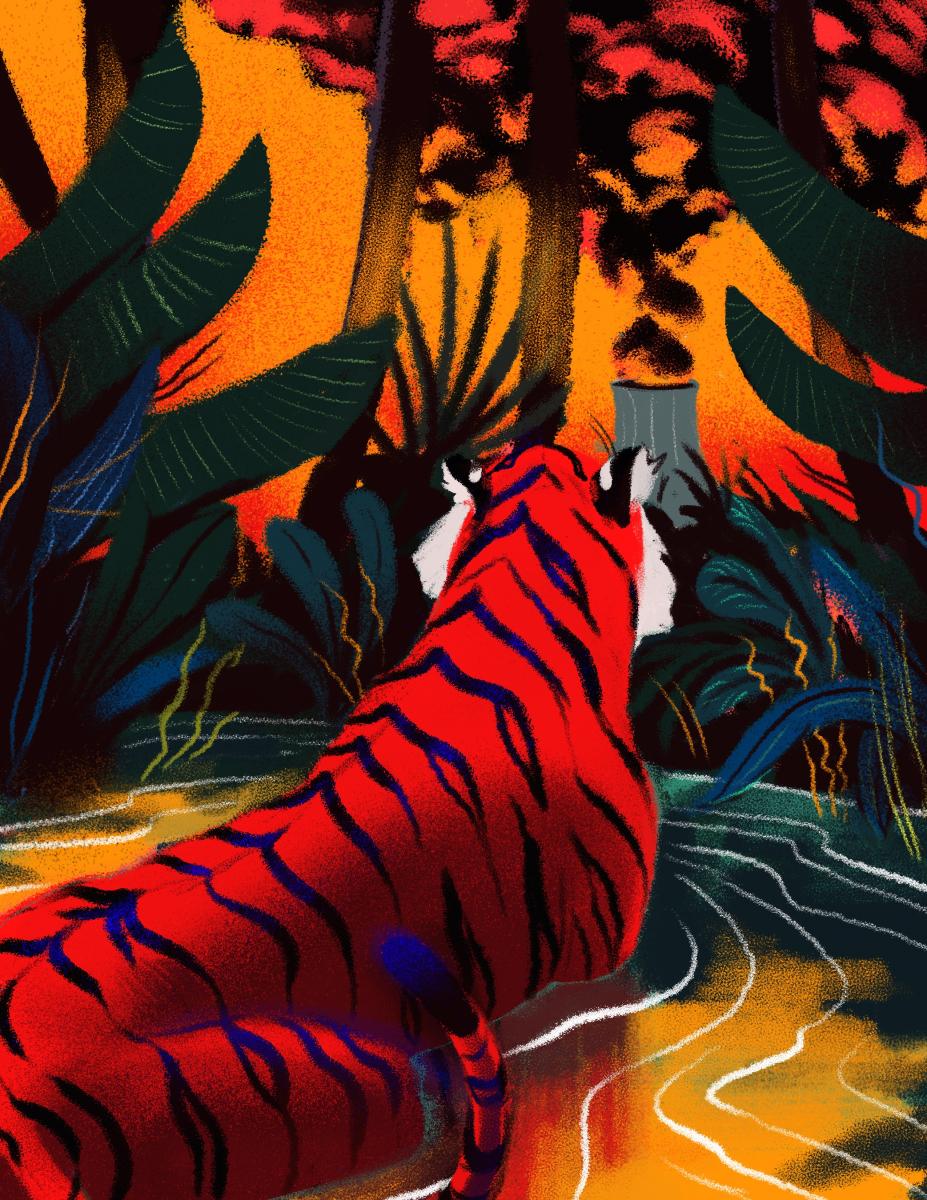 The Sundarbans – a unique ecosystem, home to a plethora of biodiversity

The Sundarbans covers a transboundary landscape of approximately 10,000 sq. km encompassing two countries. It extends from the Hooghly River in India to the Baleswar River in Bangladesh. It lies within the vast delta formed by the confluence of the Ganga, Brahmaputra, and Meghna (GBM) rivers in the Bay of Bengal.

The Sundarbans is characterised by a complex network of tidal waterways, mudflats, and small islands of salt-tolerant mangrove forests in the estuarine zone and coastal areas. This diversity of habitats in Sundarbans supports more than 2,000 species of plants and animals including a number of endemic and critically endangered species. It is the only mangrove habitat in the world inhabited by endangered species such as the Royal Bengal Tiger, Ganges and Irrawaddy dolphins, estuarine Crocodiles, and the endemic River Terrapin (Batagur baska).

The flora and fauna in the Sundarbans is adapted to live in an environment of high salinity and anaerobic soil conditions. For example, mangroves have developed adaptive breathing roots that grow up to 3 feet above the ground, the Rhesus Macaque monkeys have adapted to eating fish and crabs, and tigers have learned to drink saltwater and capture fish in the water.

More than 7.5 million people live in the Sundarbans and depend on their ecosystem services. It provides provisioning services such as food, timber, fuel, fish, and honey, and the mangrove forest serves as a buffer for local communities from cyclones and tidal waves.

However, with the rapid economic growth in both Bangladesh and India and changes in land use are threatening the Sundarbans ecosystem. The Mangrove forests and biodiversity it holds is declining directly affecting the livelihoods of local communities. There is an urgent need for sustained efforts from governments and civil society to conserve this World Heritage Site.

The governments of Bangladesh and India are confronted with the challenge of balancing development against the needs of conservation. Growing the economy is often at the cost of preserving the planet; with sustainable alternatives requiring higher budgets, often considered unaffordable by developing countries.

The problems are compounded by the transboundary nature of the Sundarbans. The habitat is under the management of two countries, this creates a need for harmonized policies and joint planning by Bangladesh and India to preserve this natural heritage.

There are instances of cooperation between Bangladesh and India on the conservation of biodiversity. In 2011, the governments of India and Bangladesh signed a Memorandum of Understanding (MoU) on 'Conservation of the Sundarban.' Following the MoU, in 2015, the two countries collaborated to conduct a joint census of Royal Bengal Tiger.

Both countries have also developed laws regulating the developments close to the Sundarbans’ forest. India prohibits thermal power plants within a 25 km radius and Bangladesh has declared a 10 km radius surrounding the Sundarbans Reserve Forest as an Ecologically Critical Area. However, there are also challenges to the implementation of these policies.

Big infrastructure development projects are being planned in the Sundarbans. India’s state-owned National Thermal Power Corporation (NTPC) and the Bangladesh Power Development Board (BPDP) have collaborated to set up a 1320 MW coal-fired Rampal power plant in Bangladesh.

Still, the troublesome questions remain. What will be the impact of the massive Rampal power plant, located only 14 km away from the Sundarbans? Or the five (5) polluting cement factories constructed as recently as 2019, only 6 km away from the reserved forest in Bangladesh? While both countries have laws to protect the environment, these are sometimes circumvented to make way for industries with negative impacts on the environment.

The building of roads, mines, and industries fragments the Sundarbans forest and causes a loss of habitat for the species inhabiting it. As Shamsher Ali, a member of Life and Nature Safeguard Platform (LNSP) points out, “While Bangladesh law restricts entry of local people into the forest and hence their means of livelihood, the Ministries of Industry and Energy permit the construction of red categories of industries near the mangrove forest.”

New factories bring with them more cargo vessels into the Bay of Bengal and increased pollution. In recent years, eight vessels have capsized in these waters, including MV Bilash carrying 775 tonnes of coal. It is estimated that around 375 tonnes still remain in the river. Bangladeshi newspaper Prothomalo reports Prof. Mahmood Hossain of the Khulna University saying, coal containing sulfur and other toxins could cause river erosion and change the course of the channel.

As industry and pollution further destroy the ecosystem, it is inevitable that local communities will see a steady reduction in resources, which will alienate them further.

Biodiversity must be conserved to ensure a functioning ecosystem, which can continue to provide livelihoods for the people living in Sundarbans. The governments should deploy a multi-pronged approach involving legislation, community engagement, and attempts to create awareness on the values and threats to the Sundarbans ecosystem.

Both governments must respect the boundaries and regulations of conservation areas. The environmental impact must be assessed before new factories are set up, and industries on the outskirts of the forest must adopt cleaner end-of-pipe processes with treatment units for spent chemicals and air pollution controls. Factories with zero discharge policies should be incentivised while polluting plants should be penalised with higher taxes.

Industries linked to forest resources, such as processing of honey, canning of local fruit and a cold chain for seafood should be established, involving the local communities, in order to reduce dependence on natural resources and the burden on the ecosystem.

Arun Roy, the former Advisor to IUCN and Inland Waterways Authority of India (IWAI), says, “In recent years the Indian government, due to the scrutiny of Civil Society Organisations (CSOs) and an unforgiving media, has become more vigilant towards human encroachment into the Sundarbans Biosphere and Tiger reserve.”

Media reports make governments more accountable, increase public awareness, and bring about greater participation from non-state actors who are able to integrate with communities and have a greater impact at the grassroots level.

A review of media reporting on Sundarbans suggests, more than 66% of recent reports highlighted environmental issues. An example of the positive impact of media reporting is seen in the case of reforms made at the Rampal site. Extensive media coverage and the collaborative efforts by more than 70 Civil Society Organisations urged UNESCO to protect the Sundarbans from the impact of this project. The Bangladeshi government has promised to complete a Strategic Environmental Assessment of the Sundarbans by the end of 2021, and give environmental safety the highest priority in this area.

Collaborative implementation of policies, integration with communities, and creating awareness will go a long way in conserving the biodiversity of this UNESCO World Heritage site.

International Union for Conservation of Nature (IUCN) is the official advisor on natural World Heritage. In 2019, due to a variety of threats faced by the Sundarbans, IUCN recommended putting the Sundarbans on a list of natural sites in danger.

The writer, Aman Jathanna is a student of the Bombay International School and an animal conservation enthusiast. This young researcher is a regular volunteer helping stray dogs in Mumbai. His plans include working on otter conservation on the Niyata River later this year. He wrote this blog under the guidance of Vishwa Ranjan Sinha, Programme Officer, Water and Wetlands, South Asia, Natural Resources Group, (IUCN) International Union for Conservation of Nature, Thailand, Bangkok.